DARPA envisions a future in which U.S. Special Forces or spooks have to assault underground bases. And the Pentagon agency... 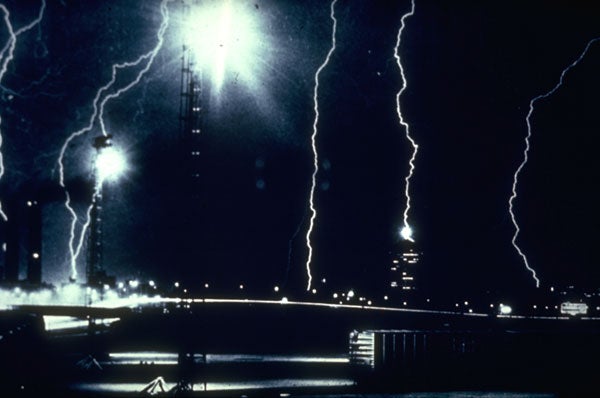 So if lightning strikes position a, b and c . NASA
SHARE

DARPA envisions a future in which U.S. Special Forces or spooks have to assault underground bases. And the Pentagon agency wants to give those warriors an underground navigation system that works on lightning bolts, The Register reports.

The Global Positioning System (GPS) has transformed how both the military and civilians get around, courtesy of a satellite network that can triangulate a person’s position on an interactive navigation map. But such a system only works on the Earth’s surface, and so it’s useless for military or intelligence operatives who need to infiltrate underground lairs.

An underground receiver carried by warfighters or spooks might receive info on lightning strikes from a surface base station, and then calculate its own position based on strikes coming from several directions. Maybe it’s just pure coincidence that DARPA also started a separate initiative recently aimed at controlling lightning.

A U.S. teen inventor applied the same idea to create a cave radio capable of communicating with the surface from deep underground. That sort of device might also prove handy for underground special ops.

DARPA began the S-BUG investigation last year, and now plans to hold a secretive conference with tech firms interested in tackling the project. Given that the U.S. Air Force has also recently voiced an urgent need for GPS alternatives, we wouldn’t be surprised if some Air Force brass at least show up to take notes.