Those of you who weren’t completely immersed in Duke’s nail-biter of a victory over Butler in the NCAA basketball title... 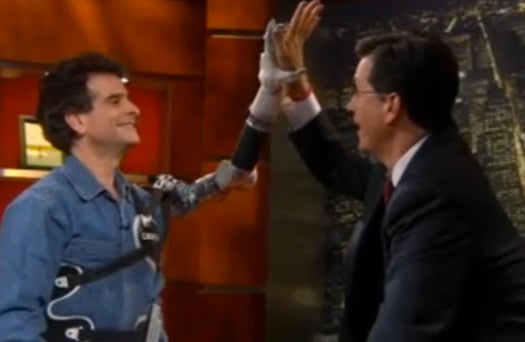 Those of you who weren’t completely immersed in Duke’s nail-biter of a victory over Butler in the NCAA basketball title game last night may have noticed that Stephen Colbert had inventor and sci-tech evangelist Dean Kamen appear as the headlining guest on last night’s Colbert Report showing off the latest version of DEKA Labs’ most exciting brainchild: the Luke Arm.

Named for Luke Skywalker (who else?), the Luke arm began as part of DARPA’s Revolutionizing Prosthetics program and has evolved into one of the most sophisticated prosthetic limbs ever produced. And Kamen, never one to miss a good opportunity to tout the benefits of science and technology, gave viewers an impressive firsthand demonstration of just how far the arm has come since DEKA Labs undertook the project in 2005:

The idea behind DARPA’s funding of the arm, of course, is to create a neurally-controlled limb that will help amputees function much as they did before losing a limb – particularly those amputees returning home from Iraq and Afghanistan after losing limbs. As Kamen shows Colbert, we haven’t quite achieved Skywalker-like seamless bionic control, but we’re getting closer all the time.