Soldiers already have plenty of nighttime tech to help them navigate battlefields, but goggles can be clunky and obtrusive, and... 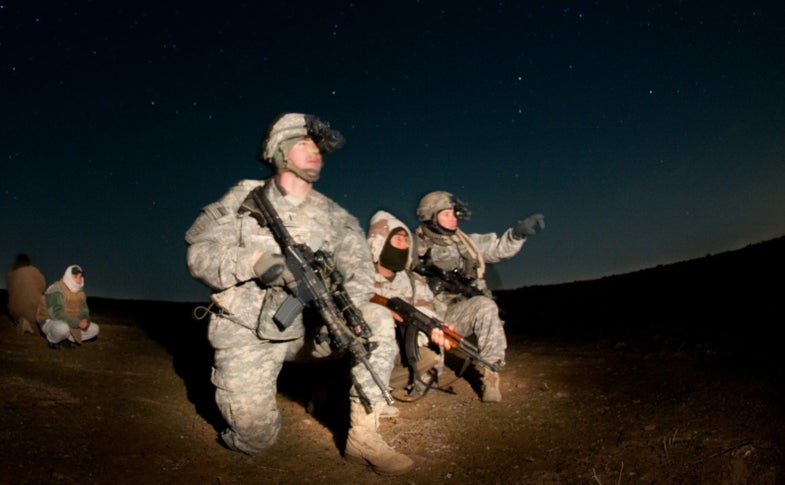 Soldiers already have plenty of nighttime tech to help them navigate battlefields, but goggles can be clunky and obtrusive, and backlit GPS displays can betray a lurking warfighter’s position. A new haptic interface developed by Army researchers will help soldiers feel their way through the darkness instead.

Researchers at the Army Research Office developed a vibrating belt with eight mini actuators — “tactors” — that signify all the cardinal directions. The belt is hooked up to a GPS navigation system, a digital compass and an accelerometer, so the system knows which way a soldier is headed even if he’s lying on his side or on his back.

The tactors vibrate at 250 hertz, which equates to a gentle nudge around the middle. Researchers developed a sort of tactile morse code to signify each direction, helping a soldier determine which way to go, New Scientist explains. A soldier moving in the right direction will feel the proper pattern across the front of his torso. A buzz from the front, side and back tactors means “halt,” a pulsating movement from back to front means “move out,” and so on.

Researchers led by Elmar Schmeisser and Linda Elliott at the Army Research Office have been testing the belts on various Army personnel as they performed a series of training exercises, both at night and during the day. The subjects had to respond to requests for information, search for targets and navigate at the same time, New Scientist reports. They liked it because they didn’t have to take their eyes off their surroundings or put down their weapons to fumble with a GPS, Elliott told NewSci.

The researchers are now working with a company that makes a haptic glove system, like the one we saw here, to allow platoon leaders to communicate with standard military hand gestures.

Elliott is presenting research on the haptic belt at a Human-Computer Interaction conference in Orlando in July.