Happy 40th Birthday, Internet! Five Milestones in the Ever-Evolving History of the Web

Yes, hard to believe, but it was 40 years ago today that the first two nodes of what would become... 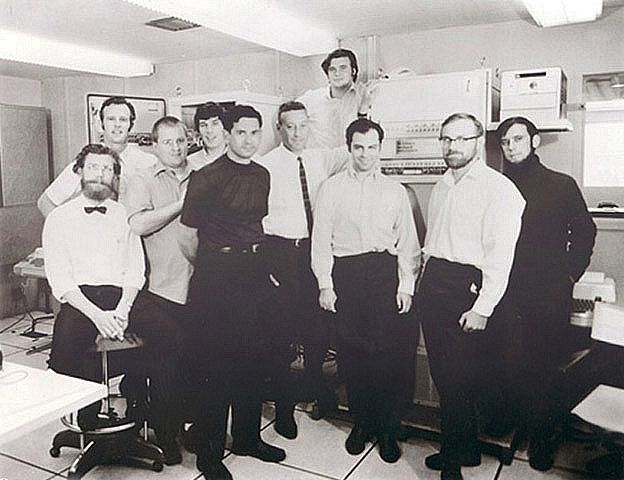 A group of BBN programmers, the builders of Arpanet.

Yes, hard to believe, but it was 40 years ago today that the first two nodes of what would become Arpanet connected, thus beginning the Internet As We Know It. In the ensuing four decades, the Internet would change our world as profoundly as radio and the printing press had before it. So to celebrate, we’ve compiled five milestones in the Internet’s young life. 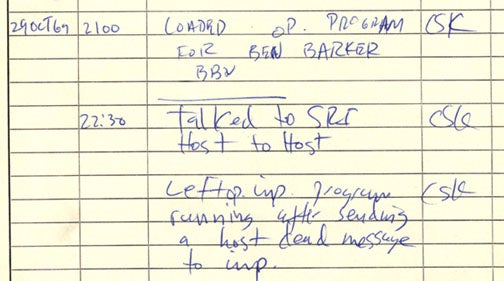 Detailing the first message sent on Arpanet from the node at UCLA to the host computer in Menlo Park, CA.

The story often goes that the Internet began as a means to maintain military command and control in the event of a nuclear war, and while that was surely in the back of everyone’s mind, Arpanet was established mostly as a way to cut down travel time for computer scientist. Back in 1962, when Joseph Licklider first began thinking about computers talking to each other, a computer took up an entire room, and users had to schedule time on the few powerful computers available around the country.

Rather than moving around to different massive mainframes, the Arpa scientists wanted to link the computers so a researcher at one institution could do work on a computer on the other side of the country without physically being there. By October of 1969, the first electronic message was sent from UCLA to Stanford: only the letters ‘l’ and ‘o’ (for ‘login’) made it through before the system crashed (the first Web outage!), but it was enough to set in motion a system that would in a remarkably short time change the world.

1992: The Commercialization of the Network

For the next 23 years, the networks that succeeded Arpanet as the backbone of the Internet (like the National Science Foundation’s NSFNet, which linked supercomputers via TCP/IP) remained institutions-only affairs, with commercial online services like Prodigy and Compuserve maintaining their own private dial-up networks and bulletin board services.

Then, in 1992, Congress passed the Scientific and Advanced Technology Act, opening up NSFNet to commercial connections. This essentially freed up the Internet from government control, and three years later, the National Science Foundation relaxed all regulations on the usage of its institutional networks. The day of the commercial Internet had begun, and to this day, the majority of the infrastructure of the Internet remains in commercial hands.

While U.S.Government institutions wrestled with the formation of the Internet’s main infrastructure, what would be come the Internet As We Know It, the World Wide Web, was being developed in Europe. Over at CERN, a British scientist named Tim Berners-Lee was inventing the Internet.

As early as 1989, Berners-Lee toyed with the idea of web pages and hyperlinks, and within a year, he had created the first web browser, the first web server (serving the first web page, still archived here), and the foundations of HTML. Soon after, in October 1993, there were over 200 web servers operating worldwide, and the first popular graphical browser, Mosaic, to view them.

Unbelievable how in less than ten years, we went from the Web existing as an idea in Tim Berners-Lee’s head to downloading MP3s for free. Just as the public began to get used to the idea of surfing websites for information, a college student named Shawn Fanning drastically changed how most people used the Internet. In 1999, Fanning released Napster, the first file sharing program to receive wide spread use. Overnight, college students around the nation used their high-speed connections to swap millions of songs, changing music and computers forever.

The spiritual descendants of Napster, iTunes and Bit Torrent continue to dominate how users interact with the Internet and consume media, legally and not-so-legally.

Until 2007, using anything other than a computer to access the Internet was cumbersome, expensive and uncommon. Then came the iPhone. The iPhone of course wasn’t the first phone that integrated email, or even the first phone that let users access the Web, but it was the first platform that provided a mobile Web experience that closely matched surfing on a computer. With well over 20 million iPhones sold worldwide, and competing platforms like Android, webOS and Blackberry further refining the browsing experience, surfing the Web on a phone is the rule, rather than the exception.

Wow, I hope that didn’t make the Internet feel old! Besides, age is just a number, and other than getting a little gray around the temples, you can hardly tell. Plus, since 40 is the new 30 anyways–something tells me the Web still has plenty of surprises for us.