After years of development and several creepy videos, Boston Dynamics’ Big Dog robot is scheduled to get bigger. Working off... 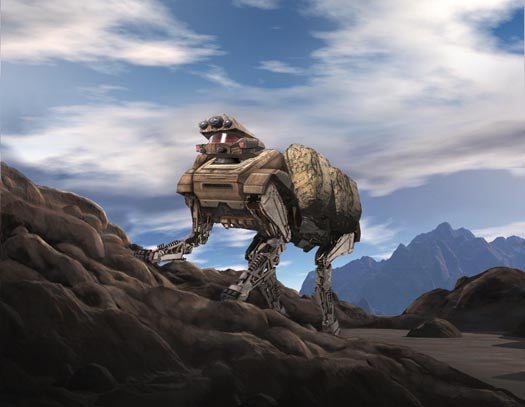 After years of development and several creepy videos, Boston Dynamics’ Big Dog robot is scheduled to get bigger. Working off a $32 million request from DARPA and the Marine Corps, Boston Dynamics has developed a souped-up version of the quadrupedal Big Dog robot called the the Legged Squad Support System (LS3). This new robot will have a longer range, heavier carrying capacity, and more agility than its predecessor.

Boston Dynamics designed the original Big Dog as a robotic replacement for flesh and blood pack animals. Mountainous or uneven terrain often proves impassible even for hardy vehicles like the Humvee, forcing soldiers to carry heavy loads themselves or forsake equipment entirely. The agile Big Dog robot would carry that equipment, lightening the load for the soldiers, or allowing them to bring even heavier systems through nearly impassable terrain. The LS3 serves the same function, only more so.

The original Big Dog can carry a load of 340 pounds almost 13 miles at a pace of four miles per hour, while being remotely operated by a human. Plus, it’s agile enough to navigate a 30 degree incline.

The LS3, on the other hand, will carry a 400 pound load 20 miles, only refuel every 24 hours, and use a mixture of cameras and GPS signals to follow a squad autonomously. Boston Dynamics also plans to make the LS3 faster than the original Big Dog, and even capable of jumping over obstacles.

The Big Dog gained a degree of Internet fame through videos showing off it’s remarkable capabilities and animal-mimicking gait. Unfortunately, it’s going to be at least another 30 months before Boston Dynamics releases similar video of the LS3, so that awesome concept art, featuring a very Halo-esque head for the robot, will have to sate our robotic pack mule hunger until then.