In the U.S., people needing a new lung wait more than a year on average for an organ. That’s often... 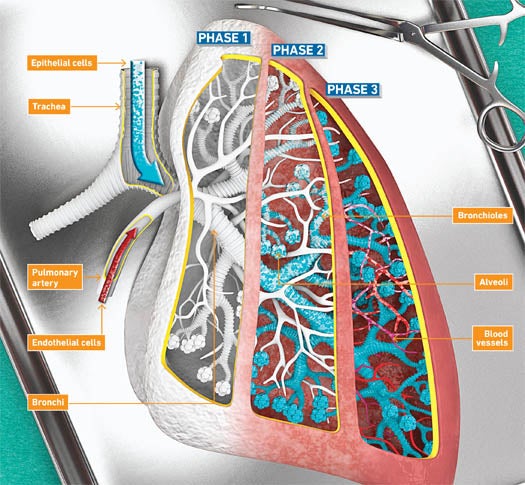 In the U.S., people needing a new lung wait more than a year on average for an organ. That’s often too long—237 people on the transplant list died in 2009. Recent advances in cell regeneration, however, could someday allow a patient to “donate” a healthy lung to himself in just a month.

This summer, scientists demonstrated the first functional replacement lung in a rat. The technique follows what’s becoming a standard practice in regenerative medicine, but the lung is the most complex organ copied so far. Biomedical engineer Laura Niklason’s group at Yale University removed a rat’s lungs and stripped away the cells, leaving an inanimate scaffold of collagen and other connective tissue. They seeded the scaffold with malleable lung cells harvested from other rats, which multiplied to form new airways and blood vessels. After just eight days of growth, the lungs were transplanted into yet other rats, where they oxygenated blood 95 percent as well as a normal, healthy organ.

Custom-made human lungs are still years off. To prevent a patient’s immune system from attacking a new organ, doctors need to perform the reseeding step with cells from that patient’s own body; Niklason’s group can’t yet do that even with rats. Figuring out how to produce adult stem cells that will develop into the correct types of lung cells and not form tumors has proved difficult, although other researchers have made progress with other cell types. Niklason thinks it will take about 20 years before she can rejuvenate a human lung, but she intends to see it through. As she puts it, “I didn’t get into this to make lungs for rats.”

HOW TO REMAKE A LUNG

PHASE 1: Strip It
Scientists fill a rat lung with a detergent that removes the organ’s cells, leaving behind only its inanimate collagen-based scaffolding. This is then placed in a standard nutrient-rich liquid that promotes cell growth.

PHASE 2: Build the Airways
Scientists pump epithelial cells extracted from baby rat lungs into the trachea scaffolding, which leads into other empty airways. The cells stick to the scaffolding and multiply to form the bronchi, bronchioles and alveoli, the tiny air sacs that exchange oxygen and carbon dioxide with the blood.

PHASE 3: Construct the Vessels
Making blood vessels is similar. This time, endothelial cells harvested from rat lungs are injected into the scaffolding of the lung’s pulmonary artery. The cells grow to form the lung’s veins, arteries and capillaries.