Robots are a major part of the cultural fabric of Japan; they’re performing weddings, buying groceries and keeping people company.... 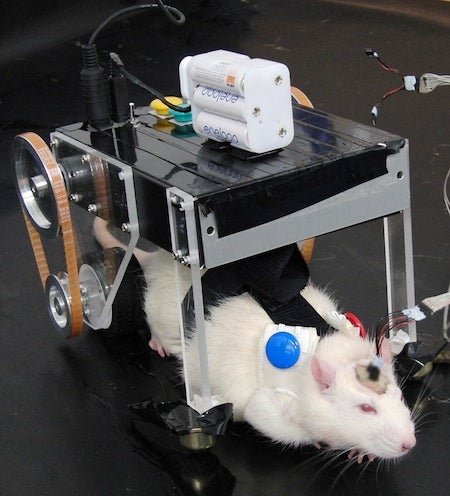 Robots are a major part of the cultural fabric of Japan; they’re performing weddings, buying groceries and keeping people company. A team of researchers at the University of Tokyo is taking this robotic cultural immersion a step further — they’re making animal-robot hybrids. Sort of.

RatCar is a brain-machine interface that uses a rat’s brain signals to control a motorized robot. The rat hangs in the air, and the robot does what the rat’s limbs would do. It’s far from the only brain-robot locomotion contraption, but it’s arguably one of the strangest.

Osamu Fukayama and colleagues developed RatCar to study whether a small vehicle could be controlled by the brain signals that move rats’ limbs. Unlike less-invasive, EEG-based brain-machine interfaces, the system involves implanting tiny neural electrodes in a rat’s brain.

The rat is suspended from a small lightweight “neuro-robotic platform,” as IEEE Spectrum reports. The goal is to make the vehicle and the rat work together to move forward. Brain-control interfaces like this could be a boon for people with locked-in syndrome or various other disabilities.

The system also includes several models and algorithms that explain the correlation between recorded neural signals and the rat’s movement, as Fukayama explains.

Researchers trained the rats by making them tow the car, motors turned off, around an enclosed area. A camera tracked the rats’ movement and fed data into a modeling program, which pieced together signals from the motor cortex. Then, the rats were hung from the car so their limbs barely touched the floor. The researchers switched the motors on, and as they tried to move, their neural signals were used to drive the car. Six out of eight rats adapted well and were able to get around with the car, according to IEEE Spectrum.

It’s not clear how much the rats’ wriggling might have affected the car’s movement, however. Fukayama and colleagues Takafumi Suzuki and Kunihiko Mabuchi want to perform more experiments to address that question.

They have been working on RatCar for several years and presented their most recent work last month at the IEEE Engineering in Medicine and Biology Society annual conference in Buenos Aires.