In 2002, Matthew Rosen won a NASA grant to study how gravity affects the lungs. He soon found out what...

In 2002, Matthew Rosen won a NASA grant to study how gravity affects the lungs. He soon found out what lung specialists already know: An MRI scanner reveals how well a lung moves air, but it only works when the patient is lying on his back. What Rosen really wanted to see is how air moves when a person is upright, so the Harvard University physicist built a scanner that can look at the lungs no matter what position the subject is in. 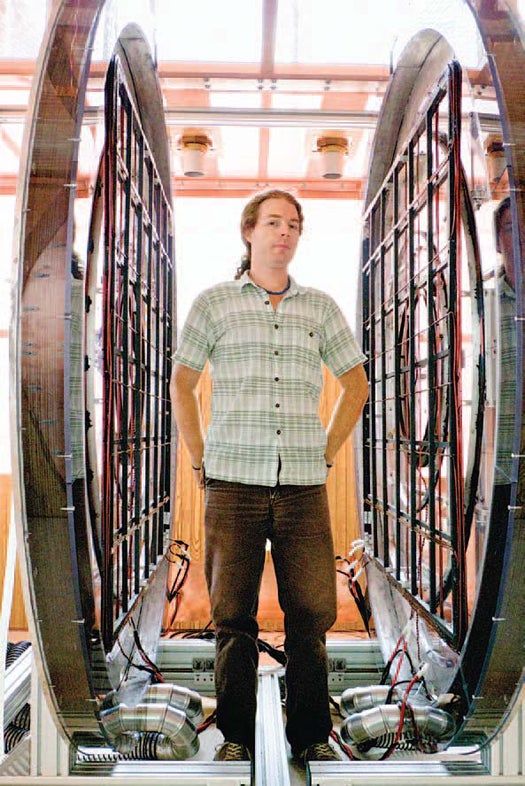 Rosen and His DIY MRI

How it works: A patient stands in the scanner, wearing a vest connected to a computer, and inhales magnetized helium. The machine’s electrified copper coils generate a weak magnetic field, causing the helium atoms to rotate. The vest detects the orientation and position of the helium atoms and sends the data to a computer, which turns it into an image of airflow through the lung.

Standard MRI machines create a magnetic field that orients the hydrogen within body tissues’ water molecules in one direction. A computer detects those molecules and constructs a 3-D visualization of an organ. To show how air moves through lung tissue, doctors have patients inhale magnetized helium gas, the molecules of which align with the MRI’s magnetic field as they pass through the lungs, creating a map of the gas’s travel.

Working in his lab’s basement, Rosen built his MRI from copper wire and sheets of aluminum. Very little magnetic energy is needed to rotate the helium enough to create a high-resolution image, allowing Rosen to forgo million-dollar superconducting magnets. As a result, his machine is 1/20 the cost of a typical MRI scanner. That price cut could put it in the hands of every pulmonologist, who could use it to examine asthmatics during an attack to gauge the effectiveness of medication or screen patients for chronic obstructive pulmonary disease, which often goes undiagnosed until its symptoms are irreversible. “It’s rare that the cheaper thing is better than the expensive thing,” Rosen says. “But we’re getting the first real pictures of lungs.”

Several medical companies have expressed interest in the device, and Rosen thinks it could go on sale in five years. “No other system provides the details that his does,” says Bruce Rosen (no relation), the director of the lab at Massachusetts General Hospital that is testing the scanner. “Matt’s work is exactly on the money.”