Is the truth out there? Decoding the Pentagon’s latest UFO report.

How to think about recent information on UAPs, or Unidentified Aerial Phenomena. 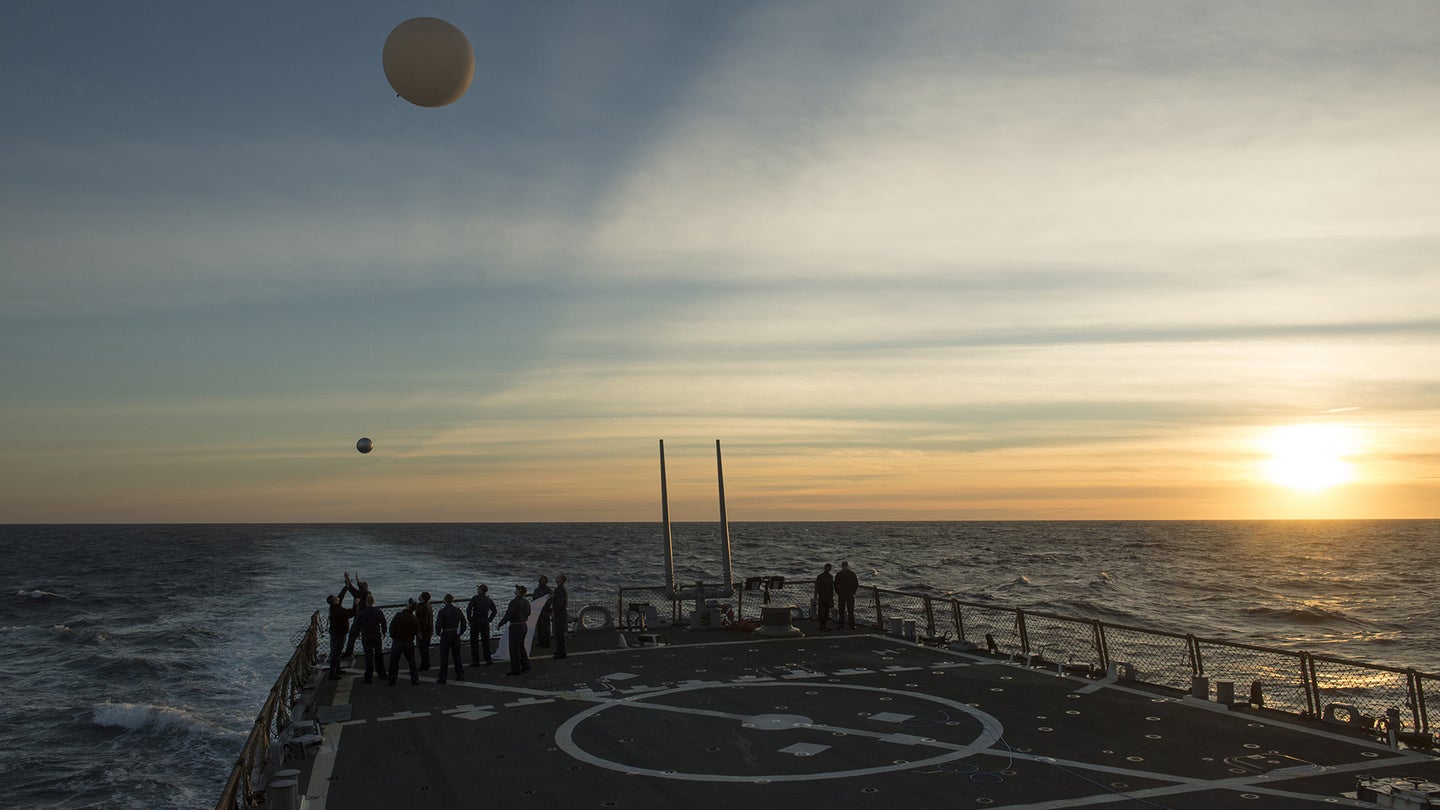 A weather balloon with a metal sphere below it was released from the guided-missile destroyer USS Donald Cook in January, 2014. US Navy / Adam Austin
SHARE

On January 12, the Office of the Director of National Intelligence released the 2022 Annual Report on Unidentified Aerial Phenomena, or UAPs. The term “UAP,” which is largely synonymous with the original usage of Unidentified Flying Object, or UFO, is designed to be a broad category for reporting observed but unexplained sights in the sky, a kind of “see something, say something” for pilots.

The report, mandated by the National Defense Authorization Act for 2022, includes the work of the All-Domain Anomaly Resolution Office, or AARO, which was originally created within the Department of Defense in 2020 as the Unidentified Aerial Phenomena Task Force. “All domains” means the phenomena need not be flying in the sky, but could also occur at sea, in space, or on land.

This is the second report on UAPs since the creation of the task force, following a preliminary report released in 2021. In the preliminary report from two years ago, the task force identified 144 sightings over the previous 17 years. In the new report, there are a total of 510 sightings, including those 144 already documented, 247 new ones made since the first report, and 119 reports of events prior to 2021 but that were not included in the initial assessment, for a total of 366 newly identified reports.

[Related: UFO research is stigmatized. NASA wants to change that.]

The majority of new reports come from US Navy and US Air Force “aviators and operators,” who saw the phenomena during regular operations, and then reported those sightings to the newly created appropriate channels, like the AARO.

The official takeaway? “AARO’s initial analysis and characterization of the 366 newly-identified reports, informed by a multi-agency process, judged more than half as exhibiting unremarkable characteristics,” the document notes. Of those unremarkable reports: 26 were drones or drone-like, 163 were balloons or balloon-like, and six were clutter spotted in the sky.

That leaves 171 “uncharacterized and unattributed” remaining from the batch of newly identified reports, a group that is perhaps thought of more as unresolved than unexplainable. Of those, some “appear to have demonstrated unusual flight characteristics or performance capabilities, and require further analysis,” though anyone looking for that analysis in the report will be sorely disappointed.

Tracking, cataloging, and identifying unexplained—or at least not immediately explainable—phenomena is tricky work. It has created persistent problems for the military since the first panic over “flying saucers” in the summer of 1947 (more on Roswell in a moment), and it persists to this day. Part of the impetus for a task force to study UFOs, or UFOs under the UAP name, came from a series of leaked videos, later declassified by the military, showing what appear to be unusual objects in flight.

One of the more famous UAP sightings this century is the “Tic Tac,” spotted by Navy pilots flying southwest of San Diego on November 14, 2004. The pilots captured video of the object, which appeared small and cylindrical, and changed direction in flight in an unusual way. This video was officially released by the Navy in 2020, but which had found its way onto the internet in 2007, and was the centerpiece of a New York Times story about UFO sightings in 2017. New documents released by the Navy on January 13 show that formal reports of the so-called Tic Tac never made it beyond the 3rd Fleet’s chain of command, effectively leaving the report stranded within part of the Navy.

As PopSci sister publication The War Zone notes, “the Navy and other U.S. military officials have publicly acknowledged that there were serious issues in the past with the mechanisms available, or lack thereof, through which pilots could make such reports and do so without fear of being stigmatized.” The released documents show that, indeed, the pilots faced stigma for the report afterwards.

None of that explains what the object in the “Tic Tac” video is, or what other still-unidentified phenomena might actually be. But it does suggest that the existence of an office responsible for collecting such reports has made it easier for such phenomena to be collected and analyzed, rather than kept quiet by pilots afraid of ridicule or having their judgment questioned.

Everything unidentified is new again

Part of the challenge of thinking about UFOs, and now UAPs, is that by asking people to report unusual sightings, people may interpret what they see as directly related to what they are being asked to find. Tell someone to take a walk in the woods and keep their eye out for rodent sightings, and every shadow or scurrying creature becomes a possible identification.

The Army observation balloon that crashed in Roswell, New Mexico, in 1947 was discovered almost a month before it was reported to local authorities. The summer of 1947, early in the Cold War between the United States and the USSR, saw a major “flying saucer” panic, as one highly publicized sighting led people across the nation to report unusual craft or objects.

These reports eventually became the subject of study in Project Blue Book, an Air Force effort to categorize, demystify, and understand what exactly people were reporting. When the Air Force concluded Project Blue Book in 1969, it did so noting that 90 percent of UFOs were likely explainable as ordinary objects, like planets in twilight or airplanes at odd angles.

As documents later declassified in the 1990s revealed, the military knew even more of the sightings to be explainable, such as backyard observers documenting US spy plane flights and reporting them to the government. The Roswell crash, which a military officer first identified as a flying saucer before the Army clarified a day later that it was a weather balloon, wasn’t precisely a weather balloon. The object was indeed a balloon, but it carried acoustic sensors designed to listen for Soviet nuclear tests. In other words, letting the public think an object is mysterious or unexplained is a good way of disguising something that’s explainable but should be secret.

[Related: UFO conspiracies can be more dangerous than you think]

In the decades following the conclusion of Project Blue Book, the military tried to debunk sightings, rather than catalog them. Today, the work of the All-Domain Anomaly Resolution Office is to take the sightings seriously, and to encourage reporting, in case there are in fact important aircraft sightings that would otherwise be shrugged off. The advent of drones, stealth technologies, uncrewed sea vehicles, and advanced ways for someone to interfere with sensors all make it possible, if not always plausible, that a given UAP sighting could be a deliberate act by a hostile group or nation.

Still, as the report already attests, most sightings can be dismissed and known phenomena. Balloons, decades after Roswell, still catch light in unusual ways, and can look surreal on the ground.

One takeaway from the report hints that some of the phenomena could be due to people or sensors being mistaken or not working properly. “ODNI [Office of the Director of National Intelligence] and AARO [All-Domain Anomaly Resolution Office] operate under the assumption that UAP reports are derived from the observer’s accurate recollection of the event and/or sensors that generally operate correctly and capture enough real data to allow initial assessments,” notes the report. “However, ODNI and AARO acknowledge that a select number of UAP incidents may be attributable to sensor irregularities or variances, such as operator or equipment error.”