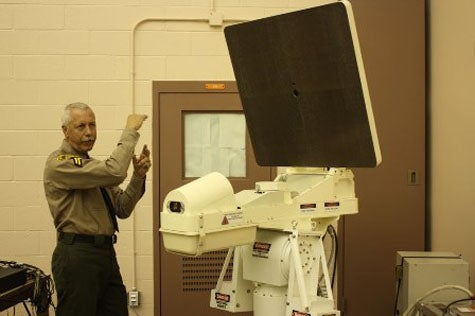 Inmates bringing the ruckus at Pitchess Detention Center in California will find that deputies there can bring the pain. Working as the test-bed for a National Institute of Justice experiment, the prison is testing Raytheon’s Assault Intervention Device, a seven-and-a-half-foot-tall device that focuses an invisible energy ray on misbehaving inmates, causing a serious heating sensation that should bring said bad behavior to a halt.

The device, which will be mounted high on the wall in a dormitory housing some 65 prisoners, does no damage but it’s ray penetrates the skin about 1/64th of an inch over an area about the size of a CD, causing a sensation that’s been equated to opening an extremely hot oven. The pain stops when the target gets out of the way of the beam. It is controlled remotely via a joystick and a camera mounted on the ray itself. Deputies at Pitchess think it should help break up fights between inmates and keep deputies from having to hurl themselves into harm’s way when inmates get unruly.

Of course, we’ve seen similar technology before in military settings. The U.S. Army deployed a similar Humvee-mounted pain ray cannon to Afghanistan, though it was recalled to the States without ever having been used (or so we’re told). Apparently incapacitating locals with a searing sensation of extreme heat was deemed an inappropriate way to win hearts and minds.

At Pritchess, where there have already been 257 inmate-on-inmate assaults and 19 assaults on deputies over the fist half of this year, deputies are likely less worried about being liked and more concerned about maintaining safety and order. If the pain ray is successful at helping them do so, it could be installed in prisons nationwide.