DARPA has been trying to crawl inside the minds of soldiers for a while now, but a new ultrasound technology... 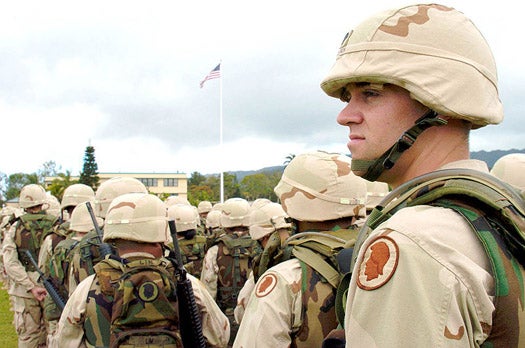 DARPA has been trying to crawl inside the minds of soldiers for a while now, but a new ultrasound technology could let them get deeper inside than ever. Working under a DARPA grant, a researcher at Arizona State is developing transcranial pulsed ultrasound technology that could be implanted in troops’ battle helmets, allowing soldiers to manipulate brain functions to boost alertness, relieve stress, or even reduce the effects of traumatic brain injury.

Manipulating the brain to enhance warfighting capabilities and maintain mental acuity on the battlefield has long been a topic of interest for DARPA and various military research labs, but the technology to do so remains limited. Deep brain stimulation (DBS), for instance, requires surgically implanted electrodes to stimulate neural tissues, while less-invasive methods like transcranial magnetic stimulation (TMS) possess limited reach and low spatial resolution.

But Dr. William J. Tyler, an assistant professor of life sciences at ASU, writes on the DoD’s “Armed With Science” blog: “To overcome the above limitations, my laboratory has engineered a novel technology which implements transcranial pulsed ultrasound to remotely and directly stimulate brain circuits without requiring surgery. Further, we have shown this ultrasonic neuromodulation approach confers a spatial resolution approximately five times greater than TMS and can exert its effects upon subcortical brain circuits deep within the brain.”

Tyler’s technology, packaged in a warfighter’s helmet, would allow soldiers to flip a switch to stimulate different regions of their brains, helping them relieve battle stress when it’s time to get some rest, or to boost alertness during long periods without sleep. Grunts could even relieve pain from injuries or wounds without resorting to pharmaceutical drugs. More importantly, in the periods after brain trauma ultrasound technology could reduce swelling and metabolic damage that is often the root cause of lasting brain damage.

[Armed With Science via Danger Room]