An artificial kidney powered by the circulatory system could be the first implantable device to replace kidney donation and dialysis,... 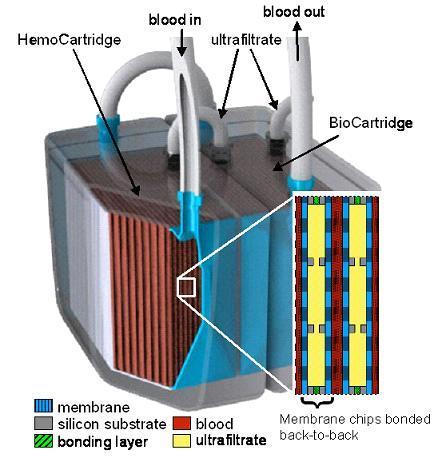 An artificial kidney powered by the circulatory system could be the first implantable device to replace kidney donation and dialysis, scientists say.

Led by a University of California-San Francisco scientist, a consortium of about 10 different research teams unveiled a new artificial kidney prototype this week, saying a room-sized version has already shown promise for the sickest patients. Fabrication processes used to make silicon chips could conceivably be used to make coffee-cup-sized devices, which could take thousands of people off dialysis machines or kidney-donor waiting lists.

The multi-institutional team, led by UCSF professor Shuvo Roy, formerly of the Cleveland Clinic, is the first to demonstrate technology that could be feasibly downsized into a transplant device.

It’s a two-stage system involving thousands of nanoscale filters placed in a “BioCartridge,” which would remove toxins from the blood. A “HemoCartridge” bioreactor made of engineered renal tubule cells would mimic the metabolic and water-balancing roles of a real kidney. The system uses a patient’s blood pressure to perform filtration without the use of pumps, according to a UCSF news release.

Currently, transplants and dialysis are the only ways to treat kidney failure. An implantable device would obviously be preferable, but so far, scientists have not been able to come up with a system that mimics everything the kidney can do.

The new system relies on the latest advances in nanotechnology and tissue generation, Roy said. He hopes to use silicon-fabrication technology to make the device small enough for transplant.

“This could dramatically reduce the burden of renal failure for millions of people worldwide, while also reducing one of the largest costs in U.S. healthcare,” he said.