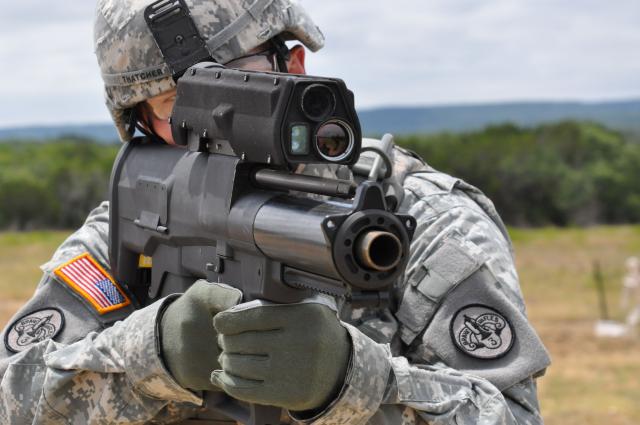 It's hard to get out of this weapon's way. PEO Soldier
SHARE

U.S. Army Special Forces soldiers will deploy with the XM-25 weapon this summer, so that they can shower enemies hidden inside buildings with lethal smart rounds. Veterans of the Afghanistan conflict who tried the weapon predicted it would be a “game changing” gun capable of taking out insurgents hidden behind cover, Military.com reports.

The XM-25 resembles a highly sophisticated grenade launcher that fires laser-guided smart rounds. The laser gauges a distance to target and allows the warfighter to set where the round will detonate, adding or subtracting increments of 3 meters from the laser-spotted point. Then the scope tells a microchip inside the round how far it should travel before exploding.

Each Heckler & Koch-made 25mm round actually holds two warheads that pack more punch than the current 40mm grenade launchers. Warfighters would basically have immediate, long-distance explosive firepower in rifle form, as opposed to having to wait on mortar strikes, artillery or airstrikes.

All that high-tech gadgetry earned the XM-25 one of PopSci’s Best of What’s New awards for 2009, but it doesn’t come cheap, at $25,000 per weapon. Still, that may prove more cost-effective for rooting out embedded enemies compared to relying upon expensive Hellfire missiles fired from Apache attack helicopters.

Army plans call for full production start in 2012 and an initial buy of 12,500 XM-25s. Until then, warfighters might get dumbed-down sense of such a weapon’s effectiveness by playing with the detonate-upon-command grenade launcher in Halo: Reach.