A sniper crouches near an open window and zooms in on his target, who sits a half-mile away. He peers... 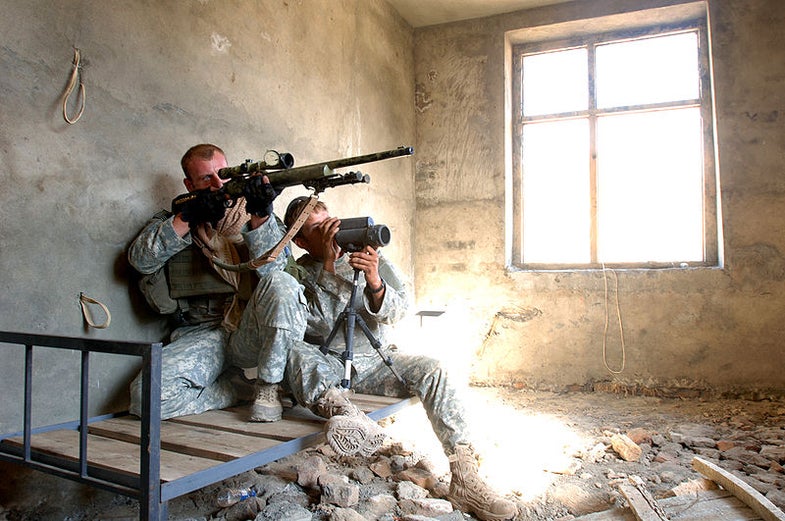 A sniper crouches near an open window and zooms in on his target, who sits a half-mile away. He peers through a scope and holds his breath, preparing to squeeze the trigger. But it’s windy outside, and he can’t afford a miss. What to do?

A new DARPA-funded electro-optical system will calculate the ballistics for him, telling him where to aim and ensuring a perfect shot, no matter the weather conditions.

Lockheed Martin won a $6.9 million contract this week for the second phase of DARPA’s One-Shot system, which will provide direct observations of a target, measure every variable that influences a bullet’s flight, and calculate the aim offset in a sniper’s rifle scope.

During the project’s first phase, which started in 2007, Lockheed developed a down-range system that measured average crosswind; range to target; spotter scope position; air temperature, pressure, and humidity; and more, according to Military Aerospace. Using all those variables, it calculated the ballistics for a .308 bullet at ranges as far as 3,600 feet.

While that’s impressive, the system was too heavy and unwieldy, and it couldn’t be used with standard rifle scopes. The phase two design will be more compact and able to operate in real time and over longer distances.

It will measure atmospheric conditions, account for the weapon’s maximum effective range and include GPS coordinates. It’s also supposed to communicate with the rifle scope, informing the gun itself of the aim point offset and expected crosswind.

Lockheed is supposed to deliver 15 field-testable prototypes by next October.