Giving Traffic Lights a Mind of Their Own Can Reduce Congestion 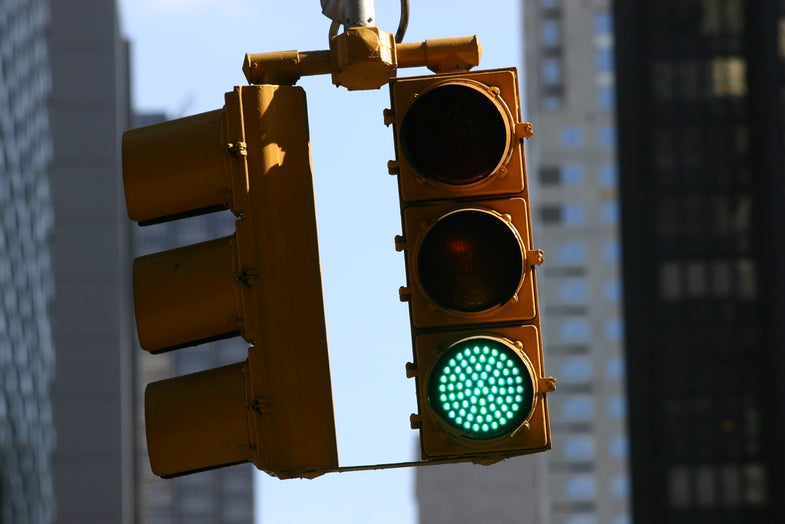 A system of self-organizing traffic lights could reduce congestion, according to European researchers. The key is allowing lights to switch from green to red in a decentralized, chaotic way, instead of following a regular programmed pattern.

Though you might curse them at every red light, city planners do try to synchronize traffic signals to improve flow, even relying on supercomputers to design the optimal patterns. Lights stay green longer during peak traffic hours, and computer models help prioritize public transit. But variables like pedestrians in crosswalks, large crowds and vehicle wrecks can throw a carefully designed system out of whack, leading to annoying and pollution-causing traffic jams.

Stefan Lämmer, a professor at Dresden University of Technology in Germany, and Dirk Helbing, a professor in Zurich, Switzerland, who works with the Santa Fe Institute in New Mexico, say a self-organizing system would work better.

They started by modeling traffic as if it were a fluid, comparing intersections to a network of pipes. Then they gave each traffic signal a sensor that provides information about traffic at a given moment. Computer chips in the lights calculate the expected flow of vehicles, and determine how long the lights should stay green.

But this “jungle principle” of every light for itself does not result in harmony, the researchers said. If each traffic light responds to its immediate demands, then all the lights will just react to the traffic coming from nearby intersections, which defeats the purpose of a smart network.

The solution is a decentralized approach that lets the traffic lights work together by figuring out how changes at each individual intersection would affect the entire system. Instead of being stymied by natural fluctuations in traffic, the system takes advantage of them, using random gaps to help improve traffic flow. Traffic lights could request green time only when there is a definite demand for them, the researchers write. This acyclic approach could eliminate the particularly annoying problem of sitting at a red light while there’s no traffic.

Lämmer and Helbing tested tested their algorithms in a computer-simulated version of the city center of Dresden, and found delay times could be reduced from 10 to 30 percent. Their paper doesn’t mention road rage, but if the system works, it’s safe to assume reductions there, too.