A Variable Velocity Rifle That Puts the ‘Less’ in ‘Less-Lethal’

New from the designers of the “Tickle Me Elmo” doll: a variable velocity less-lethal rifle. The Lund Variable Velocity Weapons... 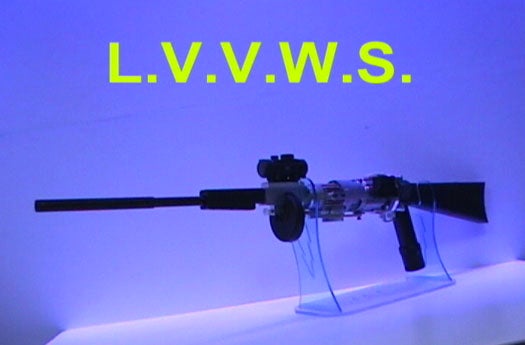 New from the designers of the “Tickle Me Elmo” doll: a variable velocity less-lethal rifle. The Lund Variable Velocity Weapons System is a gas combustion rifle that chambers both lethal and less-lethal rounds, automatically adjusting the muzzle velocity downward if a target is too close so as not to accidentally turn a “less-lethal” situation into a highly undesirable one.

Lund Technologies – designers of the fuzzy red Sesame Street doll that incited parents to riot a few years back – are pitching the LVVWS as an all-in-one weapon for law enforcement or military operating in situations where the circumstances, and the level of necessary force, can change on a dime.

“Less-lethal,” of course, is a term that replaced “non-lethal” because it turns out most rounds being billed as non-lethal – like rubber bullets for instance – are actually quite fatal at close range. Too keep less-lethal intentions from turning into lethal actions, the LVVWS is equipped with a range finder that locates the target and calculates distance; if the shooter is working in less-lethal mode, the rifle ratchets down the muzzle velocity of the round, maintaining its less-lethal status even in close quarters.

The concept of swapping between lethal and non-lethal force in urban environments where civilians may be present is attractive to a Pentagon that loses a PR battle each time a civilian in Iraq or Afghanistan gets caught in the crossfire. But in reality, a weapon like the LVVWS is likely a long way away from being service ready.

For one, gunpowder is a time-tested portable, combustible that, if kept dry, has reliably served infantrymen for centuries; we’re not so sure the same can be said for compressed gas cartridges. But more importantly, while range is usually a big factor when less-lethal rounds turn deadly, it’s certainly not the only one. The mass of the target, the placement of the shot and the physical condition of the target invite more variables into the equation that the LVVWS can’t address. Not to mention, as Danger Room points out, a weapon that easily switches between less-lethal and “kill-you-dead” invites the kinds of mistakes that can be irreversible.

You can see the LVVWS in action here.