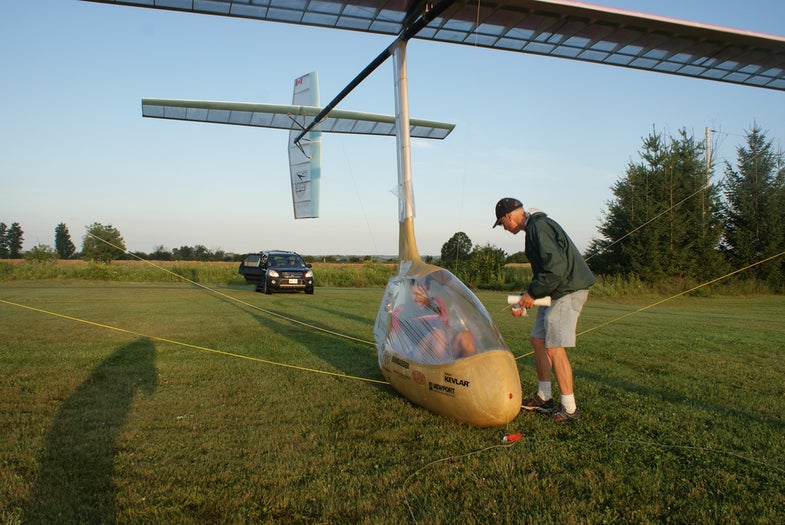 The Snowbird weighs just 94 pounds but has a wingspan that nearly matches a Boeing 737. University of Toronto
SHARE

A Canadian engineering student achieved sustained flight in a human-powered ornithopter for the first time in August, and has just filed a claim for a world record, according to the University of Toronto.

The Snowbird is the first contraption of its kind to allow humans to fly like birds, by flapping massive wings to create lift.

The record stands on the likely-enormous shoulders of Todd Reichert, an engineering PhD candidate at the University of Toronto Institute for Aerospace Studies, who designed and piloted the craft. An SUV towed him to takeoff, and then his wing-flapping device sustained altitude for 19.3 seconds and carried him 475 feet, with an average speed of 16 miles per hour. It’s a stunning sight: (Wings start flapping about 1:40 in)

Reichert, 28, lost 18 pounds over the summer in his quest to fly the Snowbird, which has a 105-foot wingspan (just six feet shorter than a Boeing 737) and weighs just 94 pounds. It is made of carbon fiber and balsa wood.

He actually flew the craft by pedaling with his legs, the Toronto Star reports. Pulleys and ropes attached to the wings would pull down when he pedaled forward, and the wing spar would bring them back up. The aircraft even sang as the wind blew past the airfoil and support lines, according to the Star. It was the Aeolian tone, a musical tone generated by wind blowing over an object.

Reichert noted that people have been trying to fly like birds throughout history: “This represents one of the last of the aviation firsts,” he said.

He also told the Star that he didn’t sleep the night before the event.

Reichert performed the record-breaking flight Aug. 2 at the Great Lakes Gliding Club in Tottenham, Ont. On hand was the vice president of the Fédération Aéronautique Internationale (FAI), the body that governs worldwide aeronautical sports and world records. The official record claim was filed this month, and the FAI is expected to confirm it in October, according to a University of Toronto news release.