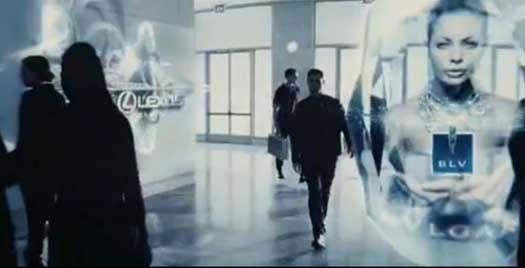 Japanese company NEC wowed technophiles and horrified privacy advocates earlier this year with electronic billboards that use facial recognition technology to identify the age and gender of passers-by, tailoring the ads they display to fit the demographic. Now IBM researchers in the UK are taking that notion even further, taking advantage of new technologies to delve deeper into the personal data of people on the street, tailoring advertisements that can even call the subject by name.

The billboards they are developing rely on the RFID chips that are increasingly being built into credit cards and cell phones as a means of storing data that is accessible by contact-free sensors (like the “touch pay” feature on some credit and debit cards that doesn’t require the user to swipe). A sensor on the billboard picks up on that RFID signal as the cardholder passes by, tapping information like name, age, gender, shopping habits, and personal preferences.

From there, the billboard could display an ad that is customized particularly for that person, ostensibly even calling his or her attention to it by name. It’s all very Minority Report (remember when Tom Cruise passes that billboard that shouts, “John Anderton. You could use a Guinness right about now”?), but it will likely draw the ire of privacy groups who will view it as an unsolicited extraction of personal data.

Because it is. But IBM and advertising groups view it as a way to make advertising more relevant to the user, thus making consumers’ lives easier and more efficient as they would no longer be bombarded by advertising that doesn’t apply to them.