The brain is a difficult place to wander around without a map. But while the human brain, with its billions... 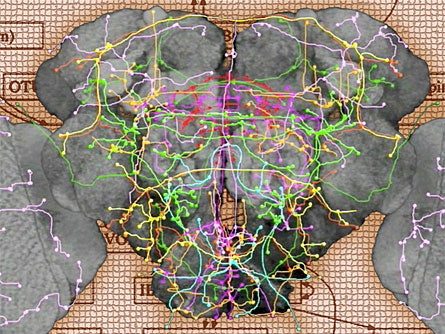 The brain is a difficult place to wander around without a map. But while the human brain, with its billions of neurons, is far too vast a frontier for us to map using current means, researchers have been building a cell-by-cell detailed map of the neural pathways in the brains of fruit flies, shedding light on how the neurons in our own brains connect and function.

The computer-based method of mind mapping relies upon the brains of flies that were modified to make certain neurons glow in the presence of laser light. Using a laser, an imaging system and computer mapping software, the team is laying image over image to create a detail of how different neuron populations behave and interact. The results thus far have already been surprising, and the map isn’t even close to completion yet.

From one fly’s brain to the next, the neural pathways are more or less consistent. But the neurons themselves can differ significantly, taking radically different shapes and suggesting that neurons we thought were identical could perform very different tasks. It will take a few years to complete an entire map of the fruit fly brain (if that is indeed possible), but in the meantime the team hopes to learn a lot more about the way neurons interact with one another with each image that is added.

Understanding the way neurons interact — not just as individuals but as populations — could potentially lead to breakthroughs in mental health research and treatment. At the very least, it could inform a more ambitious undertaking in the future: a complete master floor plan for the entire human brain.