Like many pieces of modern medical equipment, X-ray machines are as bulky and energy dependent as they are vital. Even... 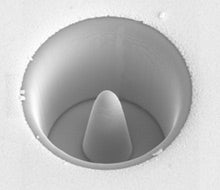 When heated, this point emits X-ray radiation. A battery of them can replace a standard X-ray machine. via Technology Review
SHARE

Like many pieces of modern medical equipment, X-ray machines are as bulky and energy dependent as they are vital. Even “portable” X-ray machines remain too heavy to carry across rough terrain, and too energy hungry to run off batteries. That’s why Radius Health’s portable, low energy X-ray machine may revolutionize medicine in disaster zones, on the front lines, and at patients homes. By using pyroelectric crystals as an X-ray source, Radius Health has created a machine small enough to fit in a suitcase, light enough to deploy anywhere, and energy efficient enough to run on a laptop battery.

When heated, this point emits X-ray radiation. A battery of them can replace a standard X-ray machine.

The secret to Radius Health’s device is the pyroelectric crystals. Borrowed from semiconductor technology, the crystals emit electromagnetic radiation when heated. In this case, the crystal points are specially designed to emit EM radiation in the X-ray spectrum. This is a significant change from the X-ray emitting cathode ray tube used in all current X-ray machines. The points are chemically etched out of a single tile of crystal, allowing the emitting surface to fit on a flat panel.

Additionally, by using an array of crystal points, instead of the single, large X-ray source used in conventional machines, the Radius Health device can produce a usable image with a far lower dose of radiation. Not only does the lower dose mean less energy use, but it also makes the machine suitable for use on small children.

Radius Health expects to complete their first X-ray scanner in a couple of months, with a full-on prototype following by the end of the year. That should give aid workers working in disaster zones, medics on the battlefield, and the increasing number of doctors that make house calls just enough time to get the larger doctor bags needed to carry this time, money, and life saving innovation.