Toxoplasmosis, a common food- and pet-borne illness linked to hallucinations, personality alteration, and, since it’s often carried by house pets,... 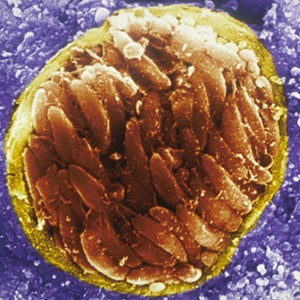 Toxoplasmosis, a common food- and pet-borne illness linked to hallucinations, personality alteration, and, since it’s often carried by house pets, the stereotype of the crazy cat lady, infects around 15 percent of the US population. Luckily, a new technique that traps the parasite with gold nanoparticles, and then zaps them with lasers, should help ease the $7.7 billion the disease costs America every year.

The treatment, developed at the University of Technology Sydney, Australia, uses gold nanoparticles that attach to toxoplasmid-hunting antibodies. The gold carrying-antibodies then spread through the circulatory system, affixing themselves to parasites in the blood.

Once the gold particles are well distributed and widely attached to the parasite, the laser heats up the gold, incinerating the parasites. According to the researchers, the laser could be tuned to the so-called “tissue window”, a wavelength of light to which the human body appears transparent. That way, the laser can pass harmlessly through the skin, burning up the parasites along the way.

The researchers don’t want to just stop at toxoplasmosis, either. If this technique works on one parasite, than malaria, another blood-infecting parasite, should also be susceptible to the same laser annihilation.