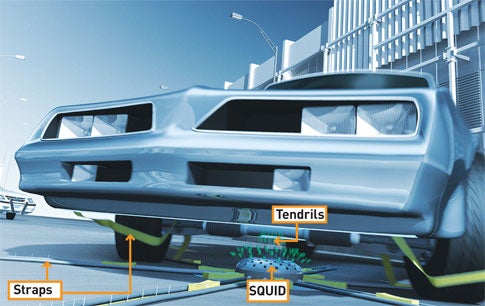 With cop cars disappearing from his rearview mirror and an open road ahead, a fugitive thinks he’s in the clear—until his car comes to a sudden halt. A sheriff, hiding in the bushes, has activated a road trap that sprung a ball of straps into the car’s undercarriage, immobilizing its drive shaft and axles. 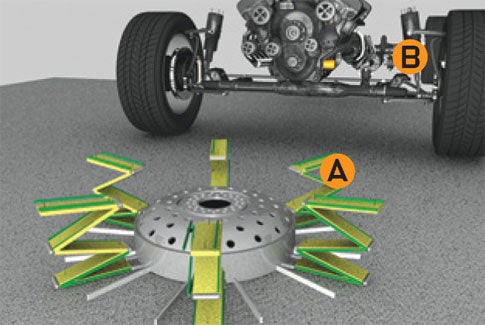 As the vehicle approaches SQUID, an officer remotely triggers an explosion to unfurl the straps across the road. Small barbs on the straps [A] grab the wheels. Rotation of the wheels wraps the straps around the car’s suspension and axles [B] 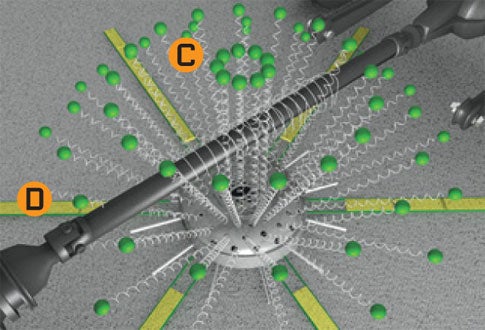 Infrared sensors in SQUID detect when the car is directly above it and automatically deploy fishing-line-like tendrils, weighted at their ends with rubber balls [C]. The car’s rotating components pull the tendrils into a tangle around the drive shaft [D] 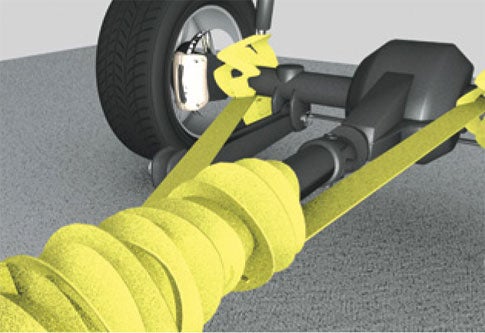 The tendrils tighten the attached fabric straps around the drive shaft and axles, locking them in place to bring the car to an immediate stop

Putting an End to the Chase

With funding from the Department of Homeland Security, engineers at the Engineering Science Analysis Corporation in Arizona are almost ready to end dangerous car chases in just this way. Their prototype manhole-size trap, called SQUID (for Safe Quick Undercarriage Immobilization Device), can bring a pickup from 35 mph to a standstill. With the trap engaged, the driver can’t accelerate, limiting the risk of injuring perps or bystanders as the car comes to a stop.

The device is constructed from mostly off-the-shelf materials. The straps, which are made from a fabric that secures crates on trailer trucks, are unfurled by the mechanism that inflates car airbags. By next year, the team plans to make SQUID strong enough to stop a 120mph, 5,000-pound truck. The device is now an obvious white disk, but because it spans a traffic lane, it’s hard to avoid. The final version will blend into the street, explains the company’s president, Martin Martinez, “but we don’t want to tell bad guys what it’s going to look like.”

Disguised as perhaps a speed bump or manhole cover, SQUID could give officers a safe alternative to tire-spike strips and concrete barriers, which take too long to set up and often cause cars to crash into innocent people. Last year, Luis Aguilar, an Arizona-Mexico border-patrol agent, was laying down spikes to burst the tires of a Hummer suspected of smuggling drugs. Before Aguilar could finish, the driver of the Hummer rammed into and killed him. “We want to make sure that doesn’t happen again,” Martinez says. With that in mind, his team will have a smaller, one-armed version of the device ready by this summer.