Reports surface that GM uses human cadavers as crash dummies--but is that anything new? 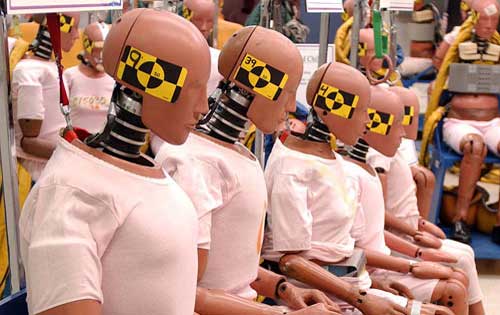 Does GM use human bodies as crash test dummies? That’s not the plot of a 1970s cult classic; it’s the claim of one car-safety specialist in Sweden, who told newspaper Expressen that GM recently wrapped up a multiyear research study using human cadavers in car-crash simulations. The man says Saab cars were involved in the project, which reportedly involved people who had donated their own bodies–assumedly in the name of scientific research–not political dissidents. Well, that’s a relief.

Whether GM did or not use cadavers in this case, the history of expired humans in crash testing spans at least a half-century. Prior to the 1950s, carmakers assumed no serious accident could be made survivable, and thus didn’t bother to build components to any real safety spec. Such thinking started to shift during the late 1950s. That’s when Detroit’s Wayne State University initiated a program to determine a body’s tolerance for smashes. To do it, researchers raided the medical school to find suitable subjects.

In one early study, embalmed corpses were flung down an elevator shaft to test noggin strength. The experiment led researchers to conclude the human head can take a surprising amount of force–about a ton and a half for a fraction of a second without injury, according to a documentary segment of the BBC science TV show Horizon that aired in 1998. The Detroit program made considerable headway (um, sorry) in the then-emerging field of auto-safety study. Wayne State researcher Albert King wrote in 1995 in the Journal of Trauma that cadaver research wound up saving 8,500 lives annually. For every cadaver used, he wrote, 61 people survive via seat belts, 147 by air bags and 68 by safety windshields.

These days, safety researchers mainly use highly refined dummies in repeatable standardized tests that log far more data than a corpse tumbling down an air shaft ever could. And if it were my guess, GM’s involvement in a recent cadaver study would likely have focused on making the current crop of dummies (the inanimate kind) even more lifelike, with such work likely done through a research intermediary. Either way, those who survive serious crashes continue to owe a debt of gratitude to the deceased.

Via The Local (SE)

EDITOR’S NOTE (5/14/08): Saab responded this week to the cadaver claims, saying neither they nor GM have ever used “postmortem human test subjects” for safety research.