Just a few blocks away from CES, at the AVN Adult Entertainment Expo, innovation took a different form as the... 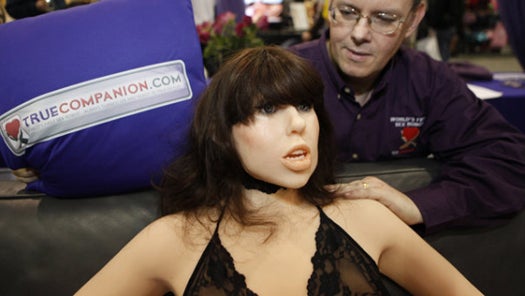 Standing five feet seven inches and weighing 120 pounds, Roxxxy ain’t your grandma’s inflatable girlfriend. Five different personalities, ranging from Frigid Farrah to Wild Wendy (all the way up to S & M Susan, if you’re into that sort of thing), are programmed into Roxxxy’s AI. Based on the personality the user chooses for her, the ‘bot will responds to touch and speech in different ways.

But unlike her real-life counterparts, this girlfriend really listens. Users can go online and detail their particular likes and dislikes, downloading them to their Roxxxy robots (naturally, this 21st century girl is Wi-Fi-enabled; she’ll even send you lusty love letters via email). Using Roxxxy’s Web site, gentlemen can refine their ladies’ tastes and preferences to match their own, slowly creating their idea of the perfect woman. Friends can even swap their girlfriends’ personalities online in a somewhat creepy incarnation of social networking.

Of course, since a real companion can’t be all brains and no brawn, a flesh-like synthetic skin covers Roxxxy’s anatomically correct, articulated skeleton, which also boasts robotic movement at her — ahem — three inputs. A liquid cooling system facilitates robotic function, powered by nothing less than a mechanical heart. The only outward manifestations of her robot-ness are a few cables running out of her back that link with a laptop.

Oddly enough, the inspiration for Roxxxy stems from the September 11 attacks, during which artificial intelligence engineer and Roxxxy inventor Douglas Hines lost a close friend. An attempt to preserve that friend’s personality forever laid the groundwork for what later became Roxxxy’s AI. Costs for the robots range from $7,000 to $9,000 depending on features, as everything from hair and skin color to bra cup size is customizable. As for the ladies out there wishing to create the perfect male, remember, patience is a virtue; a male version dubbed Rocky is already in the works.