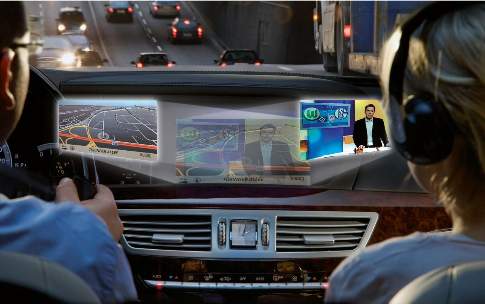 Picture this: You’re motoring down the highway, following route guidance on the navigation screen, when the guy in the passenger seat decides he wants to watch Raising Arizona on DVD. Mercedes-Benz and Bosch jointly devised a novel gizmo can satisfy both viewing requests, without a sword and the smarts of Solomon. It’s a dual-view LCD monitor system called, elegantly enough, Splitview.

Splitview is a dashboard-mounted display screen that allows driver and passenger to view two different images simultaneously. Here’s how it works: The eight-inch active matrix, backlit color monitor nests a second image feed on adjacent pixels. A masking filter divides the combined image such that, depending on seating position, only one set of the pixels can be seen.

With Splitview, the driver has access to information from Mercedes’s control and display system, called COMAND, on the display, while the front passenger can use a remote control to watch DVDs, TV channels or music videos, though the car’s speakers or via headphones. Mercedes-Benz says it will introduce Splitview in the company’s flagship S-Class sedan in mid 2009.