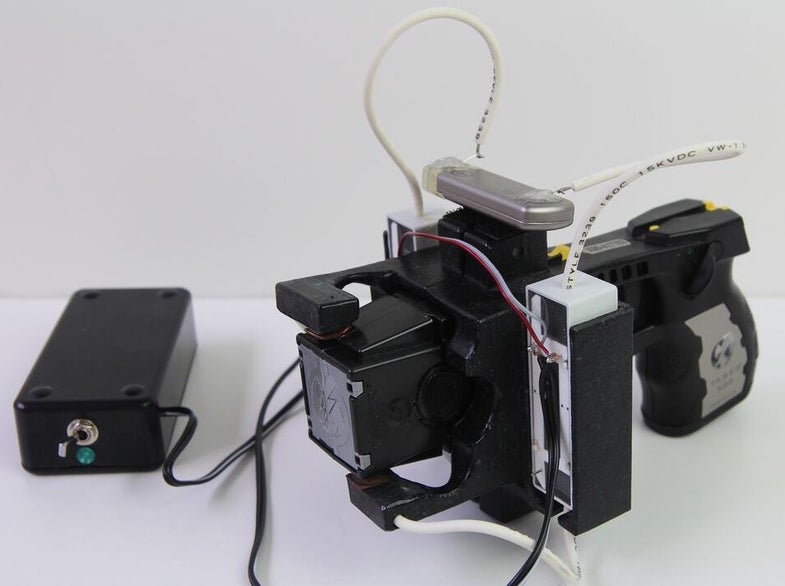 Tasers are quickly becoming one of the most ubiquitous and indispensable law enforcement tools in the country. And yet the “nonlethal” device—which is used by over 16,000 police agencies across the United States—causes a significant number of deaths every year. The Washington Post reported that in 2015, approximately a person a week died in-custody after being Tasered by police.

The majority of serious injuries from Tasers (the brand name for conducted electrical weapons) are due to falls resulting from the temporary muscle paralysis that often prevents suspects from bracing themselves. But evidence shows that tasers can also cause cardiac arrest. Now, a group of researchers think that they can make Tasers heart safe by creating a device that combines a Taser and EKG machine into one, to alert officers quickly if the suspect is in cardiac distress.

In 2009, Dr. William Bozeman, a professor of emergency medicine at Wake Forest Baptist Medical Center, and his colleagues conducted one of the most thorough studies of Taser safety to date. They concluded that 99.75 percent of the time, Tasered suspects incurred either minor or no injuries.

“That’s a stunningly safe tool, especially given how effective it is,” Bozeman tells Popular Science. “Compared to the other tools officers have—their gun, pepper spray, baton, or hand-to-hand physical force—the taser appears to be the safest of those,” he says. “But nothing’s 100 percent. And these unexpected in-custody deaths keep occurring.”

In a small number of cases—they estimate 1 in 2.5 million—the heart may be affected. And some of those incidents may prove fatal.

Though nobody knows exactly how many people die from Tasers per year, Bozeman and his colleagues set out to make the relatively safe device safer. Recognizing that the basic setup of a Taser is similar to an electrocardiograph (EKG) machine (two probes connected by insulated wires to an electronic device), Bozeman along with his colleague, Dr. Jason Stopyra, realized they might be able to combine the two devices.

“We were hoping to increase the safety of suspects,” Bozeman says. “If we could introduce something that could give us an indication that there was a problem medically, we could help them faster, and perhaps save their lives.”

With funding from the National Institute of Justice, they got to work building a prototype biomonitoring Taser. What they came up with was quite simple: They took standard issue Taser and wired it to an inexpensive, off-the-shelf EKG device.

Next they had to test it, but finding volunteers willing to be Tasered isn’t so easy. So they approached the Mount Airy Police Department in North Carolina, and the agency agreed to allow the researchers to test the device on the department’s officer trainees (getting Tasered is a typical part of training for many officers).

“The device worked beautifully,” Bozeman says. “It was able to deliver its intended charge to incapacitate the subject and we were able to read the subject’s EKG.”

Though their device was just a proof-of-concept, Bozeman and Stopyra hope that the results, published in the Journal of Forensic and Legal Medicine, will encourage Taser manufacturers to partner with medical device companies to create similar devices. They envision biomonitoring Tasers that could begin recording cardiac information automatically and emit audible and visible alarms if a suspect is in cardiac distress.

A future version of the device could also record cardiac data and send it via Bluetooth to a computer or smartphone, a feature that Bozeman believes would help suspects and officers alike.

“In the rare but tragic event of unexpected in-custody death, officers are often accused of misconduct. And that’s an understandable concern,” Bozeman says. But there are always other possible explanations, he says. He offers the example of a suspect with a cardiac dysrhythmia due to drug use. The recorded cardiac information could be analyzed later, giving medical professionals valuable health data about the suspect and potentially protecting the officer from allegations.

“There are several hundred [in-custody deaths] every year in the United States.” Bozeman says. “If we can introduce biomonitoring without interfering with the difficult job that the police do, if we can intervene in these medically fragile patients, then perhaps we can save lives.”