Army Prepares To Cut The Mustard

...agent from its chemical weapon stockpile 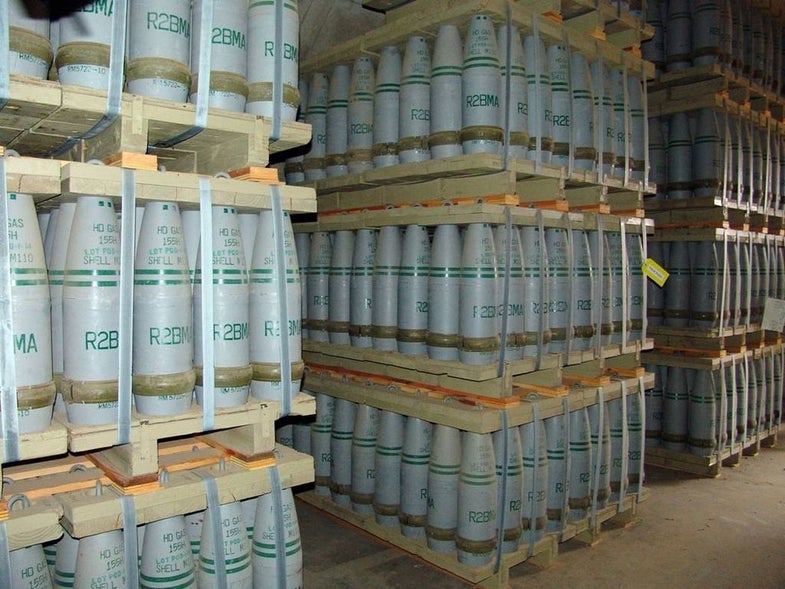 Weapons aren’t designed for disassembly. Mustard agent, commonly referred to as mustard gas, is a deadly chemical weapon that has a similar smell to the condiment. Used widely during World War I, the liquid agent is dispersed in the air like a mist, where it then blisters any flesh it encounters. This is grotesque and painful on exposed skin, and especially fatal when it gets inside lungs. It’s a particularly gross, awful weapon, and one with the added downside of flying back at the people who unleashed it if the wind shifts.

While the United States maintained a stockpile of the agent for a long time. Getting rid of it is a similarly long process. The U.S. Army destroyed some of its stockpile at Johnson Atoll in the 1990s, and in other efforts since. This weekend, the Army is set to start destroying a huge amount of the stockpile in a process involving robots at a new, automated plant.

From the Associated Press:

After World War I, chemical weapons like mustard agents were rarely used. The Geneva Protocol, debated in the 1920s and adopted towards the end of the decade, prohibited the use of gases in war, though it failed to address the production or stockpiling of chemical weapons. Italy, under the fascist dictator Mussolini, used chemical weapons against Ethiopia, Japan used them against China during World War II, and the United States and Soviet Union maintained stockpiles they did not use during the war. (While the use of gas was debated, a different weapon of mass destruction instead ushered in the end of the war.)

Only a few countries used chemical weapons at all after World War II: Egypt, against Yemen in the 1960s, and Iraq’s dictator Saddam Hussein, in the 1980s. A later treaty, the Chemical Weapons Convention, was signed in the 1990s, and it prohibited not just the use but the production and stockpiling of chemical weapons as well.

For the most part it’s worked, but Syria, under the dictatorship of Bashar al-Assad, used chemical weapons in the ongoing civil war. While many of them were turned over and destroyed in 2013, continued chemical attacks since then show the destruction wasn’t complete.

The history of chemical weapons is an especially bleak one, in the generally bleak history of war. Destroying the weapons is one way to close that chapter on history, or at least leave it with fewer authors. In 2013, Popular Science spoke with Al Mauroni, who wrote the book on Chemical Demilitarization about what it takes to destroy chemical weapons. The Pueblo plant, not yet operational at the time of the interview, is one of the major parts of safely neutralizing the mustard weapons, and Mauroni explained the science of neutralization in depth.

With luck, America’s chemical weapons stockpile will be gone by the end of the 2020s, a full century after the first treaty prohibiting their use in war.

This post has been updated to more accurately describe the mustard agent, its effects on the human body, and the span of the weapon demolition process.