If you're already using Apple's smart home platform, these bulbs are a breeze. 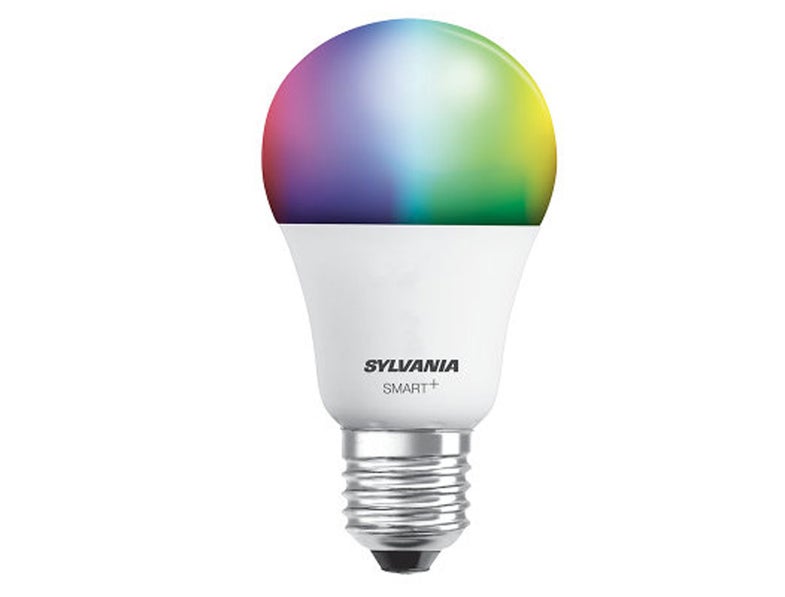 These bulbs don’t require a standalone hub and are slightly less expensive than similar smart lights from Hue and Lifx.

Unlike some other smart lights, installing Sylvania’s LED bulbs is as easy as, well, screwing in a lightbulb. Thanks to their baked-in HomeKit compatibility, you can control them using a secure Bluetooth connection instead of relying on a hub that piggybacks on your wireless home network.

Once you’ve screwed them in and powered them on, you simply go into Apple’s Home app, select the “+” sign in the upper right-hand corner and add each bulb. You can either scan the eight-digit HomeKit code on the light itself or manually input it if it’s in a difficult to reach position. All that’s left is to fine-tune your lighting preferences.

We tested three of Sylvania’s Smart+ bulbs over the course of a week, adding two of them to an overhead entryway light fixture and a third to an office lamp. As with all HomeKit devices we test, we also created new scenes in Apple’s Home app, issued plenty of Siri voice commands, and set up a variety of schedules and automation to see how well the bulbs performed.

Sylvania isn’t new to the smart home lighting game, but this is company’s first HomeKit compatible bulb. That means, in addition to a smart bulb, you’re also getting all of the good and bad things associated with the platform—things like a quick hub-free setup, the ability to control your lights and everything else on one centralized app, and, in general, a smart home system designed with much more attention toward security and privacy.

Of course, you’re also subject to HomeKit’s less appealing aspects, which include a lack of support for other smart home platforms and the fact that you’ll need to buy or own a 4th generation Apple TV (which serves as a hub) to control your devices while you’re away from home. But if you’re considering these bulbs at all, you’re probably more than familiar with this list already, so let’s get to the lights themselves.

We were happy to see that these traditionally-shaped LED bulbs fit just about anywhere a standard incandescent did, which isn’t always true of some oddly shaped smart bulbs. The lights themselves have a maximum brightness of 800 lumens and a 25,000-hour lifespan, which is comparable to most smart light bulbs these days. The only thing brighter that we’ve used are Lifx’s A19 bulbs, which go all the way up to 1100 lumens.

Like every other multi-colored bulb out there, Sylvania’s let you tune the specific colors to your liking and adjust white temperature as well. All this is done through Apple’s Home app. At the time of writing, Sylvania hadn’t released its promised standalone app in the iOS app store, but as mentioned above one of the main appeals here is the fact that you don’t need to bother with it. For us, consolidating the controls for all the smart devices in your home into one dedicated app is one of the main allures of a HomeKit.

While the bulbs mostly worked as expected while issuing Siri voice and app commands, there were a few instances when they became unresponsive for short periods of time. This happened both while we were at home (standing two feet from to the bulbs) and during a visit to a friend’s place, and we never were able to figure out the cause. Persistence paid off in both cases, and we chalked it up to a future firmware fix.