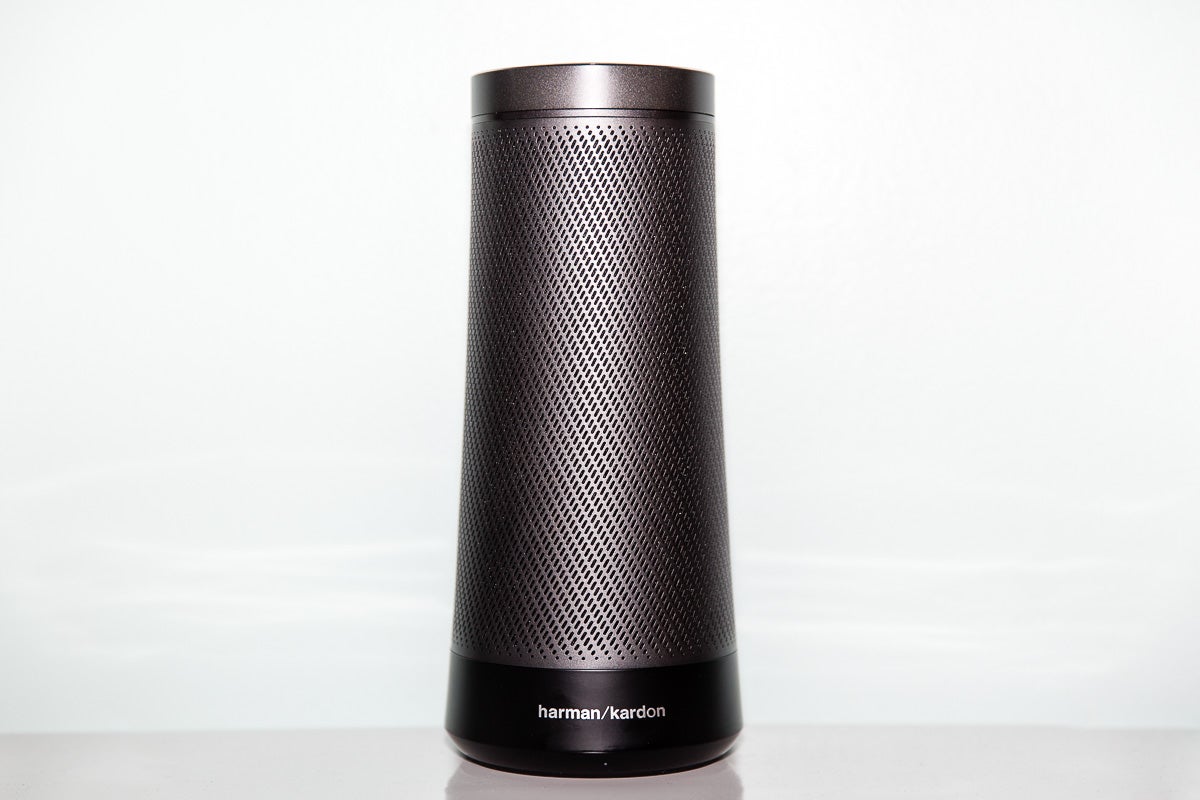 If digital assistants were actual people, there would be no place to sit in my living room. Between Siri, Google Assistant, and Alexa, things are already pretty crowded. Now, Microsoft’s Cortana wants in, and it brought its own home, a speaker called the Harmon Kardon Invoke. Where does it fit into the invisible assistant landscape? It’s complicated.

Microsoft first introduced its Cortana assistant back in 2013, naming its assistant after a similar, disembodied AI character from the video game Halo. Its big year, however, was 2015, when it made its way onto Windows 10 computers, Xbox consoles, as well as the other big mobile platforms, Android and iOS via dedicated apps. So, while Cortana is in a lot of devices, this is her first foray into the speaker space currently occupied by heavy hitters like the Google Home and the Amazon Echo.

The Harmon Kardon unit itself is mostly cylindrical, taking the shape of a fancy vase. The top of the speaker lets you summon Cortana with a touch, and there’s also a rotating dial to control volume. It’s considerably bigger than the Google Home or the new Echo, but it’s also noticeably louder when the tunes get cranking.

When the speaker was first announced, neither Apple nor Google had introduced their plans for high-fidelity home speakers yet, which made the Harmon Kardon audio chops a real differentiator but also drew ire for pushing its price tag up to $200. Now, it sits firmly in between the standard home hubs and higher-end audio systems like the $399 Google Home $349 Max Apple HomePod.

Setting it up This is where things start getting complicated. I use a Windows 10 machine regularly, but I don’t actually interact with Cortana very much, if at all. I know it’s there, but it often just seems easier to stick to the old-fashioned inputs when doing things on my computer. I’m also roped into a lot of Google infrastructure for things like calendars and email. If you’re fully entrenched in the Windows platform, setup will be easier, since you’ll already have things like the “Continue on PC” app-enabled for syncing your phone and your computer. If you’re not, prepare to do a little work.

Once I downloaded the Cortana iPhone app, getting the speaker online for basic functionality was pretty simple. The app brings the device to your network automatically and runs you through some basic functions, like asking the weather or setting reminders. Cortana can learn new “skills” like Alexa, but setting them up is a tricky process.

To add a skill, you have to go into Cortana’s Notebook section of the app, which is where it stores information it knows about you. From there, you can add new things, but you’ll have to make sure that your devices are updated and you’re prepared to jump through a few hoops. For instance, I clicked on the Philips Hue skill to teach Cortana how to turn my lights on and off, but it just redirected me to the Home Control section of the app. Bouncing around the app is confusing.

The Invoke speaker itself is actually very nice. Its 4.2-inch diameter footprint is relatively large but keeps the 9.5-inch tall speaker stable. The light on the top of the device that show when Cortana is active or thinking about your request are also attractive, giving off a pale glow that’s more appealing than Google’s dots.

The physical dial on top of the speaker to adjust volume is also really nice. I didn’t think I would use it as much since I typically interact using my voice, but it’s great if you want to turn it up or down in a hurry.

The speaker setup inside includes two passive radiators, three tweeters, and three woofers, and it really makes a difference in terms of volume and the amount of bass it cranks out. I put the device in the corner and it projected around my average-sized living room with no problem.

Sound quality is a big plus here. Of all the standard digital assistant speakers, this one is near the top when it comes to bass, volume, and overall audio performance. It will certainly be eclipsed by the bigger, more expensive speakers from Google and Apple coming down the pipe, but they’re also more expensive.

If you’re fully embedded in the Microsoft ecosystem, you’ll appreciate how tightly everything is integrated. The calendars works great and so do the reminders. If you’re a heavy Skype user, you can also make calls with voice commands.

Cortana itself has a natural sounding voice and interacting with it is more human-like than the others. Asking it questions is also often fruitful. Asking “What sound do whales make?” for instance, doesn’t result in a whale song like it does with Google Assistant, but it finds an Ask.com page and reads the pertinent details. It’s not as entertaining, but it is more informative.

But for all the good, Cortana-in-a-can like this shows the unfinished edges and slight annoyances that other platforms have figured out. Asking Cortana to play a game results in a single guess-the-movie game, which skews heavily toward old military movies for some reason. And again, adding new skills is a chore.

Because Cortana lives inside an app on most phones, she’s not as tightly integrated into your mobile device as Siri or Google Assistant is with iOS or Android, respectively.

Skype calling is a nice feature, but you need Skype credit if you want to make actual phone calls, which isn’t the case with Google Home. It’s also not quite as simple as leaving a voice message via Alexa, a feature that’s surprisingly useful.

When you ask Cortana to play a song, it talks over the intro like a radio DJ while introducing the track. It’s fine for most songs, but can be annoying if you’re trying to listen to something like stand-up comedy or a song with a really awesome intro.

Who should buy it

Most home assistant speakers feel like part of your home entertainment center, but the Invoke feels more like a computer accessory. There’s no Apple TV or ChromeCast equivalent to work it into your living room setup unless you’re using a Windows PC as a media center.

Buying a home assistant right now is making a bet on which platform is going to best serve you down the road, and Cortana has a lot of catching up to do to beat the other big names in the game, even if it is built into all up-to-date Windows PCs. If you’re looking for a simple smart speaker to crank out tunes and handle basic tasks, or you’re a full-on Windows acolyte, the $200 price tag may be worth it for you. If you’re looking for the hub for a smart home full of connected gadgets, one of the other camps will likely treat you better.