Battery power allows this camera to move around, but it performs best in its base. 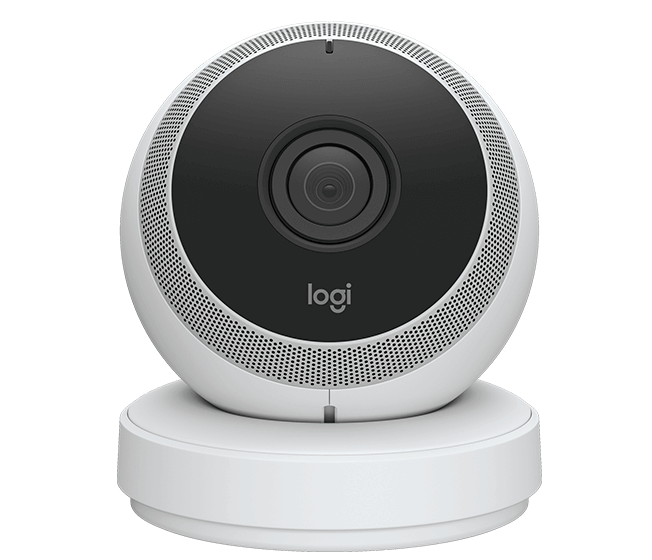 Of all the home security cameras we’ve tested so far, the Circle takes the prize for quickest setup. Once we took it out of the box, we had it up and running in about three minutes. All you need to do is download the iOS or Android app, turn on your phone’s Bluetooth, enter your email address, and create a password. When powered on, the camera and the Logi Circle app recognize each other after a few seconds. Then it’s simply a matter of selecting the wireless network you want to use and creating an account for cloud storage.

The camera itself comes with a pivoting base as well as a detachable magnetic plate with a 10-foot USB cable, and a wall mount. This means you can set it on any flat surface or a wall. We placed ours on an office bookshelf and ran the Circle through its paces over the course of two weeks; we used it in both its wired and wireless capacities to see how well it stacked up against other home security cameras.

Like many other security cameras, the Logi Circle shoots 1080p video and offers the ability to monitor your home in real time or with smart alerts via a smartphone app. What distinguishes this compact ball of a camera from many of its competitors, however, is the ability to use it both as a wired (i.e., plugged in) camera and as a wireless one. The Circle comes with a 1,600 mAh rechargeable lithium battery that gets topped off whenever the camera is placed on its circular charging base. Take it off that base and it will switch to its internal battery.

We were excited to test out the camera’s wireless chops, assuming it would give us an opportunity to place it in a number of new, outlet-less locations, like our garage. But as we quickly learned, the feature is far less exciting than it sounds. The main problem is that rechargable battery. If you’re shooting a relatively busy scene in 1080p during daylight hours, you’ll squeeze maybe two and a half hours out of the camera before it needs a recharge. While we got close to three and a half when shooting the same scene during the more quiet evening hours, that’s still not a lot of hours—especially when you compare it to something like the Arlo Pro’s six months of battery life. Shooting wirelessly at night is even worse. We got an hour and 50 minutes.

You can select a power-save mode to buy yourself more time, but that significantly diminishes the video quality, and still only lasts about half a day. Are there scenarios where you might want to capture just a few hours of video? Sure. But, honestly, we can’t think of many. And here’s the other problem: Once you move the camera more than 15 feet away from your wireless router, you get significantly more dropped and interrupted video feeds. That was enough for us to return the Circle to its charging base and keep it there.

In this capacity, the Circle remained competent, but that’s about it. Its 1080p daytime image isn’t as sharp as those produced by the Nest Cam and Arlo Q. And although it did fare better at night than those other two cameras thanks to a much brighter image, its 135-degree fisheye lens still had some obvious distortion around the edges.

As far as cloud storage goes, the Circle offers unlimited storage from the past 24-hours for free, which is better than the Nest Cams, but not as good as the Arlos. If you want or need more, you can choose between Circle Safe Basic and Premium monthly plans. The former ups the storage to 14 days for $4/month (per camera) while the latter gives you a full 31 days for $10/month (per camera). You also get person detection, motion zones, and advanced event and alert filters.

Our experience with the Premium plan (you get a free trial when you sign set up your camera and add it to your account) went relatively well. Features like person detection mostly worked (our 110-pound dog was mistaken for a person a couple times), but weren’t nearly as accurate as the algorithms the Nest uses. Motion zones, which let you define a specific area of the room to monitor, and smart geofencing both functioned as advertised.

One feature we really enjoyed was the Day Brief option. Tap a button on the app and you can play or download a 30-second super-fast recap of the entire day’s recording. It’s a helpful way to find a specific recorded moments, and something we wish more security camera apps offered.

Auto night vision up to 15 feet