30 percent off an Amazon TV and Dot, and other deals today

A quick guide to getting the goods for cheaper. 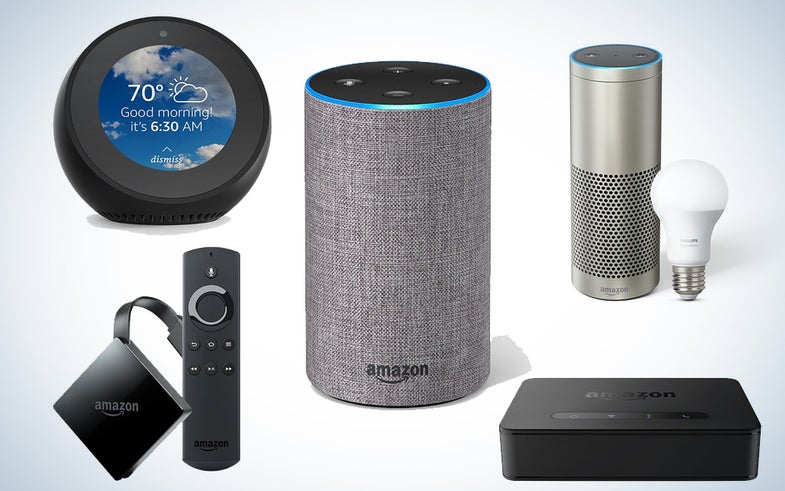 Amazon launched an army of new smart products into the market yesterday led by a battalion of Alexa-equipped hardware, including a new Echo speaker and the Echo Plus, which has a smart hub built in.

The most interesting thing about the new Echo is that it now costs just $99. That’s $80 cheaper than the old Echo, and $249 cheaper than the Apple HomePod. Amazon will also sell you three new Echos for $249—put the code ECHO3PACK at checkout—if you want to take advantage of the recently-added multi-room music capabilities.

The new Echo sports an upgraded sound system with a bass-specific speaker to boost the low-end sound performance.

The Echo Plus is like a traditional Echo, but now packs a full-on smart hub in a shell that looks like the old Echo speaker. It puts an emphasis on making it easy to set up compatible devices. So, if you say, “Alexa, detect devices,” it will look for compatible gadgets—like Philips Hue light bulbs—and link them without a fuss. It will cost $150 at launch, but will come with a Philips Hue bulb to get you started down the expensive rabbit hole that is smartening up your house.

The Echo Spot is the only new product to include a screen. The round display on its face looks quite a bit like a Nest Thermostat at first glance. Because the screen is round, it’s not really useful for watching videos or looking at photos like the Echo Show is, but it can display useful information like the weather and the time so you don’t have to ask Alexa out loud. It will cost $130 and start shipping in December, but you can start dusting off your nightstand now if you like

The last piece of Alexa hardware is called Connect and it’s basically a $35 speakerphone that lets you make calls through Alexa’s calling feature, including to 911. It plugs into a typical phone jack, so it’s meant to replace a landline or VOIP service that may have been forced upon you as part of a cable bundle.

Now for the Echo Buttons. The buttons sync up with an Echo and let your family play gameshow-style games by buzzing in. There will be more features added to the buttons in the future, but they’re only $20 for a pack of two and will be built-into the API, so they could eventually be used to perform Alexa-based actions. So, if you wanted a Barry White button in your room that dimmed the lights, turned off the TV, and played “Can’t Get Enough of Your Love, Baby” at just the right volume, you could make it happen.

Moving on from the pile of new Echos, the $69 Fire TV now supports HDR content as well as 4K and Dolby Atmos for sound. If all that sounds familiar, it’s because Apple’s $189 Apple TV 4K promises similar functionality.

Since Amazon just released a bunch of new home products, expect to see some older Amazon products on sale. For now, grab an Amazon Fire TV, Alexa voice control remote, and an Echo Dot—one of the only products that didn’t get an upgrade—for 30 percent off. The $90 package is now just $60.

Today, Amazon has certified refurbished Luma home wireless Wi-Fi routers for 43 percent off. The devices—typically $350 for the set—will automatically perform security scans, can be controlled via an app on your smartphone, and work with Amazon’s Alexa. $200.

Right now on Massdrop you can get your hands on a 65-inch QLED 4K Samsung TV for $1000 less than the suggested retail price. The flat-panel smart TV supports Dolby Digital Plus sound and has 4 HDMI inputs and three USB ports. The drop has already reached lowest price it will go—$1,800.

This Black Mountain exercise package is currently only $30 (was $44). The kit includes a stability ball, pump, and five 48-inch resistance bands. If you don’t need the ball, most of the savings comes from the resistance bands, which—for the first time—are less than $20 on Amazon.