This robotic eyeball can perform groups of tasks based on your motion or lack thereof. 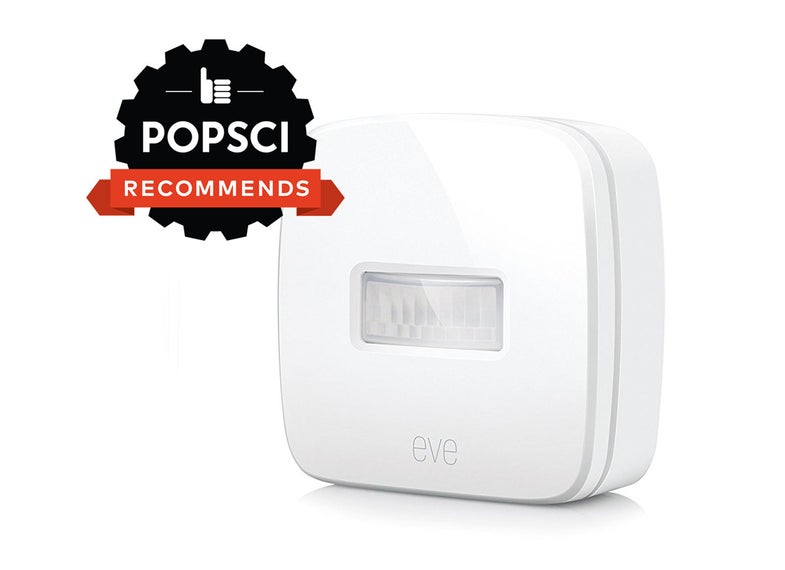 This wireless motion sensor is part of Elgato’s lineup of HomeKit-compatible accessories and can be used to trigger “scenes” and rules based on your movement (or the lack thereof) around your house.

Like most HomeKit accessories, the Eve Motion is a snap to set up. It runs on two batteries and uses Bluetooth low energy (BLE) to communicate with your other iOS devices and Apple TV. No hubs or Wi-Fi setup required.

While you can use Apple’s Home app to configure the Motion, it makes more sense to download the dedicated Elgato Eve one, which gives you more options. After inserting the two included AA batteries into the sensor and launching the Eve app, you choose to add a new device and the Eve Motion should pop up immediately. After that, it’s simply a matter of scanning the unique HomeKit code on the sensor with your iPhone or iPad, selecting the room where you’ll be using it, and then updating the sensor’s firmware. All told, the process takes about six minutes.

You can also tweak the motion sensitivity and duration values during this initial app setup. The latter is used to determine how quickly the motion sensor will re-detect motion after it’s been triggered.

As with Apple’s Home app, you can use the Eve app to create “scenes” that execute multiple actions simultaneously with a single command (An “I’m Home” scene could trigger all the HomeKit-enabled lights in your home to turn on when the Eve sensor detects motion, for instance). You can also create timers and rules to set scenes automatically at specific times or with specific motion triggers.

To test the Eve Motion, we used it in various parts of our home—including the living room, basement, bedroom, and office—creating location-specific scenes, timers, and rules based on our movements.

The design is typical of Elgato’s other HomeKit-enabled Eve devices. It’s 3 x 3 x 1.25 inches, white, and completely unassuming. That’s fine, even preferable, given that motion sensors generally aren’t supposed to draw attention to themselves.

Of course, the Eve Motion is much more than a simple motion detector. It can notify you when it senses movement as you’d expect, but it can also automate groups of actions when it detects specific motion. With the help of an Eve Weather sensor and an energy switch, we used our Motion review unit to help turn on the fan in the living room window when it noticed motion and the outside temperature was 72 degrees or less.

The Eve Motion can use your lack of motion to trigger home automations, too. For instance, we created a rule that turned off the lights in the basement if the sensor didn’t register any motion in for an hour.

Throughout the testing process, the Eve Motion performed consistently well. It has a 30-foot motion detection range, a 120-degree field of view, and thanks to its IPX3 weatherproof certification, can be used indoors and out.

We did have some initial trouble setting up the Eve with its companion app. Something apparently went wrong during the firmware update and the app got hung up and subsequently wouldn’t recognize the sensor. When deleting and reinstalling the app didn’t fix the problem, we finally reset the motion sensor and reinserted the batteries, which did the trick.

The main drawback for us really came down to price. At $50, you’re paying a lot for a device that only works in one smart home ecosystem. Throw in the fact that you need either an Apple TV or an iPad to serve as a home hub if you want to control the Eve Motion (or any other HomeKit compatible device) remotely, and you’ve got an even more expensive bar to clear before you can really take advantage of the Eve Motion’s full potential

If you live in a predominately Apple household and are fairly committed to the HomeKit smart home platform, the Eve Motion is an undeniably useful addition. It’s a little pricey, but it opens up a world of new home automations for Apple users willing to part with