Smarts make this connected detector worth the extra cost. 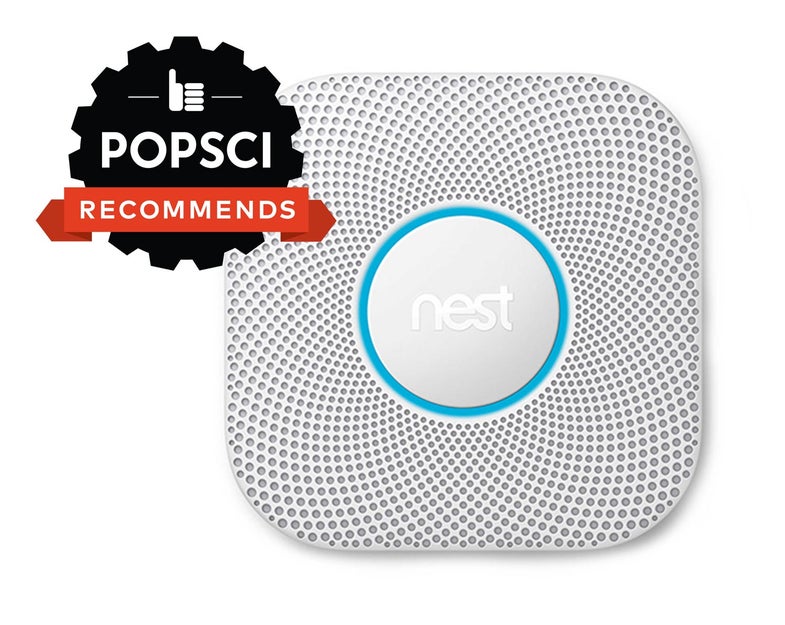 Smoke alarms are supposed to provide peace of mind, but many produce only headaches and white-hot rage. Whether it’s cooking-related false alarms, 3 a.m. low-battery chirps, or discovering that our detector was never actually working in the first place, there’s always been plenty of room for improvement in this utilitarian category. The second-generation Nest Protect addresses these traditional shortcomings with smart, reliable alerts and plenty of thoughtful features.

Like everything else Nest makes, the Protect is simple to install and set up. If you don’t already own a Nest product, you download the app, scan the Nest Protect QR code on the detector’s underside with your smartphone, and then connect it to the Internet. Physical installation entails drilling a thin mounting plate into your ceiling with the included screws and then twisting your Protect into place. Although Nest makes a wired version of the Protect, all of our existing home smoke alarms are battery powered. so we opted for the wireless version which can last up to five years on six AA batteries.

To test the Protect we installed it in two locations over the month and a half we had it: The hallway just outside our kitchen and in our bathroom. For the latter location, we wanted to see whether the alarm could differentiate between steam and smoke, something a few of our older alarms failed to do. Obviously, we couldn’t test the Protect’s carbon monoxide sensing capability, but we did use smoke matches to analyze its alarm and messaging capabilities. We also compared the Protect to our own temperamental Kidde smoke alarms.

Maybe it’s because the bar is so incredibly low in this category, but the second-generation Nest Protect is a lot more exciting than a smoke alarm should be. We chalk it up to the surprising number of smart, thoughtful features that address nearly everything we find annoying about traditional dumb smoke alarms.

As someone who has played “guess which smoke alarm is beeping” numerous times in the middle of the night, it’s comforting to know that in lieu of intermittent chirps you’ll simply get a message on your phone well before the Protect’s batteries are ready to give up. You can trust those alerts, too. The unit checks its own sensors and batteries up 400 times a day to make sure everything is working as it should be. It can also perform a quick check of its speaker once a month if you enable the Sound Check test in the Nest app. When a problem is detected, a yellow ring of light will alert you. When a potentially big problem is detected, a red one will light up.

What’s particularly nice about the Protect is that instead of simply shrieking and yelling “fire, fire, fire!” like our Kidde, it announces what it thinks is wrong in a calm voice before any alarm starts blaring. This gives you a chance to address the issue on your smartphone if an alarm isn’t actually necessary (you’ve burnt the toast again).

As far as its smoke sensing capabilities go, the Protect uses a split‑spectrum sensor that Nest claims can measure two wavelengths of light to detect smoke from both fast burning and smoldering fires. All we could do was use our smoke matches, which did reliably trigger an alarm in both the Protect and our Kidde. Again, we received a verbal smoke warning from the Protect before the alarm went off. The Kidde just shrieked at us. Best of all, we could actually use the Nest app to silence the alarm.

The Protect’s built-in humidity sensor seemed to do its job, also. No matter how many hot showers we took, we couldn’t get the unit to accidentally trigger.

If you happen to own other Nest products and have a Nest Aware subscription, the Protect can pull off even more impressive tricks. For instance, if an alarm sounds, your Nest Cam will start recording video, and your Nest Thermostat will automatically shut down the HVAC system to mitigate the spread of any existing fire. Smart.

But ultimately, it was little reassurances that won us over. When you switch off the lights in a room the Protect is in, it’ll give you a quick green glow. Nest calls this a “Nightly Promise,” and it’s actually comforting. The Protect also conveniently serves as a nightlight, emitting a soft, white glow when you walk under it.

With all of its built-in features, this smart detector doesn’t come cheap, but it excels in providing a sense of security and reliability. In this case, the smart functions actually solve real problems, like false alarms and panic-inducing alerts, which makes this monitoreasy to recommend.