Smarten up your lights without changing your bulbs. 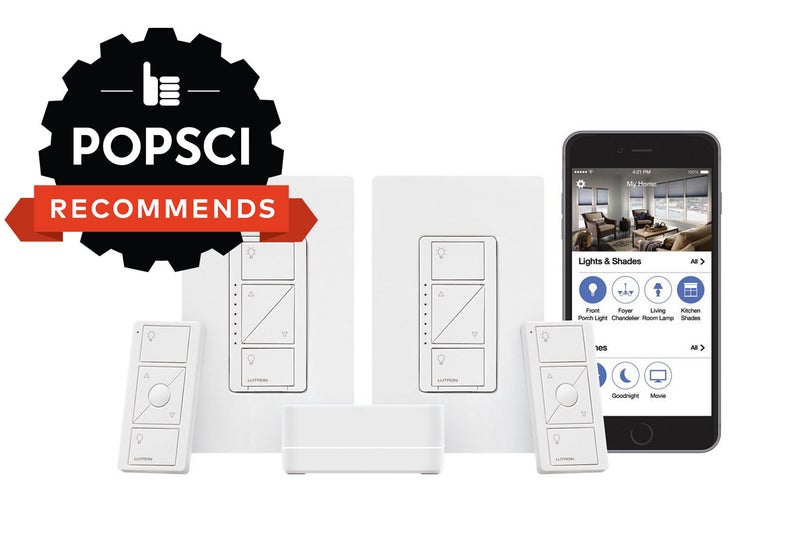 The hardest part about setting up a Lutron starter kit is deciding which one to buy. There are currently five different configurations to choose from, each with a different assortment of in-wall switches, remotes, and plug-in dimmers. You can also assemble a system piecemeal, grabbing individual components as you see fit. Either way, if you want to control your lights from your phone, tablet, or with your voice you’ll need to invest in the company’s smart bridge (tip: getting it as part of a kit is waaay more cost effective). We tested out the dimmer kit with a smart bridge for wall and ceiling lights, which includes the aforementioned bridge, two in-wall smart dimmers with a wall plate, and a pico remote. We also tried one of Lutron’s separate plug-in lamp dimmers.

Installing the wired switches is a lot easier (and quicker) than you might imagine. Just turn off relevant light switch’s power at the breaker, remove the wallplate from the switch, and then remove the switch from the wall. After disconnecting the three wires connected to it, you use the included wire connectors to re-attach them to the Lutron wall switch. Screw in the adapter to the dimmer, and all that’s left to do is snap on the wall plate and flip the breaker back on.

Unlike some hubs, the Lutron smart bridge requires an ethernet connection so you’ll want to make sure your current router has a free port before you bring home any Caséta kit. After you’ve powered on the bridge, you download Lutron’s app to finish the setup process. All told, it took us about 20 minutes to set everything up.

We used the Lutron Kit in our living room, replacing two standard toggle switches controlling a total of 16 recessed LED flood lights that line the perimeter of the room. We also used the standalone plug-in lamp dimmer with a reading lamp in the corner of the room. That process is as straightforward as you’d expect: plug it into your main electrical outlet and then plug one or two lamps into the outlets on either side of the dimmer.

Smart home lighting doesn’t have to be all cool arctic auroras and warm savanna sunsets. While many people associate “smart lighting” with Hue, Lifx, or some other multi-colored wireless light bulb brand, companies like Lutron swap your switches so you can control your current lights over Wi-Fi using a bridge.

The company’s solution means that with very few exceptions, you won’t need to mess with any of the existing lights in your home. Whether you currently have dimmable LEDs, halogens, or incandescent light bulbs, Caséta dimmers work with pretty much all of them. And if you’re still worried about compatibility, Lutron even has a handy tool that’ll tell you whether your bulbs are compatible.

Throughout our month-long testing period, the system worked flawlessly. The included Pico Remote—which is basically just a mobile version of the in-wall switches—is responsive and convenient to have around the coffee table and couch. Siri and Alexa integration were easy to setup and use as well. In addition to the latter two voice assistants, Caséta systems work with Carrier Cor, Ecobee, Google Assistant, Nest, Honeywell, Logitech, Samsung SmartThings, Sonos, and others.

Like Apple’s Home app, Lutron’s allows you to create scenes and automations by grouping your existing lights into rooms. Although we didn’t use the switches in any other place but the living room, it’s nice way to organize things, particularly if you plan on controlling your lights with voice commands. You can also schedule specific scenes to coincide with a fixed time or to match the sunrise and sunset. The app even has a geofencing and “smart away” modes. The former lets you program the lights to turn on and off when your phone leaves or enters a predefined area around your house. The latter automatically cycles lights on and off in the evening to make it appear as if you’re home when you aren’t.

One oft-mentioned Lutron lament is the fact that you can’t control how fast or slow the lights themselves fade on or fade off. Granted, it would be nice to program your bedroom lights to very gradually turn on in the morning, but we can’t think of many other uses for such a function. Another small complaint? If you’ve already invested in some wireless smart bulbs, don’t expect them to work with Lutron dimmer switches. As with other load-bearing dimming switches, Lutron’s regulate the amount of current being sent to the fixture, which means some very weird (and potentially dangerous) things start to happen if you try pair them with, say, Hue bulbs.

But again, you’re not buying a Lutron system if you already have a house full of Wi-Fi lights. You’re buying a kit to simplify things. And that’s a compelling proposition, particularly when you consider the growing number of smart lights options out there.

You have to try really hard to find fault with Lutron’s easy-to-install smart lighting kit. It works with pretty much every major smart home platform, it has a well-designed, intuitive app, and there’s a very good chance it’s compatible with the lights you already own. If color doesn’t factor into your smart lighting needs, do yourself a favor and look into one of Lutron’s Caseta wireless kits.