As usual, the answer to every headline question is, “probably not,” but I’ll leave this for you to decide. My... 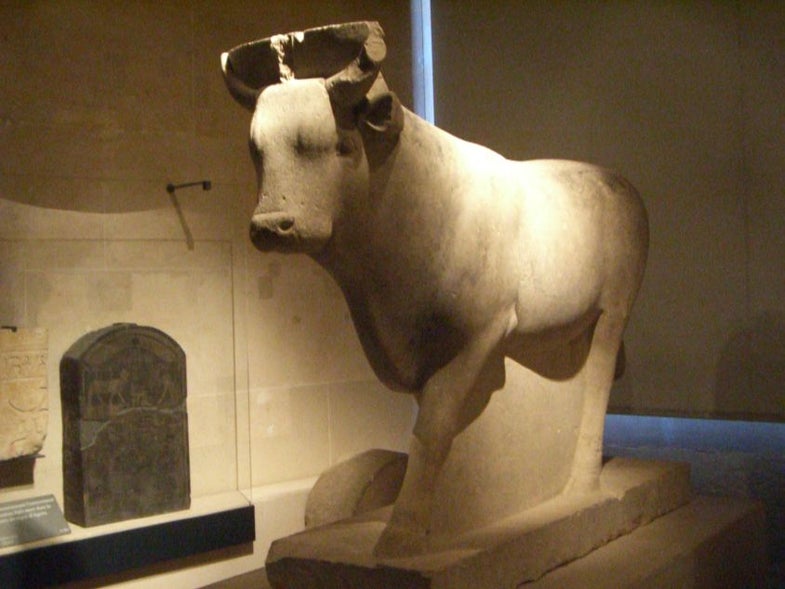 As usual, the answer to every headline question is, “probably not,” but I’ll leave this for you to decide.

My good friend Dr. Steven Novella sent me this video in the hopes that we might talk about it on this week’s Skeptics’ Guide to the Universe (which we do – look for our discussion to come out on Saturday). In case you don’t want to sit through all quite boring eight minutes, the video documents Brien Foerster’s trip to visit the Serapeum of Saqqara, a necropolis found near Memphis, Egypt, built some time around 1300 BCE during the reign of Ramesses II.

Brien Foerster is a frequent talking head on the unintentionally hilarious Ancient Aliens television show, and so you already know that there must be more to the Serapeum of Saqqara than meets the eye. Foerster is focused on the “giant underground stone boxes” found in the necropolis, which archaeologists and historians say were used to bury the sacred Apis bulls. Each “box” is 70-100 tons of granite.

“The precision is very 21st century, or at least 20th century,” says Foerster. He notes that the interior of the tomb is “within a few ten thousandths of an inch of being perfectly flat” and that the angles are “exactly-ish 90” degrees.

Red text flashes over the video: “This precise to bury a bull???”

Indeed, it’s difficult for some to imagine why people would go to such trouble of creating a box with exactly-ish 90 degree angles and very flat sides just for a dead bull, just as it’s difficult for others to imagine why people would pay $850 just to bury a dead hamster. The explanation is the same in both cases: because they thought it was important.

The Apis bulls were incredibly sacred creatures to many ancient Egyptians, having been one of the first cults in Egyptian history. Bulls represented strength, determination, and virility, and so were often associated with pharoahs. The Apis bull was both a deity and manifestation of the pharaohs.

If there’s one thing the ancient Egyptians loved, it was post-mortal conspicuous consumption, so it’s impressive but not exactly beyond belief that they would spend so much time and effort to build elaborate tombs for the beings they worshipped.

It’s also not surprising that they could create a flat surface or angles that are exactly-ish 90 degrees. The Egyptians boast some of the earliest known texts on geometry, like the Rhind Papyrus (from around 1650 BCE) and the Moscow papyrus (from about 1850 BCE). The latter papyrus indicates that the Egyptians could approximate pi (as 3.16049) and find the volume of a truncated pyramid. It stands to reason that 500 years later, they would be able to carve a flat surface and make a corner of exactly-ish 90 degrees.

Setting these facts aside, I was curious what Foerester imagined the tombs were actually for if not Apis bulls, and how the ancient Egyptians built them if not for their own mental acuity. He doesn’t go into that in his video, so I turned to Google for help. Searching for the title of his video, I found some fascinating “theories.”

The most obvious is, of course, ancient aliens. Whenever people can’t imagine how anything got done without the use of modern technology, they assume extraterrestrials must have helped. For instance, I can’t imagine how friends used to meet up at bars before smart phones with texting and GPS, so I assume they were delivered straight to the beer garden by bug-eyed creatures in flying saucers.

The ancient aliens of Egypt were, of course, burying giants, not bulls. Aliens don’t care for bulls.

It’s worth noting that not everyone is on board with the ancient aliens hypothesis – some suspect angels, like this blogger who thinks the tombs were used for “Nephilim hybrids.” Nephilim, some people believe, were fallen angels who came to Earth to have sex with women, like Jeff Goldblum in Earth Girls are Easy. Apparently they were quite large. If you know what I mean.

So there are your options: the Serapeum was built by either ancient aliens, ancient angels, or ancient humans who were smart and liked bulls. Three equally plausible hypotheses.