The Fractal Is A Beautiful Gift To Mathematicians And Stoners Alike 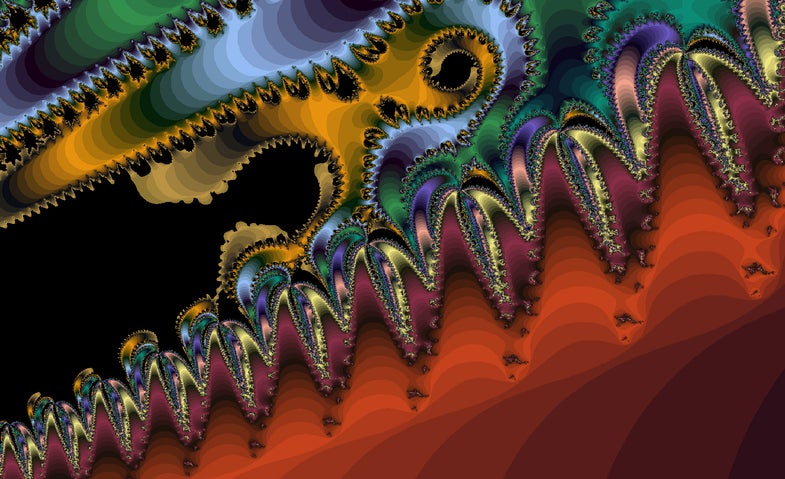 Consider the fractal. Endlessly recursive and elegantly simple, it’s the one-word answer to whether math can be beautiful.

Originally created by Benoit Mandelbrot in 1980, the fractal is a visual representation of a simple equation:
Znew=Z old 2+C.

The “C” value must lie within Mandelbrot’s set, numbers that have both a real and imaginary component.

By color coding the numbers output by the equation, software is able to create the intense visualizations we’ve seen on so many T-shirts.

Fractals are useful because they’re infinite, and seemingly random. Their iterations have been used to inspire circuitry and antennas, and can be often observed in nature.

Mandelbrot himself said, “”Clouds are not spheres, mountains are not cones, coastlines are not circles, and bark is not smooth, nor does lightning travel in a straight line.”

To make more complex fractals, mathematicians and tinkerers alike have altered the recursive equation. An easy example is raising Z to the third or fifth power, which adds more spirals to the visual output.

However, little scientific rigor has been applied to why humans find fractals so cool. But we do. There are websites to make your own fractals, and fractal software that does the same task at a more complex level.

There are even fractal shows, held in the planetarium of the New Mexico Museum of Natural History and Science.

Check out a gallery of some more cool fractals. If you’re interested in making your own fractal, we recommend the free software Xaos. It takes a few minutes to figure out how each variation of Mandelbrot’s equation changes the look of the fractal, but the controls are simple and the results are awesome.