Tigers, Asian elephants, wild boars, and clouded leopards have had population growth despite people living nearby. 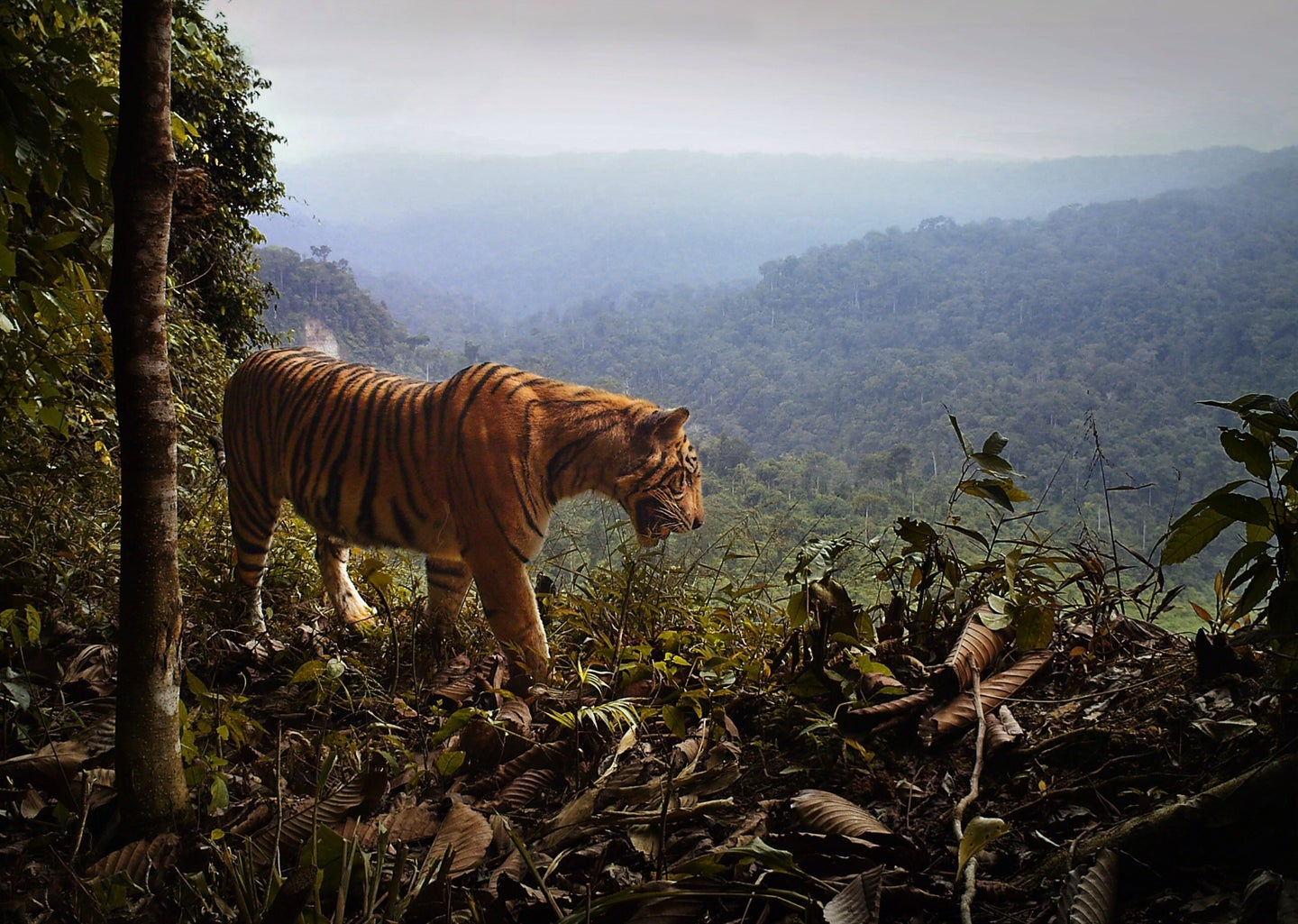 A Sumatra tiger on the edge of a forest. Matthew Luskin
SHARE

The bad news on biodiversity loss can be pretty hard to miss, as Planet Earth heads into a sixth age of mass extinction. The World Wildlife Foundation’s Living Planet Report 2022 paints a grim picture, claiming that wildlife populations have decreased by 70 percent in only 50 years. And the primary culprit? Humans.

However, according to a study published today in the journal Science Advances, some of the largest animals in Asia are thriving and seeing population growth while living alongside humans.

The team of researchers examined paleontological records showing where Asia’s 14 largest animals species have been distributed throughout history and compared it with their current populations in present-day tropical forests near human settlements. Four species—tigers, Asian elephants, wild boars, and clouded leopards—showed an increase in population in areas with human infrastructure.

[Related: An ‘extinct’ Australian mouse has been thriving on a remote protected island.]

According to the authors, Southeast Asia is an ideal setting to study conservation threats due to large animal diversity (both threatened on not-threatened), extreme deforestation, and poaching. “These results show that, under the right conditions, some large animals can live nearby humans and avoid extinction,” Zachary Amir, a study author and PhD candidate at the University of Queensland in Australia, said in a press release. “These results challenge the narrative within some conservation circles that humans and megafauna are incompatible.”

The study also shows that the habitat loss from deforestation is still impacting some species, with clouded leopard numbers dropping a bit in areas where significant numbers of trees had been cut down. According to the United Nations, forests are home to more than 80 percent of all land-dwelling species on Earth and the world lost 3.3 million hectares of forest areas between 2010 and 2015. Fewer trees in these habitats mean fewer places to live and fewer critical resources like food and water.

According to Amir, if the large animal species are not hunted, they can live in relatively small habitats and near humans. “Previously, there have only been a few examples of large Asian species thriving in small habitats near humans, notably in Mumbai, India where leopards in an urban park prey on stray dogs,” Amir said in the release. “Thankfully, we found that a wider range of animals can coexist with humans.”

The study cites how the elimination of poaching and forest restoration efforts in Singapore have helped sambar deer and wild boars populations, which are both now commonly seen in the the Bukit Timah Nature Reserve.

“If we replicate those protection efforts in larger forests and other counties, we may see positive impacts right around the world. But before this can happen, humans need to get our act together and limit poaching,” Kamir added.

While the results are largely positive, there was a strong decline in a few species, particularly in tapirs, Sumatran rhinoceros, sun bears, and guar likely due to continued poaching and habitat loss. In the case of the Sumatran rhinoceros, the decline likely resulted from, “well-documented poaching pressure targeting rhino horn and the low reproductive performance among the few remaining females,” according to the study.

“The key innovation of this work was to systematically investigate the population trends of many different wildlife species across the region,” Matthew Luskin, a co-author of the study and research fellow at the University of Queensland’s Ecological Cascades Lab said in a press release. “Remarkably, we found no two forests currently possess the same group of wildlife compared to thousands of years ago. These results provide hope for wildlife in forests previously considered too far degraded or too close to cities. Now we’re exploring new conservation strategies for these surprising places.”