Instant soup sends a shocking number of kids to the hospital

Flimsy cups of scalding water are not stable snacks. 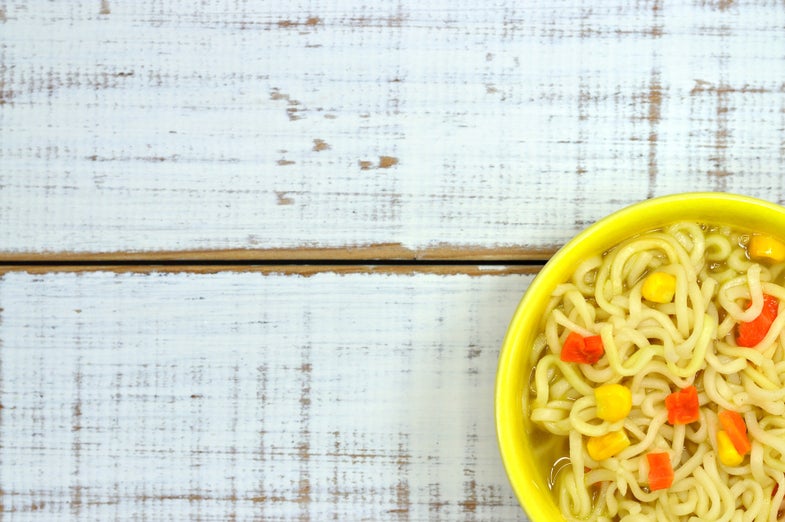 It shouldn’t surprise us that flimsy styrofoam and plastic cups aren’t exactly stable vessels for boiling water, but the extent to which those instant noodle soup containers give kids serious burns might come as something of a shock. According to a new study, about 9,500 children between the ages of 4 and 12 go to the emergency room with burns from soup every year. That accounts for 1 in 5 pediatrics burns.

The findings are being presented at this year’s American Academy of Pediatrics conference on Monday, but before we get into details let’s acknowledge that soup burns sound a little bit silly. Countless Americans have nostalgic memories of eating instant ramen in their dorm room or when they were home sick from school. Soup cups seem benign. But if you’ve never been on the receiving end of a truly severe scalding, you’re probably underestimating how bad these burns really are.

Consider this: that 9,500 figure doesn’t represent every single child who spills a bit of soup on themselves in the course of a year, or even every child who cried and required comforting and first-aid care. These are just the kids who get burned badly enough that their parents take them to the ER. One in ten of that cohort had sufficiently nasty scalds to warrant further care in the hospital, according to the new study. These aren’t just ouchies—they’re serious injuries.

Researchers are partly interested in studying this issue so they can warn parents not to let young children prepare ramen on their own, but it’s also about determining whether soup companies need to change their packaging.

Back in 2006, a researcher at UC Davis published perhaps the most in-depth analysis of the tip-over points of instant soup containers that has ever existed. As chief of the division of burn surgery, he was well aware of how badly kids could injure themselves with ramen and wanted to better understand what was so unsafe about these containers. His results showed pretty definitively what any physicist would have guessed: tall, slim containers, especially those with narrow bases and wider tops, spill the most easily. Containers with broad bases spill the least. He even calculated the angle at which various brands of instant ramen would tip over. Cup O’ Noodles clocked in at just 21.2 degrees, far less than the impressive 63.9 degrees at which the flattest, shortest container would overturn.

Of course, all those calculations are just based on a soup container sitting on an increasingly angled surface. A six-year-old carrying a flexible styrofoam bowl is much less stable, especially if they have to stretch to access the microwave.

In a 2008 study of pediatric burns, 51 percent of the kids treated were using the microwave to heat something when they burned themselves, and 65 percent of all the burns were from pre-packaged soup. That study, as well as the 2006 UC Davis one, both recommend a change to the packaging. A wide base, especially when paired with a narrower top, would be much more stable (if less visually appealing). That stability could be crucial, especially in tiny hands. In this recent study, 40 percent of the burns were to the child’s trunk, suggesting that the soup tipped over either from their hands or from a table and onto their bodies. The vast majority of the remaining injuries were to extremities, divided evenly between the upper and lower parts, and 3.6 percent of kids were burned on their head or face. In other words, kids are liable to accidentally dump boiling soup on themselves during pretty much any stage of preparation and consumption.

So far the Consumer Products Safety Commission, which is responsible for issuing recalls and making other safety rulings on household products, hasn’t taken any action to try to force soup companies to change their packaging, though they do carefully track injuries like this. This recent study used CPSC data to figure out how many children were getting burned each year, a feat which earlier studies couldn’t accomplish as they mostly used surveys within a single hospital over a series of months.

CPSC collects information about all kinds of injuries, from people hammering their thumb instead of the nail to baby walker accidents. Some products are, of course, simply dangerous—people are going to injure themselves with chainsaws no matter what. The question is whether some fundamental safety feature could prevent most of the injuries associated with a product. Many chainsaws now have automatic shut-offs, for instance, if they touch flesh. Perhaps soup companies should be forced to manufacture more stable or sturdy containers for their ramen.

But since instant soup isn’t about to change its shape overnight, researchers urge parents to get informed about the very real dangers of letting your kid make their own meal. Microwaves may seem deceptively safe, without hot surfaces or open flames for a child to hurt themselves with during the cooking process itself—but they still make the food and containers inside of them hot, which opens up the opportunity for burns. Doctors recommend preparing soup for young kids and supervising older ones; if you need the little ones to feed themselves, something like cereal, yogurt, or a sandwich might be a safer choice. You can even get toddler-safe knives to help them cut up apples and do other heat-free food prep on their own.

If your kid does get a burn, St. Louis Children’s Hospital recommends cooling it immediately under water and keeping it there for 10 minutes. Many burns won’t require a hospital visit, just a bandage and some antibiotic ointment if it’s an open wound. If there’s blistering (especially blisters larger than two inches), or if the skin looks charred or white, head to the emergency room. In most cases, even a nasty scald will heal fast. But you’re better off making sure any children in your care enjoy soup under supervision—especially if it’s in a flimsy styrofoam cup.