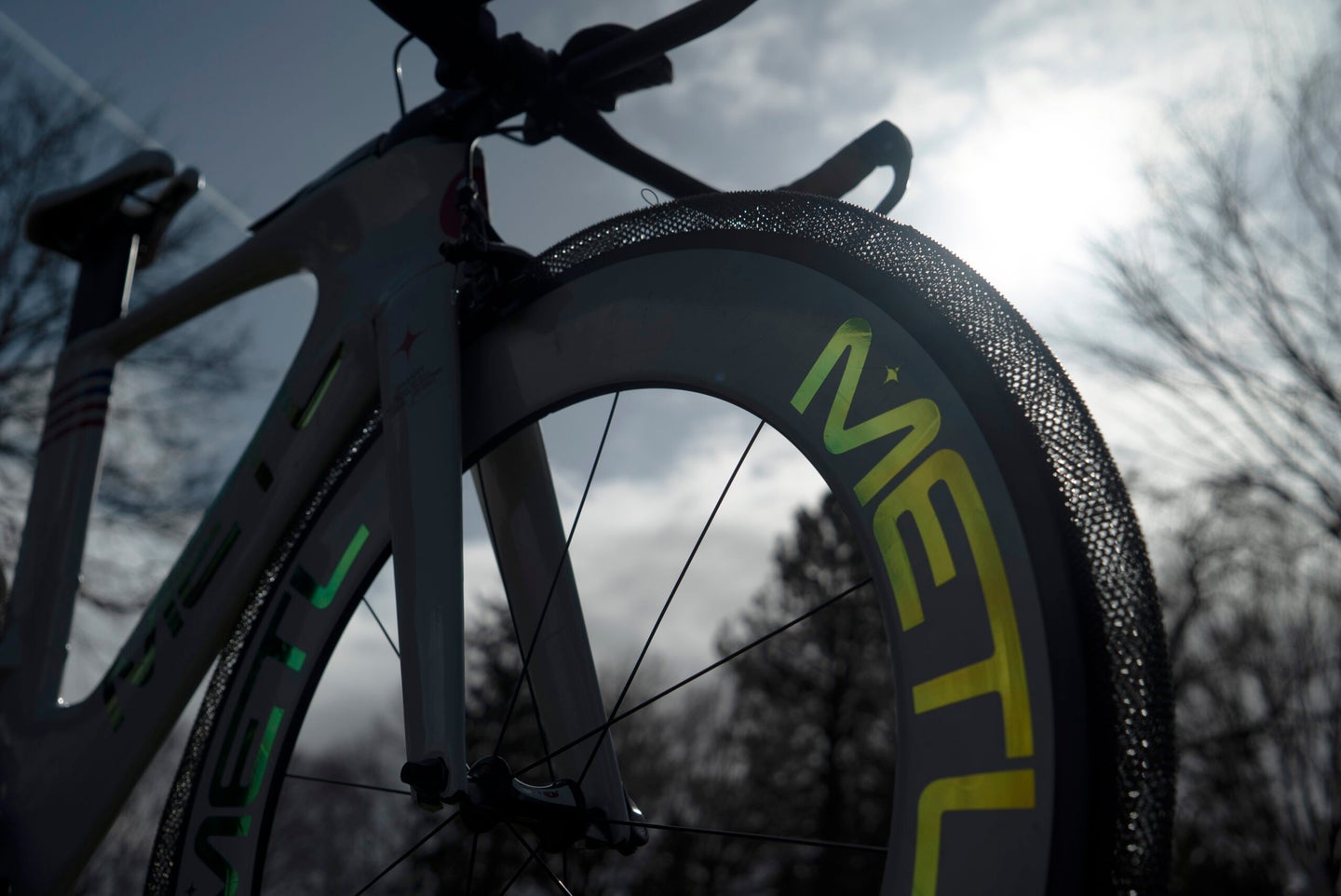 The final version of the METL tire has a rubberized coating. The Smart Tire Company
SHARE

Inflatable rubber tires would not fare well on the surface of the Moon or Mars. The terrain is treacherous, and there’s no one there to throw on a spare if you get a flat. That’s why rovers typically use tires made of metal alloys that can endure the punishment that comes from puttering around on alien soil. Now, the Smart Tire Company is preparing to offer its airless alloy METL tires adapted from NASA rover tech for people to put on their earthbound bicycles.

What are the METL tires made out of?

NASA called the tech shape memory alloy and the tires built with it don’t require any inflation. The Smart Tire Company calls it the METL, or Martensite Elasticized Tubular Loading, tire. It relies on a material called NiTinol+, which combines nickel and titanium. Its tight molecular structure allows the material to flex. It deforms, then returns to its initial shape over and over again without failing. Other metals like steel lose their springiness over time.

The METL tires are still tube-shaped, so they compress like a typical tire on impact. When you roll over a bump, the tire squashes down to absorb the blow before it can reach the rim and spokes. Because metal surfaces can be slippery, the Smart Tire Company will apply an outer layer of a rubbery material called Polyurethanium to the outer surface. That coating will also allow the company to apply different tread patterns to match various types of riding as with typical tires. Eventually, the rubber layer will wear off and the company says it can retread them to get them back on the road or trail.

Who is going to ride them?

Since they’re made of metal, you shouldn’t expect to find the METL tires on ultra-skinny race bikes. Instead, the tech will find itself more comfortable on gravel, trail, or mountain bikes. It could also work on a commuter bike where cutting every ounce of weight isn’t crucial. According to the company’s FAQ, one of the prototypes it has been testing feels just like a typical road tire inflated to 100 psi.

The company doesn’t plan to bring its consumer product to market until the first quarter of 2022. That gives it some time to decide on exactly what size and feel it wants to offer to consumers in the first wave.

[Related: Bring a bike back to life with restoration tips from the pros]

These certainly aren’t the first airless tires to hit the bike market. A company called Tannus sells an airless tire made of a patented foam that replaces the typical rubber. The company guarantees them for up to 5,000 miles. The bigger tire manufacturers like Bridgestone have also shown off non-inflatable models. None of them have really caught on, however. Weight and durability often prove tough challenges to overcome.

The Smart Tire Company intends for its METL tires to last years into the future, so don’t expect them to be cheap. There’s no official pricing yet, but fancy new alloys derived from NASA research rarely qualify as “affordable.” If the tech takes off, though, it could come down in price as it gains adoption. Until then, be sure to pack an extra tube in your bag because those springtime potholes can be every bit as punishing on a bike tire as brutal Martian terrain.