Scientists are being forced to hit the pause button on high-risk projects. 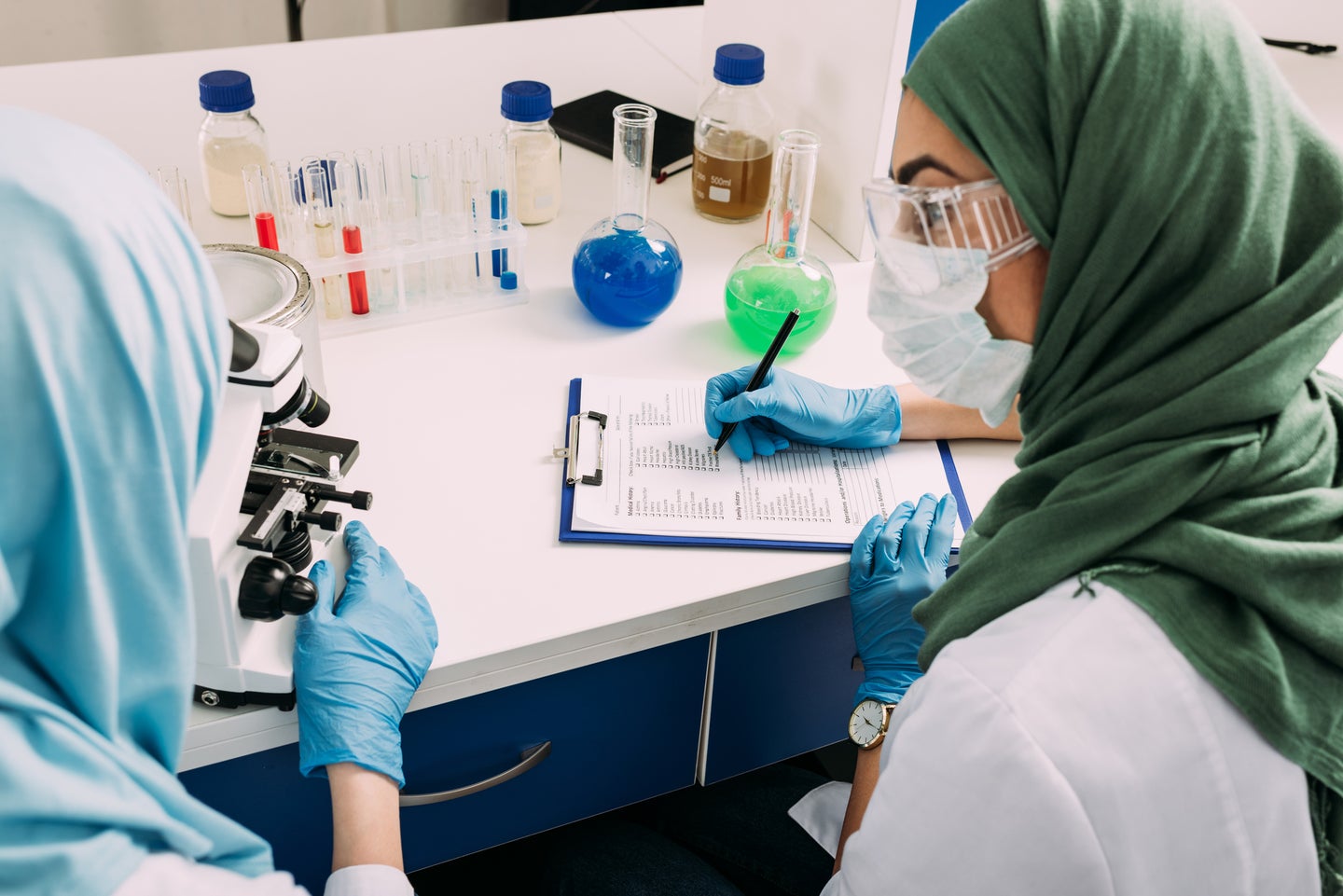 N95 masks are more secure than surgical ones, and are necessary for handling infectious agents in research settings. EdZbarzhyvetsky/Deposit Photos
SHARE

Katherine J. Wu is a Boston-based science journalist and Story Collider senior producer who has written for Smithsonian, NOVA Next, Scientific American, and more. She holds a PhD in microbiology and immunology from Harvard University.

For Kim West, dressing for work doesn’t end at home. After arriving at her office at the University of Massachusetts Medical School, West will often layer a second outfit over her shirt and slacks: a full-body gown, topped with booties, sleeve protectors, two pairs of gloves, a hairnet, and an N95 respirator. Donning this extravagant getup—designed to guard against the dangerous and often airborne pathogens she studies—has become second nature for West, who long ago lost track of the sheer amount of protective gear she cycles through each year.

She is now counting down the days until that pattern will break.

As the SARS-CoV-2 coronavirus continues to spread across the globe, research laboratories have found their supplies of personal protective equipment rapidly dwindling. In particular, a shortage of N95s—recently the target of panic purchasing by customers hoping to stave off infection—threatens to hamstring scientists like West, who make their living investigating the very microbes that put the public at greatest risk.

West runs UMass Medical’s Biosafety Level 3 (BSL3) facility—so designated because it deals in potentially deadly and inhalable microbes—where she and her colleagues grow the bacteria that cause tuberculosis, the world’s top infectious killer. “It’s crazy,” she says. “We have so many people who use N95s on a daily basis. If all of a sudden we can’t get in there to do our work, we will lose the ability to do research.”

Named for their ability to filter out 95 percent of airborne particles, N95s do protect against illnesses, including COVID-19, the disease caused by SARS-CoV-2. But experts have repeatedly implored the public to stop buying the respirators, which are both easy to misuse and unlikely to keep most healthy people from falling ill. All the same, N95s have flown off pharmacy shelves and vanished from online retail sites, with some fetching prices as high as $195.

Hospitals and clinics remain a priority for manufacturers of the masks, which protect medical professionals as they treat sick patients. But if shortages persist, infectious disease research may soon become another casualty of the outbreak, as scientists are forced to hit the pause button on high-risk projects.

“We can be creative,” says Joan Nichols, associate director of the Galveston National Laboratory in Texas, home to another BSL3 facility that’s also grappling with equipment shortages. “But at the end of the day, we cannot do this work unless we’re protected properly. And that’s going to be an issue.”

Unlike loose-fitting surgical masks, N95s are built to seal tightly around the nose and mouth, warding off the vast majority of microbes and small particles that could infect or irritate the airways. Cheap and easy to manufacture in large quantities, the respirators have found markets in fields ranging from construction work to animal husbandry and clinical research, typically selling for less than a dollar apiece.

Since the start of 2020, however, prices have skyrocketed in lockstep with the global spread of COVID-19 cases, which now number well above 110,000. Health workers have burned through supplies of the respirators, which are often mandated as single-use in high-risk and heavily contaminated settings. Compounding the severity of the masks’ shortage is their source: Many N95s, including ones supplied to the US, are manufactured in China’s Hubei province, where the outbreak first began in December.

“The truth is, it is very difficult to get N95s right now,” says Sara Cherry, a virologist at the University of Pennsylvania’s Perelman School of Medicine. “If you were only going to be dependent on N95s, you would probably be concerned right now.”

While N95 manufacturers have committed to ramping up production, the backlog has already become severe. Every major manufacturer that typically stocks UMass Medical’s BSL3 has the respirators on back order until at least June, said West, who has turned to cobbling together what she can from lesser-known boutique sellers (which she is careful not to name, to guard her own supply).

In Galveston, meanwhile, “We’re not given a date that says we may get” the respirators, Nichols says. “It just says the order can’t be filled.” Their lab is still waiting on a shipment that was scheduled to arrive in January. “I don’t see a chance of us getting that filled anytime soon,” she says.

That’s an especially big problem, she adds, considering that Galveston’s BSL3 is one of many nationwide now studying SARS-CoV-2. “If this gets worse and we run out of these materials, research is going to have to slow down,” she says. “You need to develop new kits, new diagnostics—you need to look at what’s happening with the natural biology of this new virus that’s emerged. There are so many things you need to do now because it will help with how we’re managing as this moves ahead.”

N95s already in stock at some laboratories have also begun to disappear. Since COVID-19 was first reported within U.S. borders, UMass employees have been “taking handfuls out and just walking out the door,” she said. (Most researchers have since begun stashing their equipment in more covert spots.) West has even received requests from acquaintances hoping to swipe a mask for personal outings, including someone’s recent trip to Myrtle Beach. Obviously, she said, the answer is always no.

In a Biosafety Level 3 facility, where the simple act of dropping a tube can prompt evacuation and hours of rigorous decontamination, N95s don’t get reused. With about three dozen researchers passing in and out of the facility on a regular basis, UMass’ BSL3 goes through a couple hundred of the respirators a month. By West’s latest counts, only about six weeks’ worth of N95s remain in her inventory. Some behavioral changes—like being more prudent about entering and exiting the facility, which always requires a mask change—might help delay the inevitable. But running out, West said, is no longer a question of if, but when.

To prepare, other BSL3 facilities, like the one Cherry uses at Penn, have decided to switch mostly to powered air-purifying respirators, or PAPRs (pronounced “pappers”). These are reusable, battery-driven machines that pump filtered air into a hood that entirely shrouds the user’s head. But the devices are far more expensive than their disposable counterparts, and lab managers must regularly replace the hoods, which corrode after repeated sterilizations with harsh microbe-killing chemicals. Not all labs have the resources to purchase and maintain PAPRs for constant use, and as with N95s, the current outbreak has vendors struggling to keep them in stock.

Cherry, who began rallying resources in January after noticing the plunge in N95 availability, thinks Penn’s BSL3 will have enough PAPRs to weather at least the next couple of months. “I don’t think this is going to have long-term repercussions,” she says. “But I guess time will tell.”

All the experts Undark spoke with stressed that the protective equipment needs of health workers, currently battling the pandemic around the world, take precedence. “I would give everything I have over to the hospital if we needed to,” Nichols says.

Yet as the outbreak continues to evolve, the research world will need to keep pace. “There is a national imperative to deal with coronavirus,” says Bryan Bryson, who runs a tuberculosis-focused lab at the Ragon Institute of Massachusetts General Hospital, Massachusetts Institute of Technology, and Harvard University. In this BSL3, there are no N95s to be seen: All personnel wear PAPRs, and the well-funded institution retains a hefty cache of these and other protective equipment. “If we experience a shortage for our lab research that we can theoretically put on hold for a little while,” Bryson says, “then we just put it on hold.”

The current situation, he adds, is a reminder of the “agility required for scientific research.”

Hiccups and hurdles, after all, are a normal part of the scientific process. And equipment deficits certainly aren’t new: Nichols recalls a similar run on masks in the wake of the 2009 H1N1 influenza virus pandemic, which infected about 1 billion people worldwide. Since then, she’s been diligent about stockpiling protective equipment.

But any facilities that face a potential shutdown could take months to recover. West’s projects, especially those that involve animal infections, typically take many months to complete. In addition, grant money is doled out in annual cycles, so there may be a lag before facilities are able to recoup financial support for paused experiments. “If you can’t do this initial work to get preliminary data, you’re not going to be able to put a grant in,” Nichols says. If researchers have grants in process or have a contract with the National Institutes of Health, she added, they may not be eligible for payments.

West has resolved to keep more N95s on hand when supplies bounce back. “I will squirrel away a case or two of each of my N95 masks in a secret hiding hole that would come out in times like this,” she says. But that strategy isn’t foolproof: Respirators expire, and funds are limited. Working for a small facility, she says, “I have a very finite budget. I don’t have the ability to say, ‘I need $10,000 to buy all these masks.’”

Nichols says it’s especially frustrating to see respirators being bought up, price-gouged, and misused. Earlier this month, she encountered a man in a Walmart parking lot who had obliviously strapped on an N95 upside down, with the nose piece hovering over his chin.

Research personnel undergo intensive training to learn how to properly use the masks, which must first be individually fit-tested to ensure a tight, protective seal. Even removing the respirators isn’t trivial, Cherry said. People who fiddle with an N95’s exterior before touching their face can end up moving microbes from mask to skin, obviating the point of wearing the respirator at all—and potentially increasing risk of infection.

As for the public, the only protective equipment that healthy people should don “is called common sense,” Bryson says. The best thing for people, he adds, is “being aware of what their health situation is, and knowing whether or not they’re sick. And knowing whether self-isolation is necessary.”