For comparison, the U.S. Navy commissioned only four warships in all of 2014. 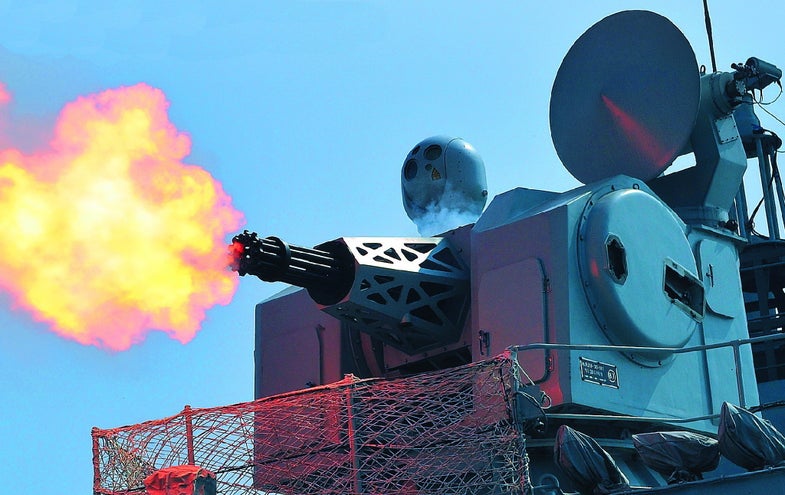 The Type 1130 CIWS, with 11 30mm barrels, is the largest Gatling cannon in the world, firing up to 11,000 rounds a minute (that's nearly 200 rounds a second). Its designers say that it can shoot down 90% of incoming supersonic missiles. But it could be replaced by shipborne railguns, which would protect Chinese warships against future hypersonic threats. =GT at China Defense Forum
SHARE 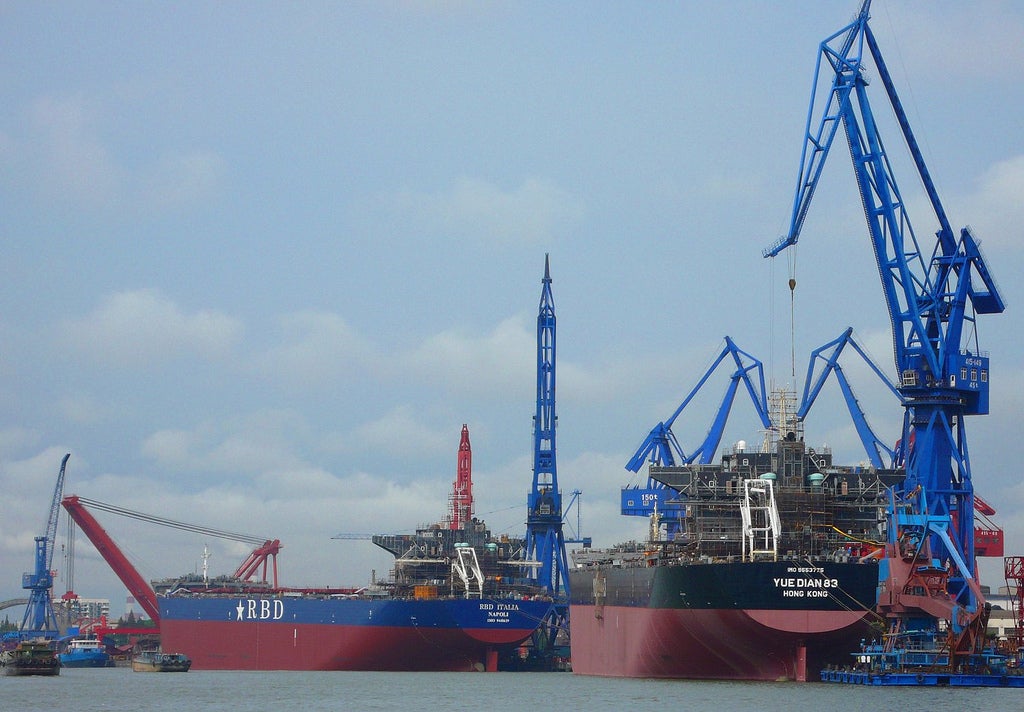 Not since World War II has a single shipyard launched multiple large warships in a single day. But Hudong-Zhonghua Shipyard in Shanghai, one of China’s best naval and civilian shipyards, just did that. On January 22, 2015, it showed off its prowess in military mass production by simultaneously launching a Type 071 Landing Platform Dock (LPD) amphibious warship, a Type 054A frigate, and a Type 815G Electronic Intelligence (ELINT) ship. For comparison, the U.S. Navy commissioned only four warships (including a submarine) in all of 2014. 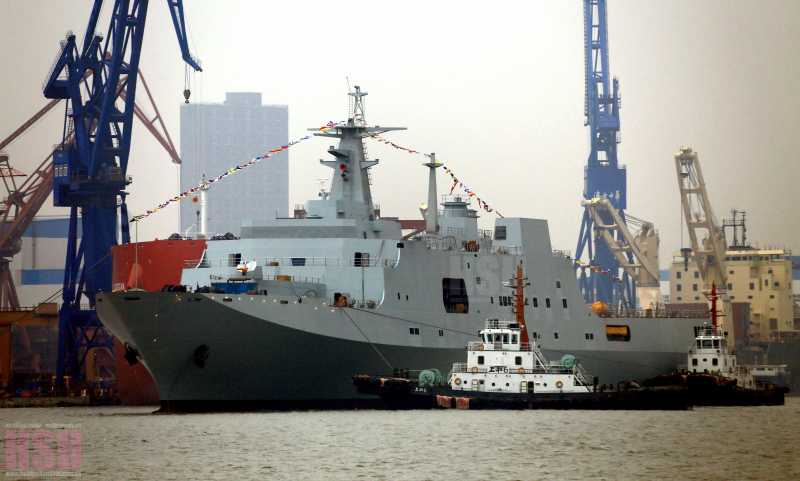 The 20,000 ton Tanggula Shan is China’s fourth Landing Platform Dock, with a built in well deck which allows Chinese Marines to start amphibious assaults out of the range of coastal defense.

The Type 071 LPD, the fourth in the class is named Tanggula Shan and will be followed by at least two more Type 071 LPDs. Displacing between 20,000 and 25,000 tons, it can carry up to four Type 726 hovercrafts, which can transport a combination of 65 vehicles or 800 infantry across 60 km of ocean to shore, as well as six Z-8 transport helicopters. Once all six Type 071s enter service, China will have the second largest offshore amphibious assault capability in the world, after the U.S. Marine Corps. A task-force of Type 071s would provide decisive force to take or hold disputed small islands, or as the tip of the spear for a larger invasion from the sea.

Another Type 054A Frigate

The stealthy Type 054A frigate, 21st in its class, is China’s most modern medium sized surface combatant, with capable air defense and anti-submarine systems. 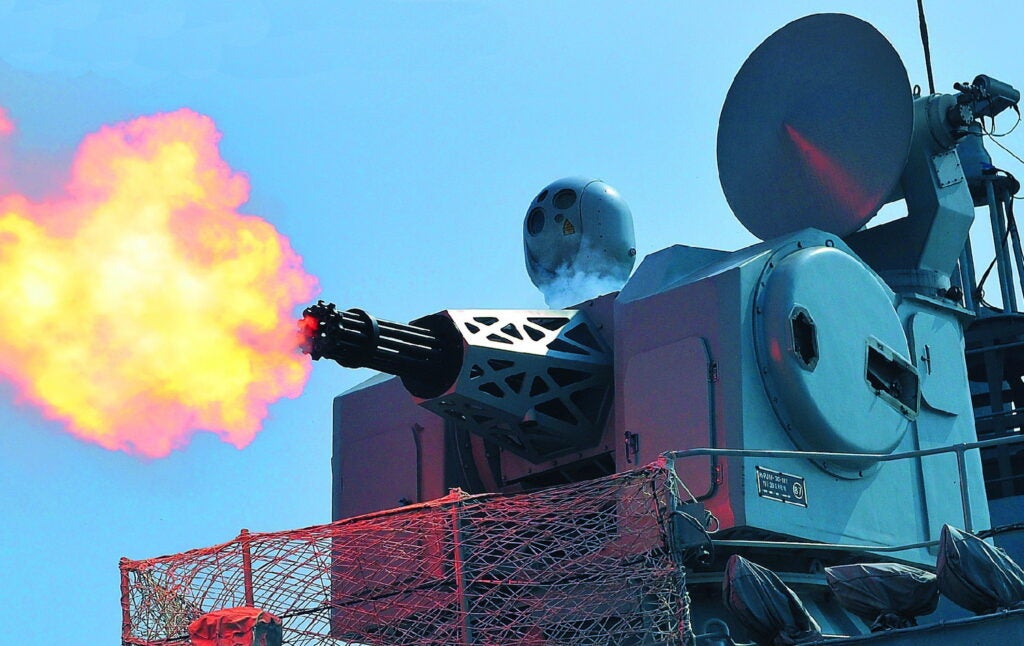 The Type 1130 CIWS, with 11 30mm barrels, is the largest Gatling cannon in the world, firing up to 11,000 rounds a minute (that’s nearly 200 rounds a second). Its designers say that it can shoot down 90% of incoming supersonic missiles. But it could be replaced by shipborne railguns, which would protect Chinese warships against future hypersonic threats.

The 4,500-ton Type 054A frigate, the 21st in the class, has improvements over the previous Type 054A frigates. It carries a variable depth sonar in its rear, to improve its submarine detection capabilities. It also has two Type 1130 Close In Weapons Systems (CIWS), replacing the previous two Type 730 CIWS. The Type 1130 CIWS has eleven 30mm barrels, and can fire up to 11,000 shells a minute. As China will likely face enemy submarines and supersonic anti-ship missiles in the near future near seas, 054A+’s upgrades would increase its chances of survival.

This Type 815G spy ship uses its giant radomes to vacuum in enemy electronic activity and communications, providing China with a way to monitor foreign strategic, naval and air activities both in the near seas and internationally (one even went to Hawaii last summer).

While not directly as lethal as its fellow debutants, the Type 815G ELINT spy ship will still provide a critical role in Chinese naval and joint operations. Of particular note are the two sensor domes on the Type 815G’s superstructure; the large size of those domes indicates high sensitivity to record distant enemy radar emissions, electronic jamming frequencies and communications signals. A Type 0815G spy ship showed up at the multinational RIMPAC 2014 exercise (where China was also a participant). In future cyber/kinetic operations, such as those that the late Air Sea Battle concept envisioned, the Type 815G spy ships will help Chinese commanders prepare and understand the battlefield. 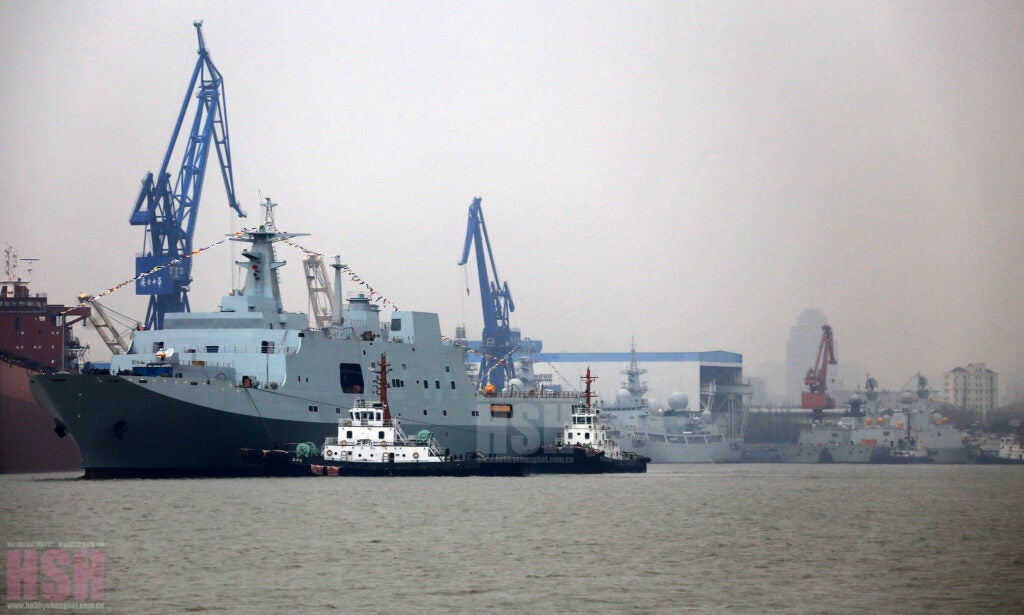 On this fine January 22, 2015 day, you can see three recently launched Chinese warships: the massive Type 071 LPD in front, the Type 815G spy ship somewhat hidden behind it, and the new Type 054A frigate in the background (which orange coverings on its sensor and communications domes above the helicopter hangar).

The three warships of January 22, 2015 will be joined in the following years by other PLAN milestones, such as the Type 055 destroyer, domestically built aircraft carriers and the quiet Type 095 nuclear attack submarine. Modern naval construction techniques like modular building and computer aided design have improved the pace, cost effectiveness and capability of Chinese warships. Amidst sequestration and austerity triggered cutbacks, western navies are struggling to keep naval shipyards in business, China’s success in rapidly launching modern warships is even more stark.

Want to Know What It’s Like to be Blown Up by a Chinese Missile? Ask this Ship.

New Chinese 052D Destroyers, Three in a Row at a Shipyard