It’s taken us quite a few years to learn how to capture audio accurately. 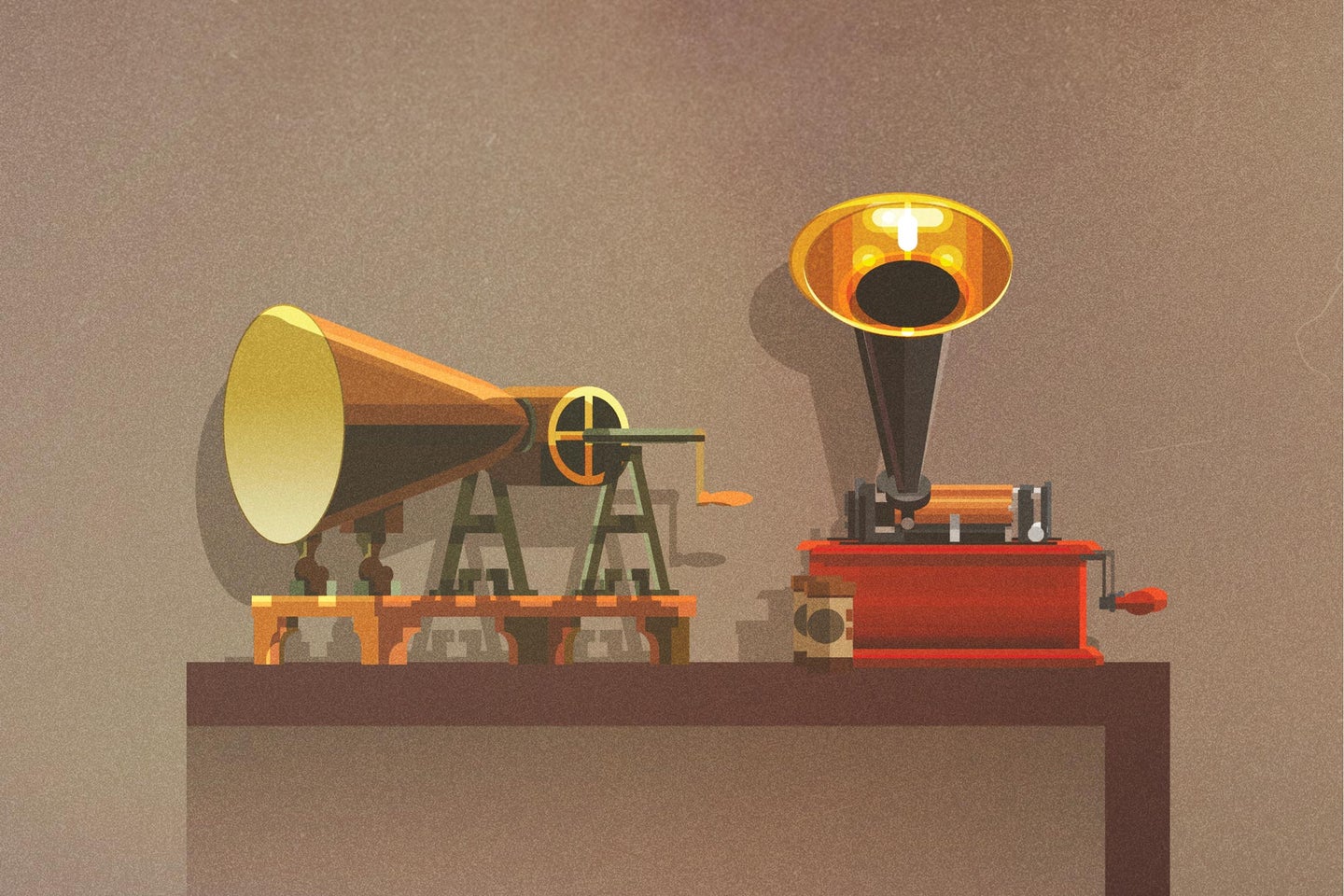 The Phonautograph and the Wax Cylinder were invented in the mid-late 1800s. James Gilleard
SHARE

Making noise is easy, but saving it is hard. Humanity’s first big innovation in file sharing came along around 3,400 years ago, when ancient Mesopotamians ­experimented with a written notation for melodies they’d previously only shared out loud. It wasn’t until the mid-19th century that engineers began to capture the sound waves themselves. The quality of early ­devices was low—poor materials and grimy recording environments could make music turn ghostly. But ­technicians continued to refine their tools; now anyone with a smartphone can save high-­quality audio. Next time you blast your personalized playlist, remember to thank these musty old machines.

In 1853, Édouard-Léon Scott de Martinville invented the phon­auto­graph and made the likely first copy of a human voice seven years later. The device’s stylus preserved sound waves by etching their movement into smoke-​­darkened glass, but Scott never managed to create a machine that could play back the results. No one would hear his snippet of “Au Clair de la Lune” until 2012.

Thomas Edison invented a replay-​capable phonograph in 1877, but it took Alexander Graham Bell nine years to turn that concept into the commercially available Graphophone. Audio entered a horn and vibrated a diaphragm, which pushed a stylus into wax to cut grooves. To produce the tones, the needle ­followed the transcription and pushed audio back through.

We’ve mastered recording audio, but storage has room to improve. In 1993, Germany’s Fraunhofer Institute published the first MPEG audio standards. This format’s lossy compression algorithm shrinks a file by 90 percent without a drastic drop in sound quality. More-recent versions avoid loss entirely, but engineers are working to make the tech cheaper, easier, and faster to use.

Philips and Sony both created versions of the CD, which hit stores in 1982. Technicians would place a glass master disc under a laser that spun according to a digitized audio signal—a mathe­mati­cally simplified version of sound. The short wavelength was great for writing small, allowing lots of data in a confined space. By the mid-1990s, any ­computer could burn CDs.

German engineer Fritz Pfleumer created magnetic tape—the pre­cursor to cassettes—in 1928. As a strip of film coated in iron oxide ran through an electromagnetic field, incoming sounds would alter the arrangement of particles and leave behind a magnetized signature. The device could just as easily convert these recordings back into an electrical signal and play the tape aloud.