Fortnite just kicked off a massive battle against Google and Apple

You can't download one of the world's most popular games to your phone right now thanks to a raging legal battle. 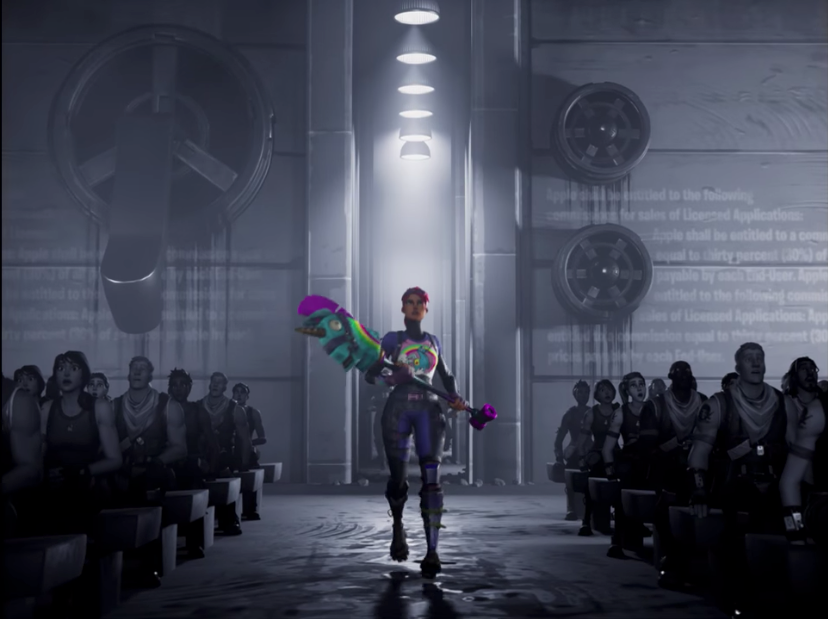 Until this week, if you wanted to play Epic’s massively popular battle royale game, Fortnite, you could hop into the Apple App Store or Google Play store, download it, and bask in the cartoony mayhem that has earned it more than tens of millions of active players every month. That’s no longer the case—at least for the moment. One of the world’s most popular games disappeared from the most popular app stores and it all started with a sale.

Epic typically charges $9.99 for a grip of V-bucks, the game’s in-world currency, which players can use to buy aesthetic upgrades to their characters or dances. V-bucks can also buy Battle Pass subscriptions, which grant them extra XP and the chance to unlock game items. Last week, the company dropped the price to just $7.99 if you bought the currency straight through Epic’s systems rather than going through the App Store. That’s a great deal for players, but a bum deal for Apple and Google, which take a cut of in-app purchases made on their platforms.

Apple quickly banned Fortnite from the store—new players can’t download the software, but those who already have it installed can still continue playing. Epic quickly responded to the banning with a highly-polished parody of Apple’s Orwell-themed commercial from 1984. It was clear that Epic knew what would happen and it was ready for the backlash. Google soon also banned Fortnite from its Play Store as well, though players can still download the game from the Samsung app store, or directly through Epic if they want to play.

it’s a smart time for Epic to strike. Just this month, CEOs from Apple, Amazon, Google, and Facebook appeared (virtually) in front of a Congressional committee to delve into whether or not the companies have participated in anti-competitive practices to try and stifle other start-ups that could hurt their bottom lines. The hearing was scattered—at best—but it capped off a year-long investigation into the companies’ possible monopolistic behaviors.

It’s not a new conversation—it goes back well into the Steve Jobs days at Apple. Amazon was famously forbidden to sell books directly through the Kindle app on the iPhone. You still can’t actually buy a book to read in the iPhone’s Kindle app unless you open a web browser and use the mobile site. Fortnite’s situation is different in that you could buy the V-Bucks, through the App Store, but then Apple would get a cut of the sale.

You will be able to play Game Pass Ultimate on Android phones, but even that isn’t simple. You won’t be able to buy downloadable content if you go through the Android Play Store, but you will be able to if you go to the Samsung store. It’s complicated, and it’s likely only going to get more complicated as apps increasingly act as portals to bigger digital worlds and experiences. The simplicity of the $0.99 fart sound app seems so quaint by comparison.

For Google, Fortnite’s departure shouldn’t feel all that unfamiliar. Epic pulled the title back in 2018 and it only returned earlier this year.

Epic is currently suing both Google and Apple to challenge their policies, so it’s likely this battle will go on for quite some time. Epic is uniquely massive in its reach, which could put considerable pressure on both Google and Apple to flex on their policies. Apple has held a firm line on its policies, however. During this month’s Congressional hearing, Tim Cook reiterated the fact that the policy has been the same since the start and applies equally to every creator on the platform—at least in theory.

For now, if you want to play Fortnite, you can still play it on PC, Xbox, Playstation, Nintendo Switch, and Android if you don’t mind going through other channels outside the Google Play store.