At the New York Auto Show, a Street-Legal Airplane Steals the Spotlight 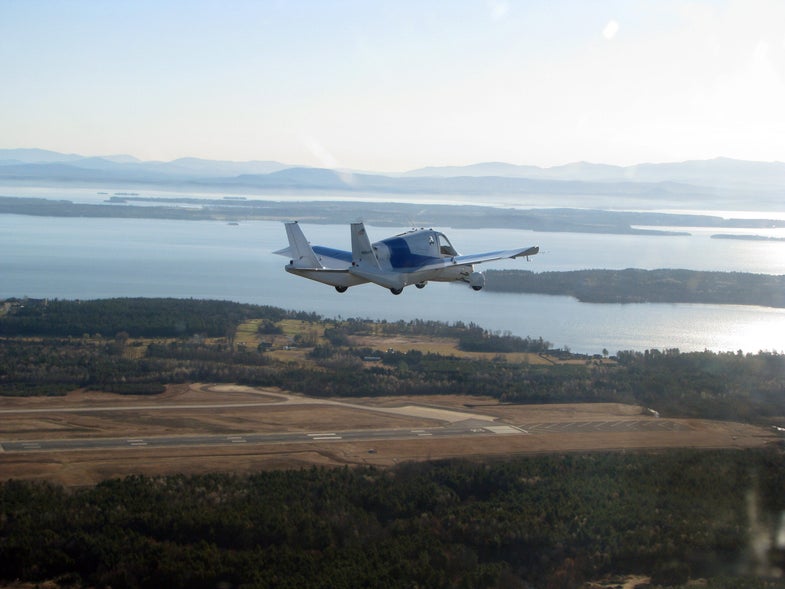 The biggest attraction at this year’s New York International Auto Show isn’t an automobile at all. Technically, it’s a “roadable aircraft.” Sometimes it’s called a street-legal airplane. Whatever you call it, Terrafugia’s Transition is a vehicle that lives in between strict definitions. And at an otherwise unremarkable showcase of the latest model year automobiles and newest concept cars, the Transition is the star of the show.

When PopSci last took an in-depth look at the Transition, Terrafugia was in its infancy and its first proof-of-concept vehicle was still awaiting its first flight. The vehicle’s future was anything but certain. It looked a bit awkward, with a huge canard wing built into the nose of the plane, doubling as a front bumper. It was also, at the time, estimated to cost the consumer roughly $200,000.

Since then, the price has gone up (roughly 100 individuals have dropped $10,000 deposits on the $279,000 vehicles, which are slated to begin shipping next year). That awkward canard wing in the nose has disappeared. But the chief difference is the most important one. The Transition sitting on display at the New York International Auto Show is both a real airplane and a real car, and people are starting to recognize it as such.

“The proof of concept did what it needed to do, but it was rough,” Terrafugia’s COO Anna Mracek Dietrich says. “A polished, production- and customer-ready vehicle it was not.” Then, nodding toward the vehicle on display–the same vehicle that just completed its successful first flight on March 23–she adds “this is real now.” 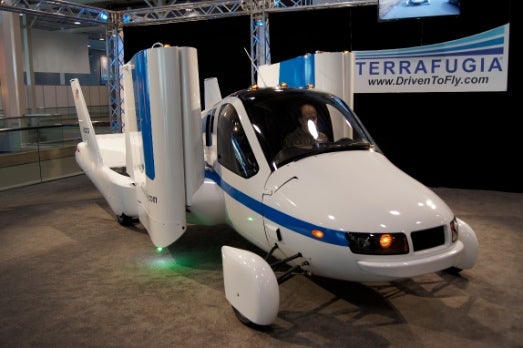 Making it real wasn’t easy. Conjuring a vehicle that lives in two worlds, both as a street-legal automobile and as an Federal Aviation Administration-certified light sport aircraft practically invites red tape. Terrafugia’s engineers constantly served two masters who were sometimes at odds with each other: the FAA and the National Highway Transportation Safety Administration, whose blessing was needed to declare the Transition street legal.

Satisfying them both provided some vexing engineering challenges, but it also made the Transition into the auto-aircraft hybrid it is today. It both drives and flies burning unleaded auto fuel straight from a conventional gas pump. It’s the only aircraft we can think of with retractable side-mounted rear-view mirrors and a rear-mounted camera that feeds to a screen in the cab/cockpit (to assist in backing up). And the safety cage, constructed of carbon fiber box beams, is the lightest on any vehicle certified for the road.

But perhaps the most interesting development in the Transition’s story isn’t how it went from a rough prototype to the New York International Auto Show in just three years, but that the aircraft is here at all. The Transition, Dietrich says, is an airplane first and always has been. The company has been showing off its prototypes at aviation shows like AirVenture in OshKosh, Wis., for a few years now. Its very presence at one of the major car shows signals a shift in focus for Terrafugia, and perhaps a slight change in identity for the Transition as well.

“We’ve always focused the design on the fact that it’s an airplane first, and that’s still the case,” Dietrich says. “But there’s a huge potential here for people that normally wouldn’t be exposed to aviation to take an interest in this. Getting a pilot’s license isn’t nearly undertaking that it used to be for these simple, easy-to-fly little light sport aircraft. You can take two weeks off of work and come back a pilot.”

Dietrich says that in examining the customers who have already put down deposits on the first hundred Transitions the company identified a wide range of people interested for a wide range of reasons. Some see it as a recreational vehicle. Others–ranging from real estate developers who desire a birds-eye view of the terrain below to farmers or ranchers who simply need a quick and easy way to cover a lot of ground in a given day–view it as a practical means of transportation given their daily routines and needs.

More to the point: some of them aren’t even pilots yet. The FAA’s light sport aircraft (LSA) certification requires just 20 hours of flight training for aspiring pilots who wish to fly aircraft like the Transition that are of minimal size and speed and that only operate in favorable conditions. The barrier to entry for piloting something like the Transition is low–low enough that some customers appear to be getting their LSA certifications purely because they see a benefit in the versatility the Transition offers.

So now, with its regulatory approvals in order and a successful first flight under its belt, here sits the Transition in an exhibit hall otherwise packed with the world’s most cutting edge automobiles, to the last one designed to keep all four tires firmly on the pavement. Terrafugia still has months of envelope testing, stress trials, and a gamut of other performance evaluations ahead of it, all designed to expose the Transitions flaws. But if the crowds at the New York International Auto Show are any indication, this idea that looked so uncertain just three short years ago might just fly after all.