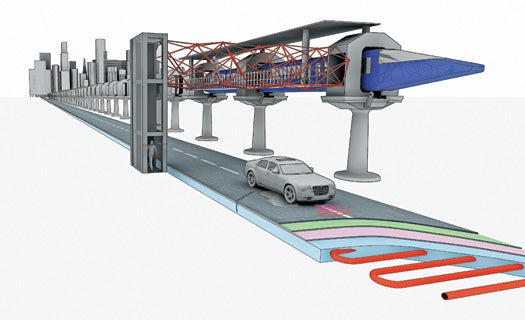 Chicago road crews are scrambling to fill 67,000 potholes a month. Communities in Pennsylvania rely on 100-year-old water pipes made of wood. Squirrels still cause widespread blackouts. The country’s 600,000 bridges, four million miles of roads, and 30,000 wastewater plants desperately need attention. The solution isn’t patches, it’s an overhaul. Soon roads and power lines will fix themselves, and we’ll mine energy from sewage. America’s 21st-century tune-up won’t happen overnight, but we could start reaping the benefits (faster broadband! cleaner water!) within the next few years.

Task: Fix the third of major roads that are in poor shape
Status: Three years to a prototype

In a new system developed at Northeastern University, vehicles that cover lots of asphalt—taxis, buses, garbage trucks—will be outfitted with acoustic wave sensors to detect potholes before the human eye can see them. Sound waves probe the top three feet of the road for telltale air pockets and small cracks, while ground-penetrating radar looks inside bridge decks for corrosion and lasers scan the road surface. A cellular data connection sends data to control centers, where it can be assembled into maps of trouble spots.

Roads that De-Ice Themselves

Task: Reduce the 1,300 road deaths a year from snowy and icy winter conditions
Status: In testing by more than 20 state departments of transportation

A new road coating called SafeLane not only gives tires more traction, it actually helps prevent the accumulation of ice and snow by holding on to de-icing salts, allowing road crews to scatter salt a couple of days before a blizzard rather than waiting until the snow is already on the ground. SafeLane consists of layers of epoxy mixed with dolomitic limestone. The epoxy layer is snowplow-proof, lasts up to 15 years, and helps seal the pavement to keep corrosive salts from leaching down to steel bars in sensitive bridge decks. Anecdotal results from its first five years in the field show up to a 70 percent decrease in winter accidents.

Bridges that Flex on the Fly

Regular bridges are fairly rigid structures that break down over time from stress. “Tensegrity” structures disperse load over a nest of tensed cables and compressed struts that allow them to be both flexible and structurally rigid. Now the University of California at San Diego is developing traffic-bearing tensegrity bridges with feedback sensors to guide subtle adjustments in cable length, which could alleviate the shifting stresses of an overladen truck, counteract the vibration frequency of an earthquake, or disperse the load of a severed cable.

Concrete that Senses Cracks and Heals on its Own

Carbon nanotubes are prized for both their strength and their piezoresistance—they change their electrical resistance as they’re stressed. Xun Yu, a mechanical-engineering professor at the University of Minnesota–Duluth, is cooking up a concrete mix that contains 0.1 percent carbon nanotubes, making it harder to crack than traditional concrete, and smart too. By embedding electrodes into it as it sets, Yu can measure changes in electrical resistance to detect compression from passing cars. Future versions will better calculate speed and vehicle weight on the go for a real-time view of the road’s stress. Meanwhile, a new concrete mix developed by Victor Li, a professor of civil and environmental engineering at the University of Michigan, contains unhydrated cement grains that are activated when exposed to carbon dioxide in air and water from rain—exactly what you’d find in a small crack in the road. The reaction produces a calcium carbonate seal, restoring the slab to its normal load-bearing capacity.

To save the multibillion-dollar cost of clearing 24-foot-wide swaths for new track, trainmaker Tubular Rail wants to shoot trains up to 150 mph over existing infrastructure through a series of elevated rings 100 feet apart. As it passes through each ring, the 400-foot-long carbon-fiber car is pushed along by electrically powered steel rollers. To save juice, the motors gear up only as a train approaches; up to 90 percent of the kinetic energy of the train can be recaptured as the rollers wind down.