Our talk with Kimberly Bryant, CEO of Black Girls Code 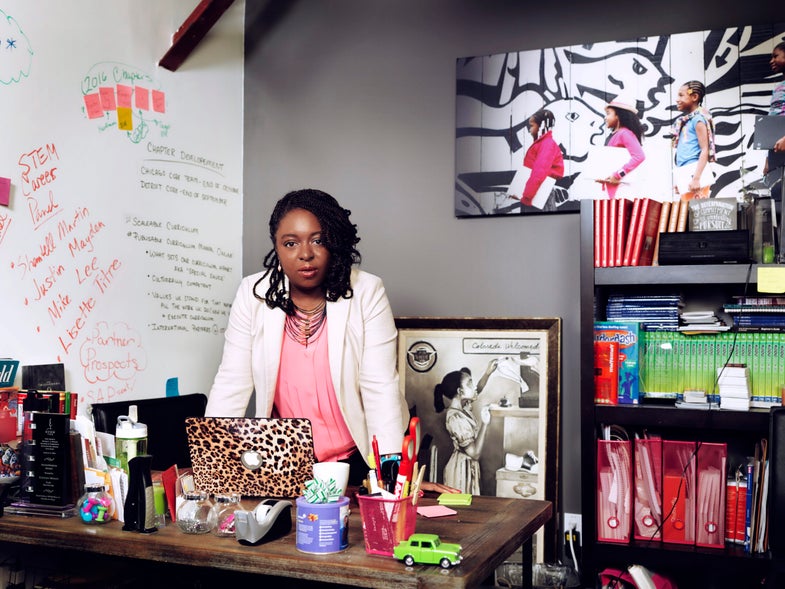 “You can absolutely be what you can’t see! That’s what innovators and disruptors do,” Kimberly Bryant tells me, dismantling the clichéd quote about role models for the underrepresented in STEM (science, technology, engineering, and math). Lack of role models didn’t stop Bryant from founding Black Girls Code, a non-profit working on adding a few more shades to Silicon Valley’s color palette. The company, founded in 2011, is dedicated to teaching girls K-12 how to code, and has grown to be 6,000 students strong. With chapters in San Francisco, New York, and even Johannesburg, South Africa, Kimberly Bryant is helping give the tech industry a much-needed diversity upgrade.

I mention that Neil deGrasse Tyson agrees—if he’d waited for a black man from the Bronx to become an astrophysicist, he wouldn’t have pursued the field. Bryant acknowledges how difficult it can be to make your own road without having anyone who’s walked a similar pathway previously. But she also points out the different levels to the pedestal we place role models on. “Tyson surely didn’t have any direct role models, but as a man he still had other men in his field doing what he wanted.”

Bryant spent 20 years working in tech and engineering at places like Westinghouse, Pfizer and Genentech before making the switch to non-profit work. The idea for Black Girls Code first emerged not during her work in the tech industry, but after enrolling her then 12-year-old daughter, Kai, in summer classes. The Stanford summer program offered a course in game design, but something stood out to Bryant. “It was a great class, but the classroom had very few girls and even fewer people of color—just her.”

With this in mind Black Girls Code was formed. The program’s curriculum focuses on HTML, CSS, Java, Javascript and Python. “Also proprietary languages associated with robotics—which are some of our most popular classes,” Kimberly Bryant tells me. “We’re also looking into adding Ruby and Swift.”

Having had its first class in 2012, Black Girls Code is a little more than four years old. Meaning students haven’t quite yet gone on to be the next Bill Gates. But many have chosen to continue their coding education through programs like Game Heads and Make School. Bryant’s goal is to have educated a million girls by 2040.

Bryant reiterates what many in the industry have already discussed at length: the importance of inclusion, if only to make an a better end product. “Technology can be biased in how it’s developed if coders aren’t careful. There are apps that are clearly made by companies with no people of color on their team.” Bryant specifically calls out neighborhood safety apps like NextDoor where users exhibit bias—subconsciously or otherwise. “The product itself isn’t necessarily inherently biased,” notes Bryant. “But there are no built-in anti-bias tools in it. If women or people of color were included at the creation table, these issues would be noticed.”

Hiring inclusively goes beyond hiring black and Hispanic employees at the entry level only, says Bryant. “It’s not just hiring, but also including people of color and women on all levels: as middle managers, in leadership positions, even as founders.” It’s also important not to tack on diversity, but to embed it early into a company, even with employees number one through 50. “If we aren’t seated at the table,” says Bryant, “the product, policies, and whole strategy has the potential to come from a narrow lens.” She notes Slack and Pinterest as examples of companies that do it right.

Black Girls Code has 13 chapters—five of which opened up just in 2016, which is just as notable as the company’s newest New York home base. In July, the chapter moved into a 6,000-square-foot space on 9th Avenue—the building Google not only resides in, but owns. The search company presented the non-profit the $2.8 million space as a gift.

Bryant says there’s a lack of a pipeline for STEM study—particularly in U.S. schools in urban areas with high populations of Hispanic or African-American students.

“Not being properly prepped for learning these fields during K-12 puts them at a disadvantage when they reach college,” says Bryant. “If you do go into engineering in college, you’ve never seen code, and you have to learn Java. Not to mention impostor syndrome.” Imposter syndrome refers to a condition in which a successful person, belonging to a field where they’re underrepresented, feels like a fraud waiting to be exposed, despite previous accomplishments.

“So we’re losing girls all along the pipeline,” continues Bryant. “Losing them before they graduate high school, losing them the first couple of years of college, and absolutely losing the ones left who aren’t even offered jobs.”

But the Black Girls Code founder believes conducting classes from within Google will help fix the pipeline. Seeking mentors for coding help or tech industry advice would only be an elevator ride away. While the search company, like many, still struggles with diversity, women and people of color can be found sprinkled throughout. Which is part of the reason Black Girls Code and Kimberly Bryant chose to reside in the building. So even if Bryant doesn’t require her students have role models, they may get one or two anyway.

Another version of this article was originally published in the September/October 2016 issue of Popular Science.