The most exciting aerospace innovations of 2018 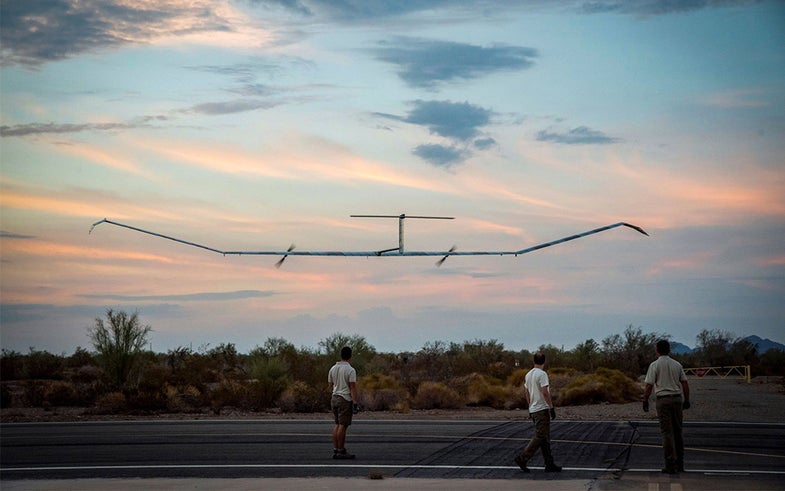 A record-breaking solar-powered plane
Airbus's Zephyr S HAPS set an all-time record on August 5, 2018, staying aloft for more than 25 days. The flight, staged in Arizona, went to 70,000 feet, comfortably above other aircraft and most clouds. Despite its 82-foot wingspan, the solar-powered UAV weighs just 165 pounds, which—along with a power-management system that focuses on maintaining battery temperatures to ensure optimal charge and discharge rates—helped it consume less overall energy. It maintained its elevation all through the night, a feat that other sun-powered planes still can't achieve. Zephyr Airbus
SHARE

Let’s not waste any time: There’s a jet suit in this year’s Best of What’s New list, yet somehow that’s not even what we dubbed the Innovation of the Year. That honor goes to a NASA probe that is, put simply, the fastest thing ever made by humans. Its destination? A little place known as the sun. There’s no doubting the sheer epicness of this year’s top Aerospace innovations; even the more-practical offerings—a floating virtual assistant for the ISS or an extra-safe helicopter—are so awesome you’ll find yourself casually bringing them up on your next first date or company holiday party. Everybody understands how cool space is. 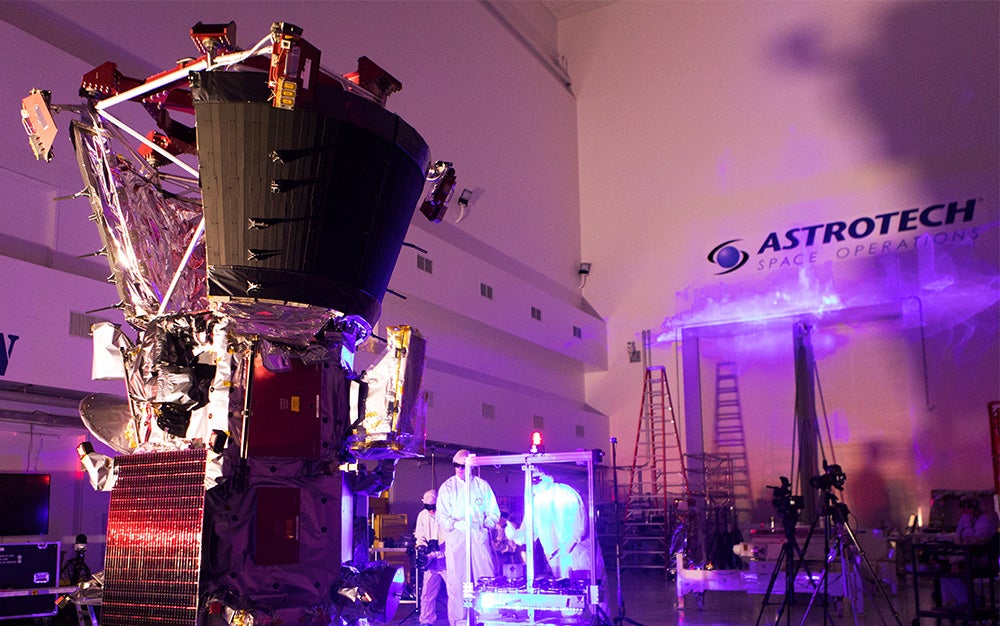 Innovation of the Year Fastest spacecraft ever
NASA’s Parker Solar Probe is officially the fastest thing ever made by humans, reaching a top speed of 430,000 miles per hour as it makes its 7-year mission in the sun’s outer corona. The probe, which launched in August, will orbit our star, getting closer than any spacecraft ever has before. Despite encountering temperatures north of 2,500 degrees Fahrenheit, most of the probe’s four sensitive instrument suites will remain a cool 85 degrees. This is thanks to an eight-foot-wide, 160-pound heat shield made of carbon foam 4.5 inches thick and coated with a layer of superheated carbon. The foam is so light that, here on Earth, 97 percent of the mass was occupied by air—that doesn’t leave much solid matter for the Sun to heat, keeping the craft cool. 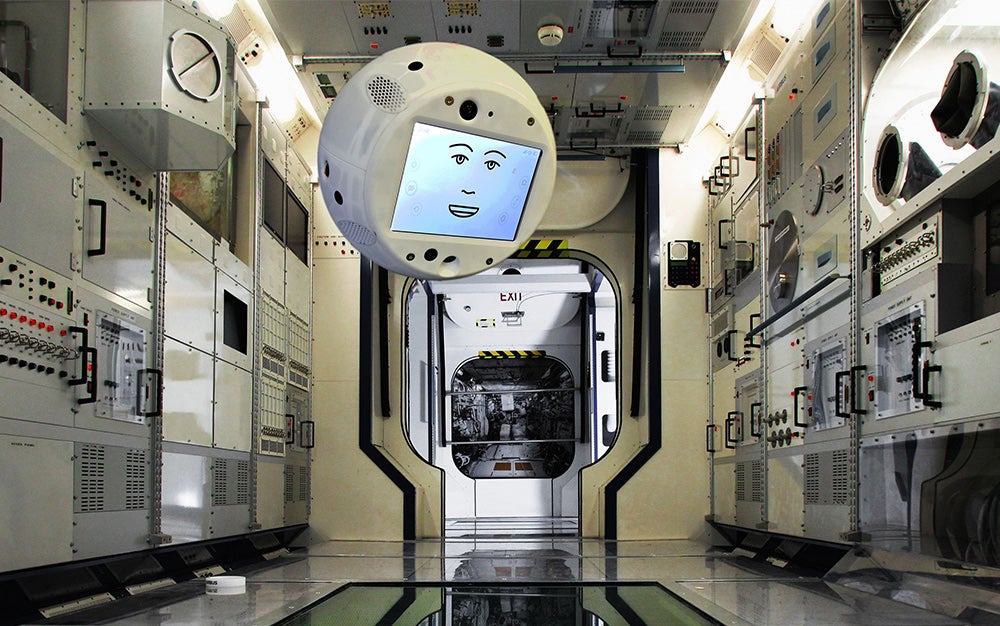 Floating AI Astronaut Assistant
On Earth, CIMON weighs 11 pounds and is a bit bigger than a basketball. In low-Earth orbit, the robot, powered by IBM’s Watson natural-language artificial intelligence, is designed to act like a space-bound personal assistant. It’s similar to Siri or Alexa, but equipped with knowledge that can help astronauts make repairs to the ISS, run the many experiments sent into space, or even talk the crew through basic medical procedures. It headed to the ISS this summer as a free-floating assistant, able to fly around the station on command with the help of 14 specialized fans. In mid-November, German astronaut Alexander Gerst successfully walked the floating assistant through its first camera-toting, voice-activated, rubix-cube-solving paces. 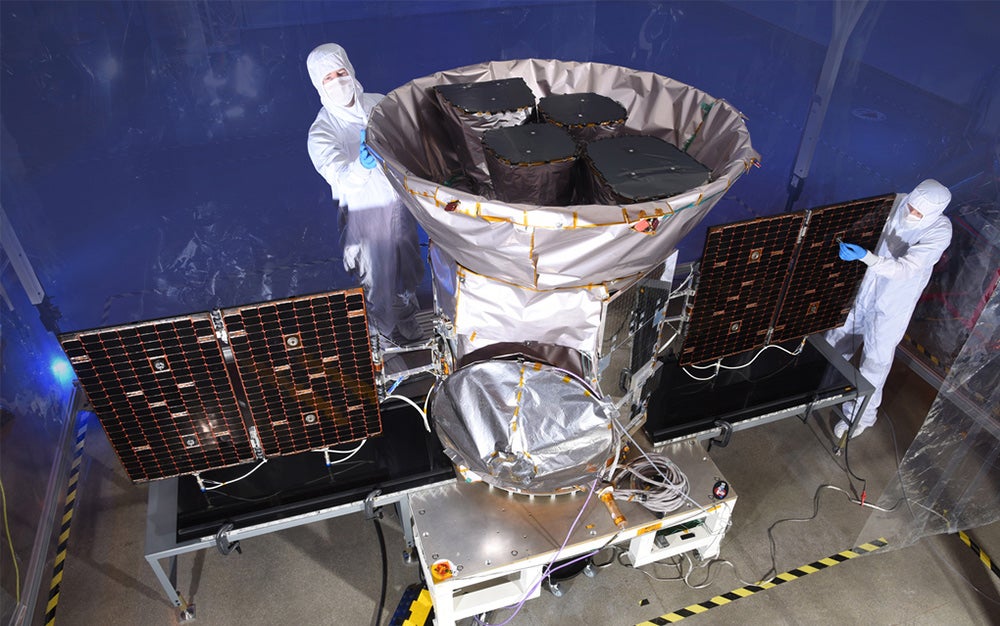 An all-sky exoplanet hunter up in space
Over the next two years, NASA’s TESS will monitor about 200,000 nearby stars for evidence of orbiting exoplanets. TESS is expected to find thousands of new planets, which will give astronomers a better understanding of how worlds like our own form—and how common watery, temperate, life-filled orbs like Earth might be. Compared to its predecessor, Kepler, TESS will search an area of the sky 400 times larger, and for less than half the price: just $337 million. 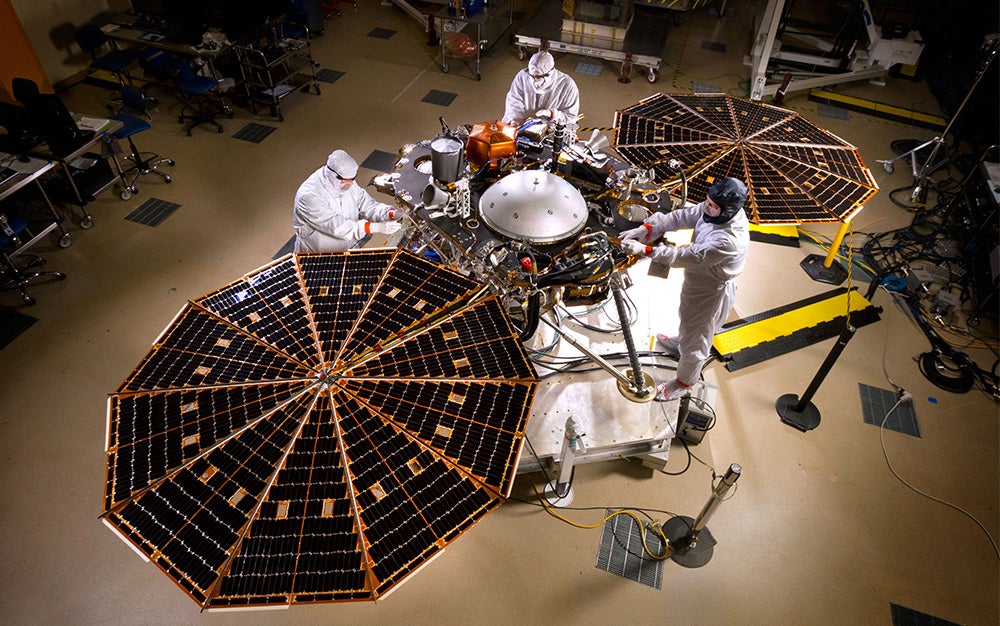 Mission to look inside mars
Yesterday, on November 26, a 1,340-pound parcel hurtled through the Martian atmosphere at 12,300 miles per hour. About six minutes later, when the InSight rover landed, it started the slow and careful process of setting up a fleet of scientific instruments, including a probe designed to burrow 16 feet into the planet to take its temperature. Unlike space and surface-based rovers and orbiters, InSight will give us our first good readings of Mars’s insides. Its ability to track the flow of heat from the interior of the planet toward the surface will help figure out where Mars’s volcanoes came from, and the rover’s seismometer will even measure Marsquakes and meteorite impacts. 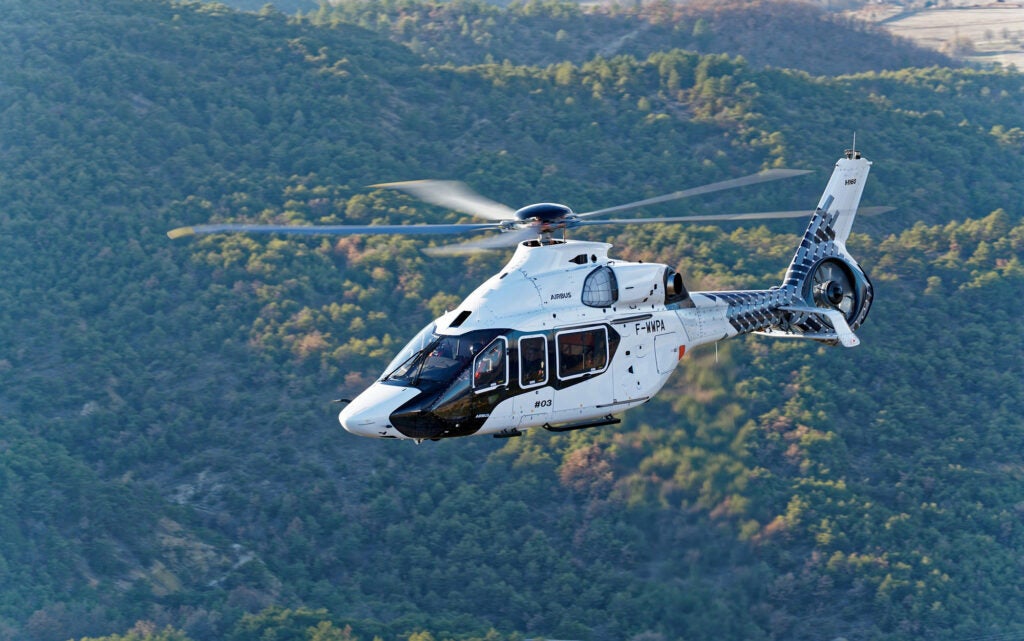 Safest helicopter on the market
There isn’t much peril a helicopter pilot can get into (dangerous proximity to power lines, an unexpected gust of wind) that an Airbus H160 can’t also get them out of. The versatile helo—configurable for rugged search-and-rescue missions, VIP transport, or ferrying up to 12 passengers like oil-rig crews—uses a novel two-level rear horizontal stabilizer to minimize downdraft vibration from the main rotor, thereby improving low-speed stability, and an always-on autopilot to ensure that even the greatest airborne surprises don’t become disasters. If the pilot becomes disoriented or the craft gets tossed on its side, double tapping a single red button on the stick will automatically return it to straight and level flight. 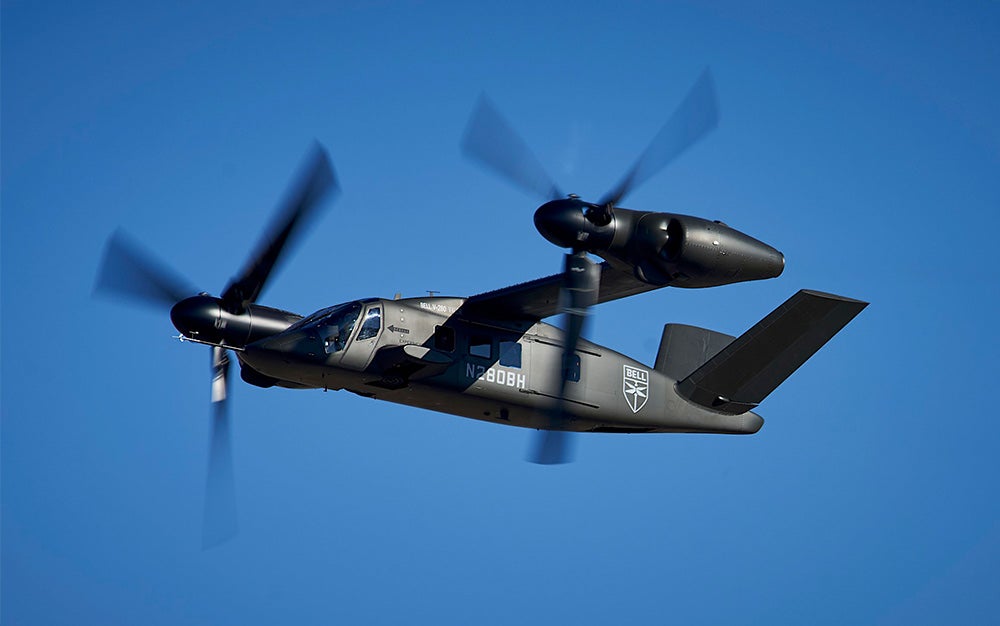 Faster than a helicopter, nimbler than an airplane
The V-280 Valor can fly faster and farther than a helicopter, reaching a top speed of more than 320 miles per hour—a whole lot faster than the venerable Black Hawk’s maximum of 183. This is a new tiltrotor aircraft, meaning its propellers can pivot from horizontal to vertical, allowing it to takeoff and land vertically while still retaining the speed advantages of wings and forward-facing props. The V-280 prototype achieved first flight in December 2017, and it promises to be a smaller, lighter, and more nimble version of the V-22 Osprey tiltrotor. It’ll also be easier to fly, and less damaging to landing and takeoff surfaces: Only the Valor’s rotors will tilt skyward, not the entire engine. This protects surfaces from intense heat, and reduces the dust that can obscure a pilot’s vision. 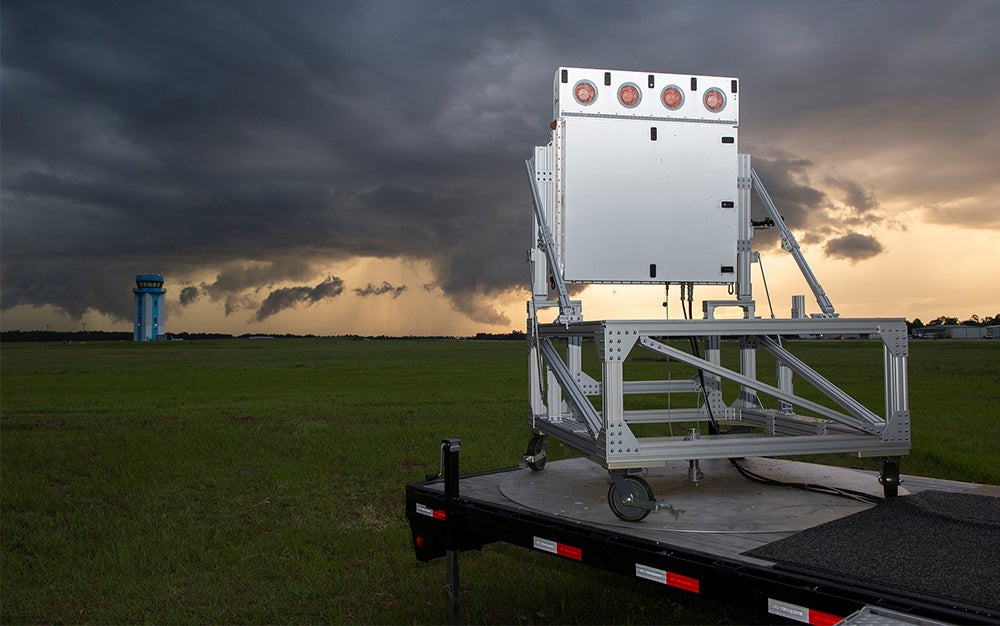 Eliminating ‘under-the-radar’
For such far-out drone missions as, say, autonomous cheeseburger delivery to become reality, we’ll have to track the small, low-flying vehicles in the sky. Conventional radar coverage peters out if you dip much below 3,200 feet, which is where Raytheon’s new Low Power Radar (also known as Skyler) comes in. The compact unit—less than one-meter-square—scans for objects using a radar system similar to those used in modern fighter jets. Networks of these devices set up on cell towers, buildings, and hills will be far cheaper than the large, moving radar dishes that now scan our airspace. 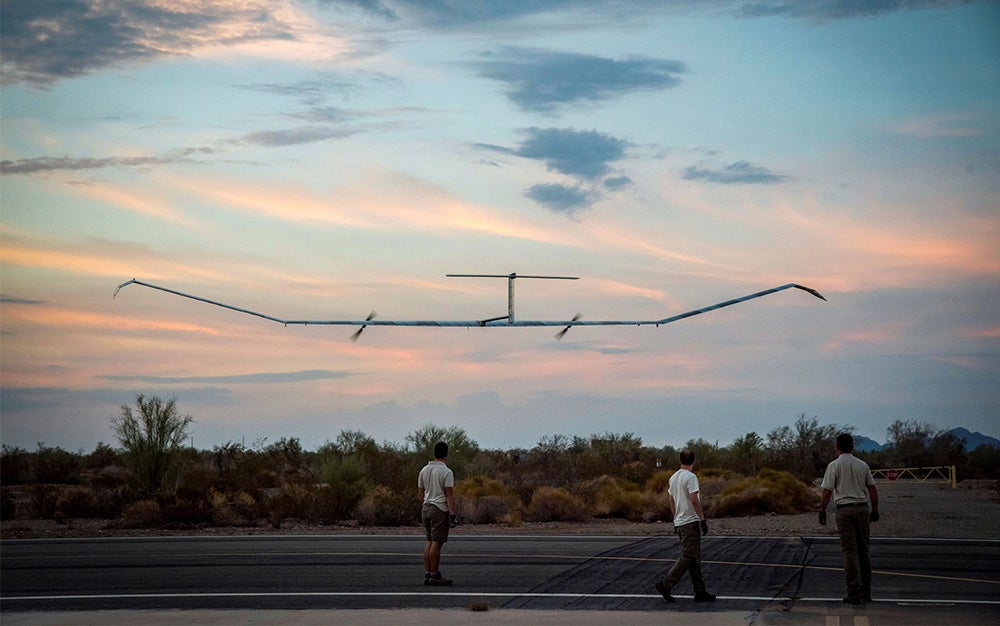 A record-breaking solar-powered plane
Airbus’s Zephyr S HAPS set an all-time record on August 5, 2018, staying aloft for more than 25 days. The flight, staged in Arizona, went to 70,000 feet, comfortably above other aircraft and most clouds. Despite its 82-foot wingspan, the solar-powered UAV weighs just 165 pounds, which—along with a power-management system that focuses on maintaining battery temperatures to ensure optimal charge and discharge rates—helped it consume less overall energy. It maintained its elevation all through the night, a feat that other sun-powered planes still can’t achieve. 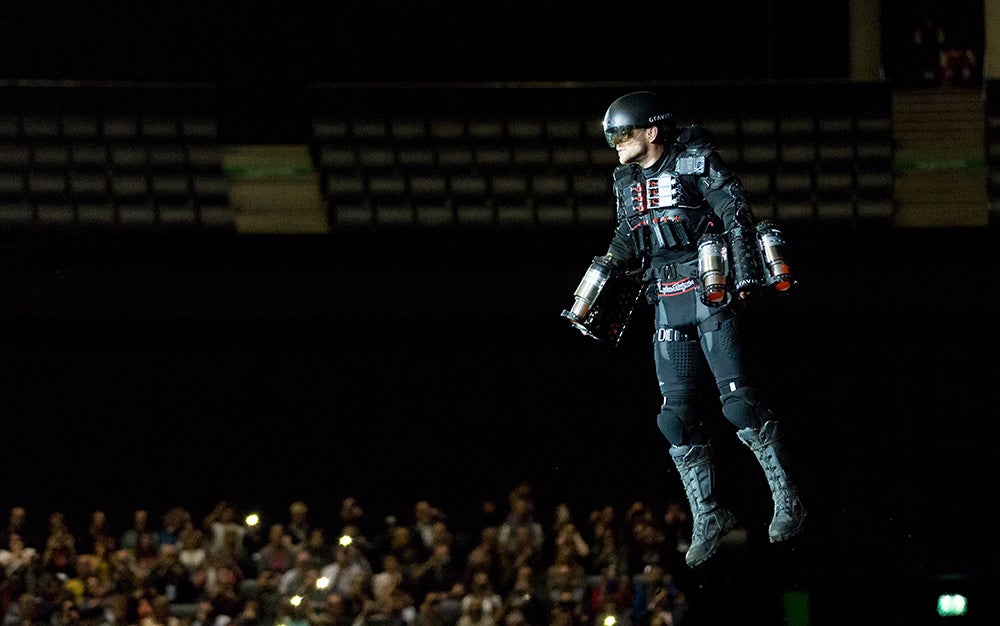 A Tony Stark-style jet suit
Jetpacks have come and gone over the years, usually stymied by short flight times and the sheer danger of strapping jet engines to the human body. With a design closer to Iron Man’s suit than Flash Gordon’s pack, Gravity uses a trio of precisely controllable kerosene-powered microturbines—two of the breadloaf-sized engines on each hand and one on the back—to generate a stable “tripod” of thrust totaling 1,000 horsepower. The suit carries enough fuel to fly for up to 8 minutes.
Aviation
Best of What's New
Space