Solar panels on cars make more sense than a decade ago. 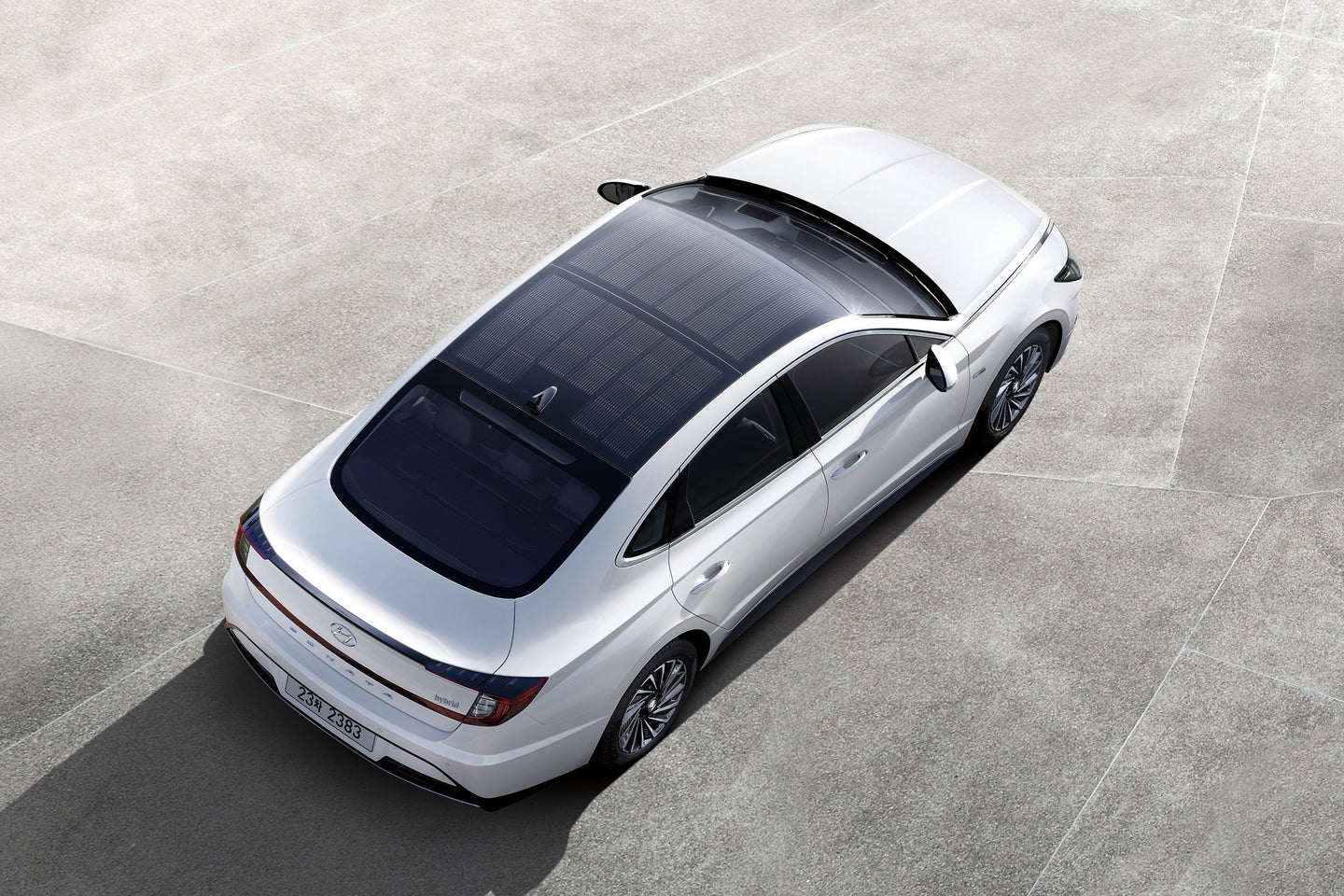 The new hybrid Hyundai Sonata isn’t available yet in the United States, but it offers something compelling enough to make headlines here—a solar panel on its roof. While the panel can’t produce nearly enough juice to give the car’s battery all it needs for regular travel, it does occupy what the company calls a “supporting role” for the vehicle.

Hyundai notes that the solar cells could provide a boost of about 808 miles annually. In other words, if you drove this car every day for a year, you’d be getting about 2.2 miles of daily travel from the sun, on average. Unlike with plug-in charging or previous attempts at cars with photovoltaics, the solar system shunts power to the Sonata’s battery even when you’re driving.

And in October of last year, Hyundai announced that they have been working on different types of solar cells for cars, one of which is designed to juice the battery of a car with an internal-combustion engine, “thereby improving fuel efficiency,” they argue.

Hyundai follows Toyota down the solar-panels-on-a-car road; the Japanese carmaker first offered a Prius with a solar roof around a decade ago, but in 2009, the MIT Technology Review referred to it as “underwhelming.” That’s because the solar energy didn’t power the battery that drove the vehicle’s propulsion system, but just “ran a fan to ventilate the car,” they note.

Things got better in 2017, when Toyota started offering the Prius PHV with an optional solar roof in Japan. That solar system charges the main battery only when the car is parked, and can add, on average, 1.8 miles to the car’s driving distance each day, with a max of around 3.8 miles. Solar power can’t charge that main battery—called the traction battery—while the car is being driven, however. During that time, the power goes into the 12-volt auxiliary battery, which gives juice to car systems like the radio.

But earlier this summer, Toyota announced something even better: a blue and white demonstration vehicle with solar cells on the hood, roof, and rear that (unlike the Prius PHV production car in Japan) could charge the main battery while the vehicle is in motion. Not only that, but the solar cells are more efficient (clocking in at 34 percent efficiency or more for the demonstration car, compared to 22.5 percent for the Prius PHV) and they produce nearly five times as much wattage. In short, this demonstrator vehicle offers a more capable solar system than the production car. “The trials aim to assess the effectiveness of improvements in cruising range and fuel efficiency of electrified vehicles equipped with high-efficiency solar batteries,” Toyota said in its announcement.

Carmakers and others have much more affordable and more powerful solar panels to work with now than they did around ten or so years ago. “In the last decade, the prices of solar panels have dropped at least 60 percent,” says Vikram Aggarwal, the CEO of EnergySage, a company that provides people with financial quotes for installing solar power. That, plus solar panels are more energy dense—capable of producing more wattage—and more efficient now. In a nutshell: they’re packing more power, better efficiency, while costing less, Aggarwal says.

All of that means that it now makes more sense for a carmaker to throw a solar panel on the back of a car, even if it’s a far cry from powering the whole vehicle. “You can cover every inch of the car’s exterior with solar cells—the total surface area is never going to be that much [of a power source],” Aggarwal observes, meaning that the panels are just going to be supplemental.

But Parth Vaishnav, an assistant research professor of engineering and public policy at Carnegie Mellon University, wonders if the cars themselves are truly the best place to take advantage of solar power. After all, he notes, solar energy produced at the utility level is much cheaper per watt than solar energy that comes from a person’s residential solar installation. And putting a solar panel on a car could hypothetically add financial cost to the carmaker, plus complexity, weight, and make the car more difficult to disassemble at the end of its life. Ultimately, a person interested in driving a car powered by the sun would be better served by plugging an electric vehicle into a power source that came from a large-scale solar installation. “If you wanted to deploy solar power,” he reflects, “is the roof of a car the best place to put it?