All the big announcements from Apple’s 2020 WWDC keynote

The online-only event will still have a keynote full of announcements. 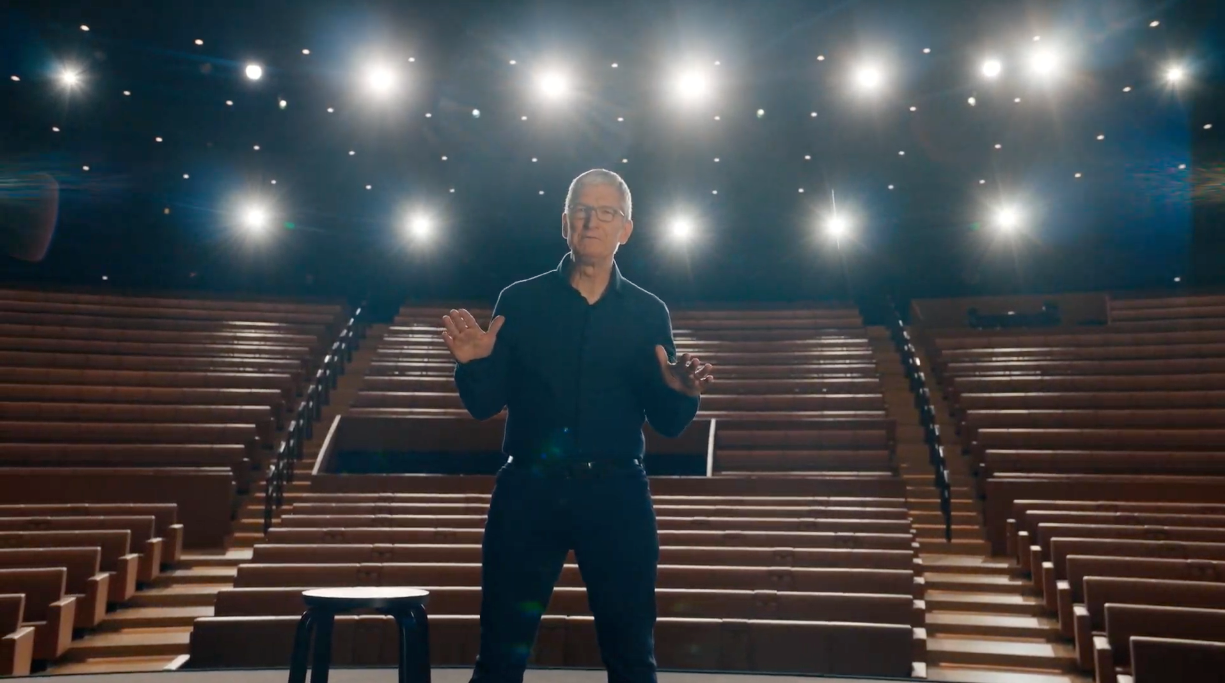 Welcome to WWDC. Typically, Apple’s World Wide Developer’s conference happens in California, but the COVID-19 pandemic has forced it online. Despite the shift to a fully digital event, we’re still getting a full-fledged keynote to kick off the conference, which likely means a look ahead into the future of Apple’s biggest platforms. You can watch along in the video below and keep scrolling for a running log of all the new stuff.

Tim Cook starts the event on the stage in an empty auditorium. The production value is extremely high as you might expect. From a remote viewer standpoint, this is better than the regular live event because it lacks the clapping and variability of a live crowd.

Apple dives right into the updates with iOS 14. The announcements start with the homescreen. The icons can now grow and act like widgets.

The App Library now lives at the end of your homescreen pages and allows you to easily find apps you don’t use that frequently.

Widgets now come in different sizes depending on what information you want to present. The idea of more information and customizable widgets sounds great, but name-checking the cluttered Apple Watch face designs is slightly concerning.

Widgets can sit in your homepage with your apps. Arranging them works like moving apps around. A Smart Stack at the top of the homescreen throws up information from your apps. It automatically decides what you probably want to see depending on your habits and time of day.

iPhone now gets picture-in-picture functionality that seems a lot like how it works on the iPad. You can swipe the picture away and keep the audio playing, which is handy.

Siri’s new look is a lot smaller as well. Instead of taking over your entire screen, the Siri dialog will not rest in a smaller part of the screen. Everything is a widget now. Widgets rule all.

With its new update, Siri is getting access to more direct responses to factual questions. So, you won’t hear “here’s what I found in the web” as often. Siri is getting on-device dictation as well as a seriously upgraded translation function that works entirely on the iPhone. The app intelligently detects the language spoken and allows two people to have a conversation in close to real-time.

Messages has reportedly seen a 40 percent increase in usage year-over-year and group messaging has more than doubled. Apple is giving Memoji users more than 20 new headstyles in case your cartoon version of yourself doesn’t accurately represent the way you look.

Group chats now allow for inline replies so you can thread individual parts of a chain. You can also now mention someone in a conversation, which allows you to specifically ping someone and prevent your message from getting lost in the flood.

The new update will introduce Guides that work with “brands” to give you specific recommendations for places in your area. iOS 14′s Maps update focuses on trying to help users find more eco-friendly ways to get where you’re going. It finally gets a cycling option, which will start in NYC, LA, and a few others. It will route you along bike-friendly paths and indicate altitude change so you can plan for how challenging the ride will be.

Carplay is now using NFC with the iPhone to start and unlock a car. It’s debuting with the 2021 BMW 5-series. You can put the phone on the charging pad in the car and start it without bringing a physical dongle with you. You can loan out the key via the app, which allows parents to restrict access. Apple wants to roll the tech out to any phone using its U1 chip. It’s rolling out a new standard starting next year.

App Clips aim to give users the specific parts of apps they need in a given situation without downloading the whole thing. You can tap your phone on an NFC chip or scan a QR code and launch a small part of the app. It ties directly into the OS, so you can pay for things with Apple Pay and log in with Apple’s integrated sign-in process. Each App Clip will be less than 10 MB and part of an SDK.

Sidebar makes the iPad look suspiciously like a typical system window. Folders and navigation sit on the left, while the actual files and content sit on the right. It’s very familiar.

When calls come in, they won’t take over the entire screen anymore. They will show up in a small notification dropdown that you can swipe away to dismiss. It should make getting phone calls considerably less jarring.

Apple says it has rebuilt search “from the ground up.” You can access it from any app. It searches contacts, apps, mail, files and web searches.

Scribble will now allow users to write into text fields and have it converted to typed text. Improved handwriting recognition now allows you to select written text just like you would with words you’ve typed. I wonder if it will read my terrible writing.

Scribble recognizes both English and Chinese automatically. If the iPad realizes you’ve written a phone number or an address, it can throw out app-specific suggestions about what do to with them.

Finally, Airpods will automatically switch between devices. You can now move around between Macs, iPads, and iPhones automatically without having to resync your device.

AirPods Pro are now getting spatial audio. Apple is adding fixed-field surround-sound to its higher-end earbuds. It tracks the motion of your head, so the sound will always feel like it’s coming from the real world. It will work with Dolby Atmos as well as 5.1 and 7.1. This is pretty impressive for a pair of wireless earbuds and I’m looking forward to trying it.

Apple is updating watch faces so you can share them. You can now discover watch faces in the App Store, on a website, or directly from another user. If you download a face that pulls data from apps you don’t have, you’ll get an automatic prompt to download them.

The workout app will now count dancing. It uses advanced movement tracking in order to keep tabs on the non-consistent movements that happen on the dance-floor. The Workout app now offers a simplified dashboard to give you an easy view of your fitness.

The Apple Watch now tracks Sleep as well. Apple says its taking a “holistic” approach to sleep. The new Wind Down feature aims to help users transition easily into sleep. You set your bedtime and the device will turn on do-not-disturb for your devices and the watch screen turns off completely.

Sleep tracking happens with a machine learning algorithm. It tracks your movement, including the small movements from your breathing as you’re sleeping.

Lastly, the Watch will now automatically detect hand-washing and make sure you put in the required 20 seconds of scrubbing. If you try to cut out early, it will “politely” remind you to get back to it.

Apple is devoting an entire section of the keynote to how it treats your information. More than 200 million users have used Sign-In With Apple since its launch. This year, Apple is allowing developers to “upgrade” their app log-ins to Apple’s system.

Now, instead of sharing your specific location with an app, you can share a relative location. Apps are adding a clearer indication of when the camera and microphone are working. Developers will now need to provide summaries of privacy information that will live in the App Store. It’s like a nutrition label on your groceries.

Apple is partnering with Google and Amazon while open-sourcing Home Kit to make a new standard for home automation. Apple has always made a big deal about how HomeKit devices are end-to-end encrypted.

HomeKit cameras can now let users dictate areas of a cameras’ field-of-view so you won’t get as many false notifications from a doorbell camera. Facial recognition will now also look for people you’ve tagged in your photos.

Apple calls this the “biggest change since the introduction of OS X.” At first glance, it feels like it has a lot more in common with the iPad.

The new macOS even gets control center, so you can easily adjust screen brightness and volume. It feels a lot like a mobile device. Notifications also stack up on the right side and group together. Remember Gadgets?

Apple claims that Safari is 50 percent faster than Chrome when loading frequently visited websites. It has advantages in privacy and battery life, too. Please tell me that the tab presentation is better.

Safari now actively monitors your saved passwords to see if they have been compromised in data breaches. Apple’s browser also now gets compatibility with the Extensions API so developers can port their extensions over from other platforms. Safari also allows users to customize what pages and content extensions can view and track, which is a welcome addition.

Tabs are looking better, but I’m curious what happens when I get 100 of them in there.

Apple is now officially moving to Apple Silicon for the chips in its Macs. We’ve been hearing rumors about this for a long time.

This whole process started with the iPhone, which had an Apple chip inside. It started with A4 and has gone through ten generations and CPU performance has improved over 100x.

The first-party Apple apps are already native to the architecture and Adobe and Microsoft have already begun converting some of their apps to work on Apple’s new hardware. Presenters have been using the new hardware for the entirety of the presentation.

Apple’s Rosetta 2 technology will help translate older apps to the new hardware architecture. The demo includes playing a stock version of a Tomb Raider game downloaded directly from the App Store. iPad and iOS apps now run totally unmodified on the mac without a middle step.

Developers can get a developer’s hardware kit that includes a Mac Mini with the new chip inside.

Customers should expect to see the first Mac with Apple Silicon inside before the end of the year and the transition will take two years. Apple says it still has a couple Intel-based Macs in the pipeline about which it’s very excited. Could one be a new touch-enabled Apple laptop? (No one suggested anything along those lines during the presentation, but it really seems like it would make sense at this point.)

That’s it for now. It’s no surprise that we didn’t get any specific new hardware—the new iPhone typically shows up in the Fall. It sounds like the company has some interesting hardware in the pipeline, however.

WWDC will continue on this week and you can join in more sessions by going to Apple’s WWDC site.