Along with hosting a supermassive black hole at its heart, the center of the radio-loud galaxy Centaurus A is home... 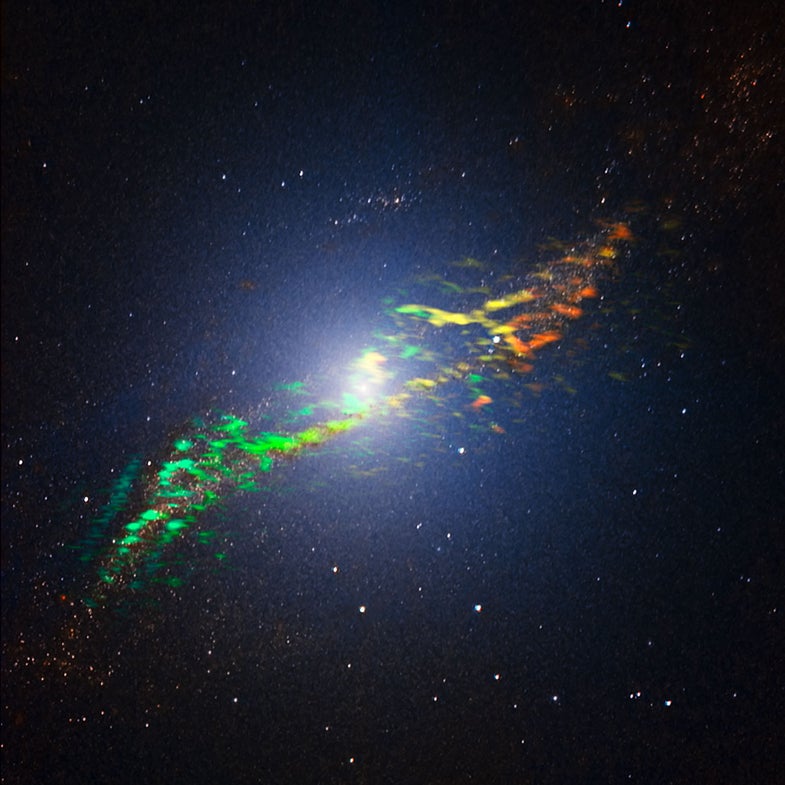 This new image of Centaurus A combines ALMA and near-infrared observations of the massive elliptical radio galaxy. The new ALMA observations, shown in a range of green, yellow and orange colours, reveal the position and motion of the clouds of gas in the galaxy. They are the sharpest and most sensitive such observations ever made. ALMA was tuned to detect signals with a wavelength around 1.3 millimetres, emitted by molecules of carbon monoxide gas. The motion of the gas in the galaxy causes slight changes to this wavelength, due to the Doppler effect. The motion is shown in this image as changes in colour. Greener features trace gas coming towards us while more orange features depict gas moving away. We can see that the gas to the left of the centre is moving towards us, while the gas to the right of the centre is moving away from us, indicating that the gas is orbiting around the galaxy. The ALMA observations are overlaid on a near-infrared image of Centaurus A obtained with the SOFI instrument attached to the ESO New Technology Telescope (NTT).
SHARE

Along with hosting a supermassive black hole at its heart, the center of the radio-loud galaxy Centaurus A is home to a stellar nursery that tells a tale of the galaxy’s past. The presence of a dark band of dust, as well as the galaxy’s powerful emissions in the radio end of the spectrum, suggest it formed in a collision between a giant elliptical galaxy and a smaller spiral galaxy.

But that dark dust band blocks out the galaxy’s bright center, and to see past it, astronomers have to look in longer wavelengths of light. Today’s pretty space pic reveals the position and motion of the gas clouds at Centaurus A’s center, the sharpest and most sensitive images ever made. The colors are the result of the Doppler effect as the gas clouds swirl around.

ALMA can detect signatures with a wavelength around 1.3 millimeters, which corresponds to carbon monoxide. As the gas moves around, it causes changes to this wavelength as seen from here. Greener features correspond to gas coming toward us, while orange areas represent gas moving away. So the gas is obviously swirling around the galactic center in this image.

This image is a combination of ALMA observations and near-infrared observations from the European Southern Observatory’s New Technology Telescope. The Atacama Large Millimeter/sub-millimeter Array is set to be completed last year, but already observations with a partial array are yielding beautiful and bountiful results.